Do Not Mess With The Recipe

They live on tattered 3x5 cards in our recipe files. In fact, we know them so well that we no longer need to pull the card out. We can make the recipe in our sleep.

That is how I feel about the oil pie crust recipe that has been in my family for many a year. I have no idea where it originally came from. Mimi might know. All I know is that Grandma Pringle used it. Mimi uses it. I use it.

Let me tell you the tale of Deb and the Pie Crust. Or, how I lost my religion making a stupid pie.

Lets go way back. Way, way back. OK, this last Saturday morning if you really have to know. HHBL and I were going to have dinner with some old friends.

Hi Linda and Bob!! We had a GREAT time on Saturday.

I was in charge of dessert. I had already talked to Bob and ascertained that French Silk Pie would not be turned away. You never know, some people don’t like chocolate. I KNOW!! How can that be??? So I checked and got the OK. I could have made the pie with a graham cracker crust but I don’t really like it that way. I like it with a traditional pie crust. It is already so sweet that a graham cracker crust just seems like over kill.

And I was already trying to kill all of us with a stick and a half of butter and 4 raw eggs in the pie. Yes raw eggs. Deal with it.

That morning I had already found that I was out of unsweetened chocolate so I had to run out to Wally Mart. I came home, assembled all of the items that I would need to make the pie crust….

And realized that I wasn’t going to have enough milk to make the pie crust AND have milk for breakfast on Sunday. And the pie crust recipe only uses 1/4 cup of milk so that tells you how little milk we had.

Darn it! I don’t have time to run back out to Wally Mart. What to do. What to do. So I rooted around in the frig and came up with heavy cream. I always have some of that around here. We are a family that believes that the words “Low fat, No fat” are baaaaaaaaaad.

Heck, I bet I can use the heavy cream instead of the milk in the pie crust. It won’t make any difference.

I roll out the crust in the same manner that I always do. Mimi and I roll the crust out between pieces of plastic wrap. Works like a charm. And makes it very easy to detach the crust from the wrap and then move over to the pie plate. The crust looks good. Rolls out as usual. Except when I go to move it over to the pie plate the round rips right in half.

There is an old thought that says if the pie is for you to eat the crust will roll out perfectly. But if the pie is for company then you will have trouble. Whoever said this must have been looking over my shoulder.

Grrrrrrrrrr. So I gather everything back up and re-roll. And when I go to move it to the pie plate………it rips apart again. And not only down the middle but it just sort of falls apart into pieces. Lots of pieces.

OH FOR THE LOVE OF PETER, PAUL and MARY!

At this time the dog very quietly went into his house as he felt it was safer to be there. 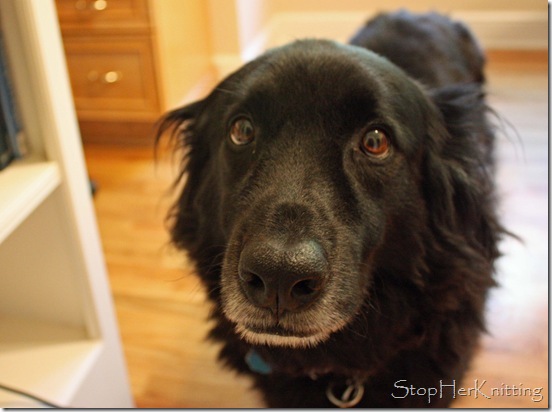 I was very frightened Alpha Male. You were yelling. I don’t like yelling.

I again gather everything up. Mutter wild imprecations at the atmosphere. And I re-roll for the third time. Even when I was learning to make pie crust this has never happened. Never.

Do you want to guess what happened when I rolled the crust out for the third time.

Well first I said my favorite curse phrase. I cannot write it here as this is a family blog. HHBL came and gently inquired what was wrong and if he could help.

I replied in the negative as I was 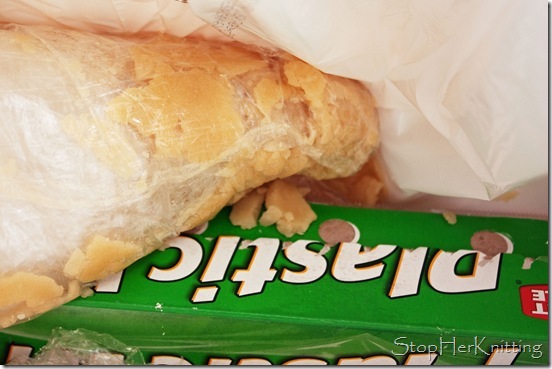 Violently pitching the crust into the garbage. Can you see all the little pieces of dough. There was no way that I could piece the crust together without it looking like something from Dr. Frankenstein’s lab.

And then I stood there for a time and raised my fist in defiance and said,

As God is my witness, I will not be bested by pie dough!!!

What had I done wrong? Why wasn’t this working? And then it hit me. When I had used the heavy cream I had made the pie crust too “short”. There was too much fat in the cream as opposed to the 1% milk that I usually use. Could it possibly be that simple?

Yes, it could. I bit the bullet and used a portion of the very small amount of milk that we had in the frig to make a new batch of pie crust.

And it rolled out perfectly. And the pie was delicious.

The moral of the story my friends.

If it has always worked…..Don’t mess with the recipe.