I Love You Norm Abrams!

Or how I made a bird feeder stand and didn’t totally lose my mind.

I used to have a bunch of bird feeders attached to the railing on the deck. But then came the great attempt to sell Chez Knit. And Joyce the Stager wouldn’t let me keep them up on the deck.

That just ISN’T the look we are going for.

So I have had to content myself with the bird feeders that hang outside my office windows. That was fine. I was good with that. But I wanted a bird feeder on the back deck. And more specifically I wanted a feeder that was on a stand that I could move around. It just seemed like a good idea. And so I began to explore the bird feeder stand options.

I stopped first at my local “All Things Bird” shop. Yes, there were bird feeder stand options. You bought all the pieces a la carte and put together the system that you wanted. When your bird feeder stand is part of a system you KNOW that it is going to cost more than you want to spend. I was not prepared to spend $100+ for the pleasure of feeding the birds and watching them make a mess.

Call me picky. And frugal.

I looked at Wally Mart. I looked at Target. I explored all the varied options on Amazon.

And then I had an inspiration. The light bulb flickered on weakly.

I looked out in the back yard and there I gazed upon something that had been there for a long time. Many years. Out by the bench that looks out over the ravine there was a bird feeder in the shape of a house, on a pole, stuck into the ground.

Hey!! I can use that. All I need to do is make a stand that it can slip into and I will be golden. This shouldn’t be too hard at all. I have watched 20 years of The New Yankee Workshop.

So off to Home Depot I went. I knew what I wanted to do. I knew what I needed. I had them cut the 2x4 into the correct lengths. I purchased a piece of pipe called a “nipple”……..

And the thing that the nipple screws into.

REALLY! Get your minds OUT of the gutter thankyouverymuch.

And I was all ready. 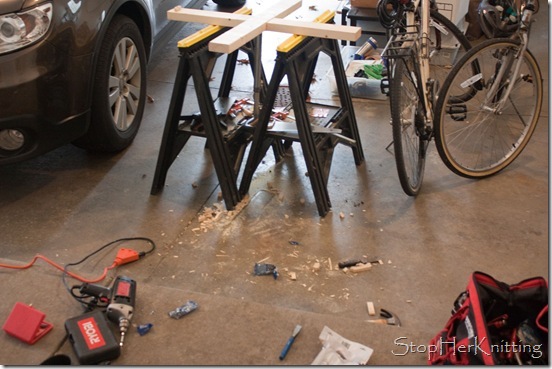 I will admit that I didn’t take pictures though out the process because, well, I was sawing wood very vigorously and it is hard to do that and take pictures. As you can see I am not all that neat a wood worker. I knew that I had to cut the boards so that they could go together like Lincoln logs. A 3/4 inch deep cut that was as wide as the 2x4, in the center of each board. But how to accomplish this? How to carve out a chunk of board when you don’t have a radial saw or a ban saw or anything other than a circular saw which I felt was sort of nuclear for this particular project.

I channeled my inner Norm Abrams, without the power tools mind you, and I knew what I needed to do.

How hard could that be?

Oh hard let me tell you when you don’t have the right tools. I used three different saws and the saw horses and a bunch of different chisels. Several different hammers. The power drill. Did you know that you can chisel out wood with a putty knife and a hammer? I am here to tell you that you can! But when you do it that way you have to give up your perfectionist tendencies because this just isn’t going to be perfect. Not by a long shot. 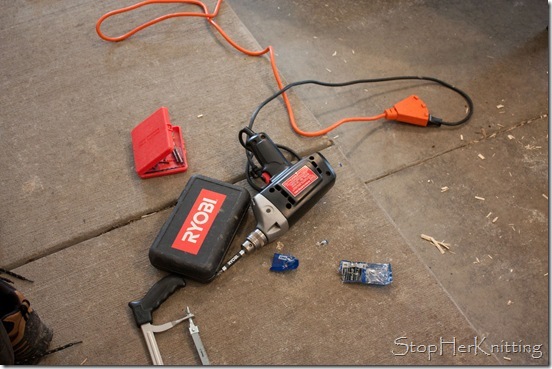 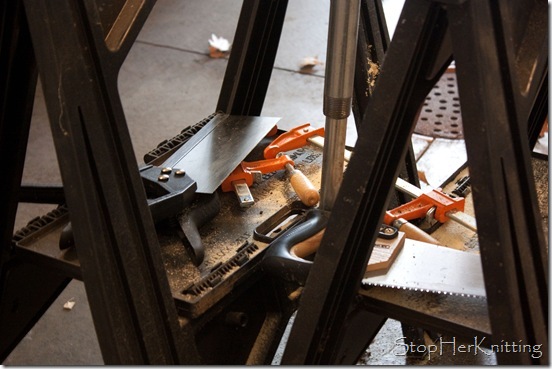 Not perfect and very messy but heck I got to use the power drill so I felt very……powerful. And finally it was on done. The pieces of wood fit together pretty well. I drilled pilot holes and then screwed the pieces together. I add the metal flange and the nipple (hehehehe).

And it seemed a bit wobbly. Most likely do to the fact that my Lincoln log effect wasn’t all that effective due to it not being all that perfectly precise due to the lack of correct toolage. So I improvised. 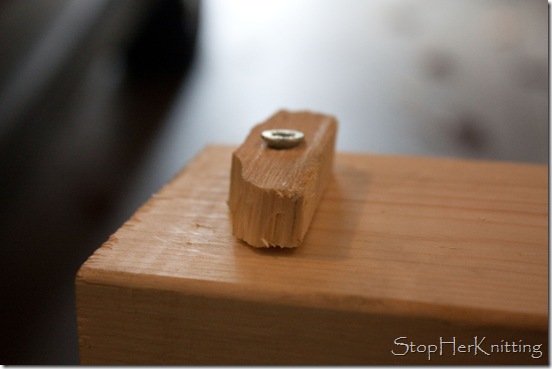 That evened it out enough. All set and ready to pull the bird feeder pole out of the ground, slip it into the metal nipple (hehehehehe) and put it on the deck.

Or so I thought.

D’Oh! It was too big to slip into the metal pipe! Rat turds and fart burgers!! What to do? I know! I will take a heavy hammer (one of the 7 hammers that I own) and pound the bottom part of the pole into a different crimped shape and it will slip right in. 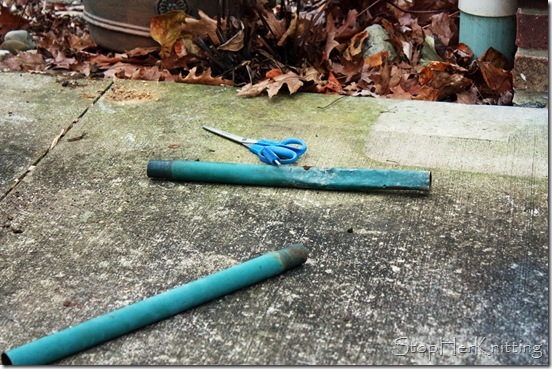 Well that was a bust, as all of you with any mechanical brains would know. I couldn’t fold the darn thing and pounding it just changed the shape but didn’t make the diameter any smaller. Have I mentioned that I have a degree in nursing not one in mechanical engineering.

I could see my fabulous plan fast fading into oblivion. I was about to resort to the age old method of using Duct Tape when I spied it. A pipe that belonged to a wind chime that had long ago fallen into ruin. Hmmmmmm. This looks about right. I bet if I can slip this down into the metal nipple (hehehehehe) and then slip the bird feeder pipe over it we will be golden. 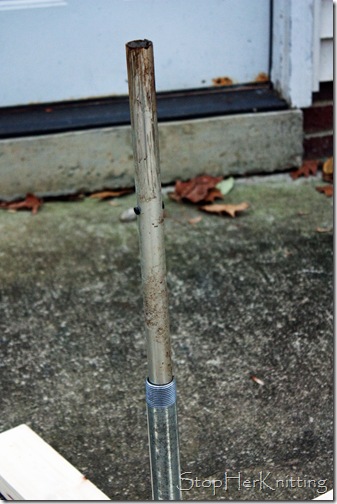 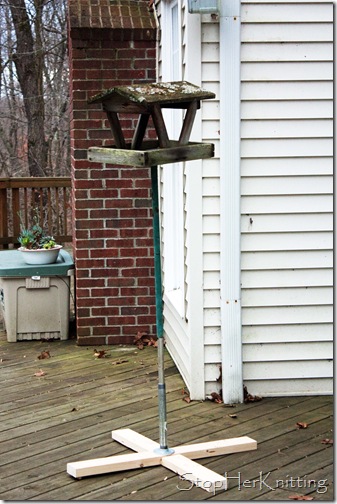 It may be something that would send Norm Abrams screaming into the night. I am never going to be asked to present at the annual Carpenters Convention.

But folks, it works.