Sometimes I find it so sad when something that you remember from your childhood is all of a sudden irrevocably gone.

I feel that way today.

I should tell you that the parental units have lived in the same house for 40 years now. They are fine. The house is fine. But the farm house two doors down is not. 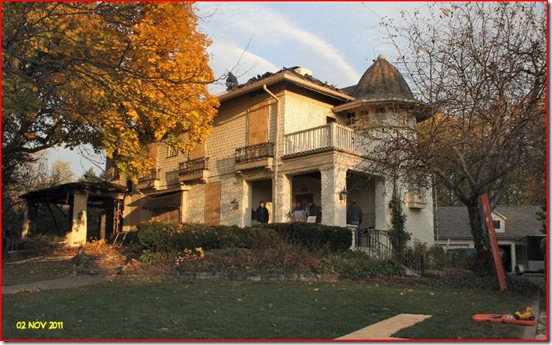 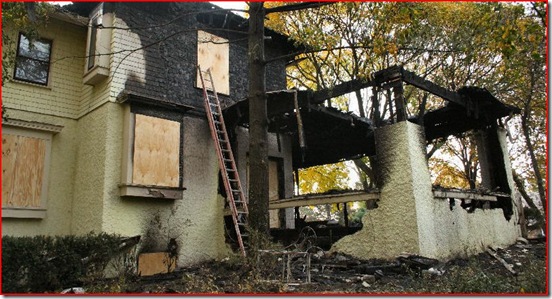 The Farm House predated any other house on the street by many years. Heck, it predated the street itself. Built in 1899 it was designed by Chicago architect Jarvis Hunt. It’s original driveway was bordered by mature trees and afforded a view of the clubhouse for The Chicago Golf Club. I remember my Grandmother Amsler telling me about a wedding that she had been a part of when she was in college in the early 1930’s. She said that is was a lovely place and there were no other houses around.

I used to babysit for a family who lived in The Farmhouse. Their kids were terrors. The first time I baby sat for them the son made a valiant effort to eat a AA battery. More than once.

I quit babysitting after I was done with that job. There had to be a better way to make money.

The house was painted brown when I was growing up. The front staircase was a beautiful curving one that ran up through the turret. The kitchen was large. The basement was scary. It had a wonderful second staircase that was accessed from the back of the house. I have a total and complete fascination with back staircases. I don’t think I will ever have a house that has one but I can always hope. My Aunt Margaret and Uncle Kenneth had one in their house in Washington D.C.

The house had gone through a number of renovations in recent years and had just been sold. The new owners were in the process of remodeling and were not living in the house at the time. That is a blessing.

But my heart is so sad today to see something that I loved so much be gone.

I hope that they can rebuild. But even if they do it will never be the same.