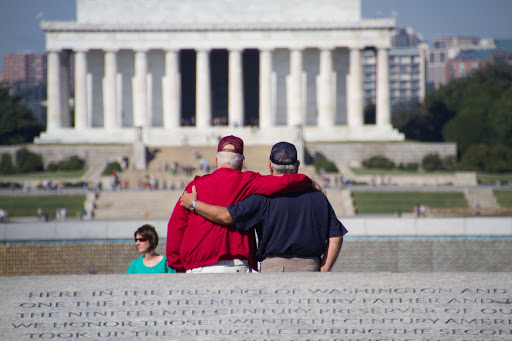 Thank you to all the men and women who have served and serve currently in our armed forces. Your dedication, self sacrifice, time apart from family make our life safer.

This photo was taken on a day to myself in Washington D.C. These two gentlemen, who were part of a large group of veterans brought to D.C. by Honor Flight. They stood their silently, brothers in arms. What you don't see is the picture that I did not take. They had tears streaming down their faces. Reliving their service together? Thinking of other brothers who did not make it back? I will never know.

All I can say is thank you gentlemen the for your service.
Posted by Unknown at 4:29 PM 0 comments

Have you ever thought about the things that most of us take for granted? Like flying in an airplane. Here in the US I think we just make the assumption that we have all taken a plane flight at some point in our lives. Or maybe we don't even think about it.

The reason I bring this up is because yesterday I sat on a plane and the 50 year old man sitting in the row behind exclaimed, in a voice loud enough to be heard over a bunch of rows, "This is my FIRST PLANE FLIGHT EVER! Can you take a picture out your window with my phone. I want to remember this!"

I had to stop and think about this for a minute. He is 50 years old and he hasn't ever been on a plane before? A number of us, myself included, actually asked him if this really was his first plane flight. He replied in the affirmative.

I couldn't imagine that, which just shows you how head in the clouds I probably am. Really, in reality I know that there are many, many people who have never taken a plane to anyplace. They have had no need to go anywhere. They haven't ever had the funds to do so. They are afraid of the thought of sticking themselves into a skinny metal tube with a boatload of other people and have that skinny tube of metal hurl itself down the runway and hope that it takes off successfully....and lands successfully at the other end of the journey.

I took my first plane flight at the age of 10. I have taken countless flights since then, some great and some not so great. Some short and some very, very long. I just can't imagine taking my first plane flight at the age of 50. He had no idea about the "flow" of things after take off. He wanted a drink but didn't understand that he didn't need to call for a drink, that the flight attendant would come around and ask. When HHBL got up to walk around a bit (he pulled a hamstring last week playing baseball), Mr. Plane Newbie was amazed that HHBL could stand in the aisle. And when the plane landed, just a bit rough but not the worst I have ever experienced, he looked at me and said, "Is it always like that?"

Sometimes I think it is really good to be able to see an experience through the eyes of a newbie.

And I hope he has a really good time at Harry Potter World. He was as excited about that as he was about going on his first plane flight.
Posted by Unknown at 1:07 PM 0 comments

Sing That Song of Cicada Love

I have been waiting patiently for the day to come. 17 years I have waited. Other broods have come and gone and been disappointing. But not this time! This time they sing!

It is time for Cicadas. 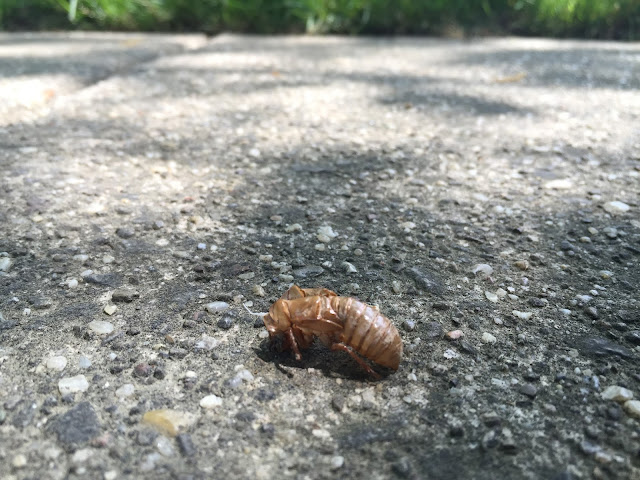 Until recently I thought that I might be the only one who has a an obsessive and overwhelming love fondness for these little creatures. But since I have begun to broadcast my love across the internetz others have come forward to say, in quiet voices full of hope, "Yes, I love them too."

Cicadas are a fickle lot. They don't show up everywhere in a region. They don't show up every year. They have "cycles". This year it is Brood V Periodical Cicadas, in case you were wondering about that. I have no earthly idea what that actually MEANS, other than these little fellows are the love children of cicadas that were around 17 years ago. As I recall, WAY back 17 years ago, we were living in Solon, OH, pre-OCK. The house was older, built in the 1930's and the land hadn't been disturbed for a long time which meant that the cicadas hadn't been disturbed either. I remember a bumper crop of them. But then I also remember other things in life that are colored by time and space so maybe there weren't as many cicadas as I remember. Oh whatever.

The last time cicadas were in the area, we had none, NONE at OCK. We had tons of trees, we had plenty of places where they might have been waiting, but nothing. Nada. Zilch. That was evidently because that particular "brood" of cicadas showed up in pockets.

This time.....I am seeing them everywhere I go. Especially I am seeing them in and around the office. I try to go for a bit of a walk at lunch time, just to get my big fat bahookie out of the chair. This week, I was strolling along, minding my own business when...I saw something on the sidewalk. Was it? Could it be? 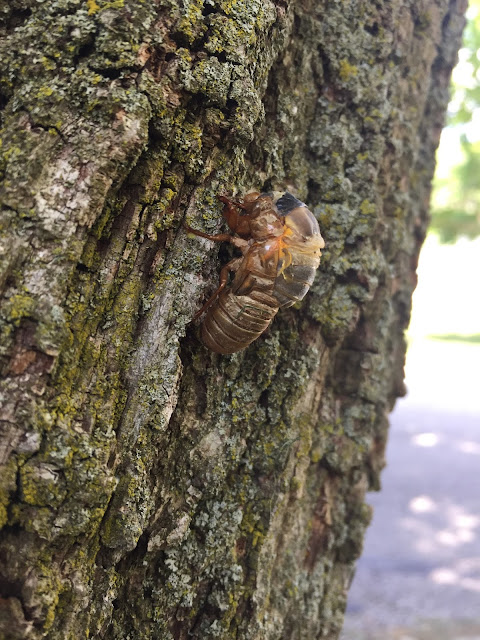 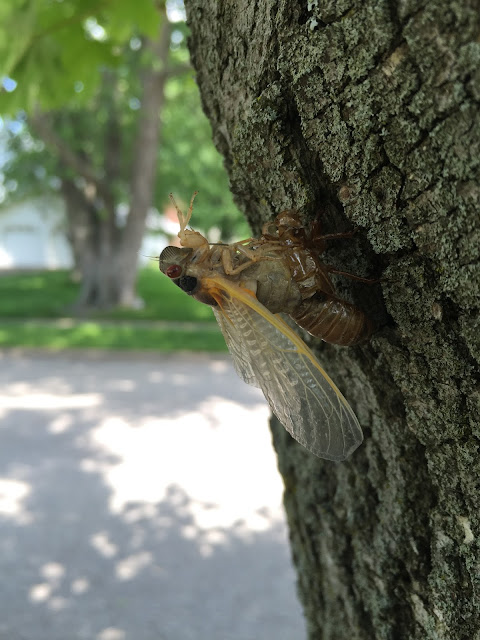 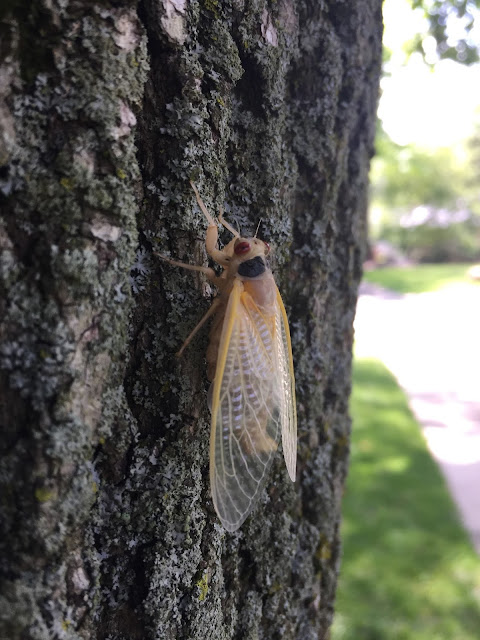 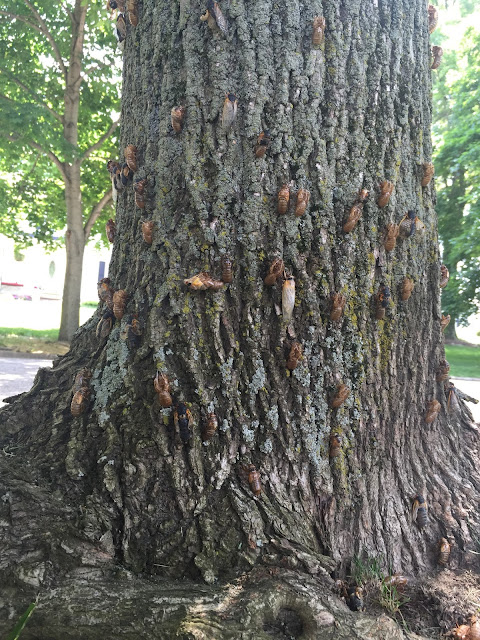 Does it say something about me that I actually spent time on my walking taking pictures of all of the cicadas? We had better not go there.

I think this love for cicadas comes from childhood, from a particular summer spent at The Cottage, 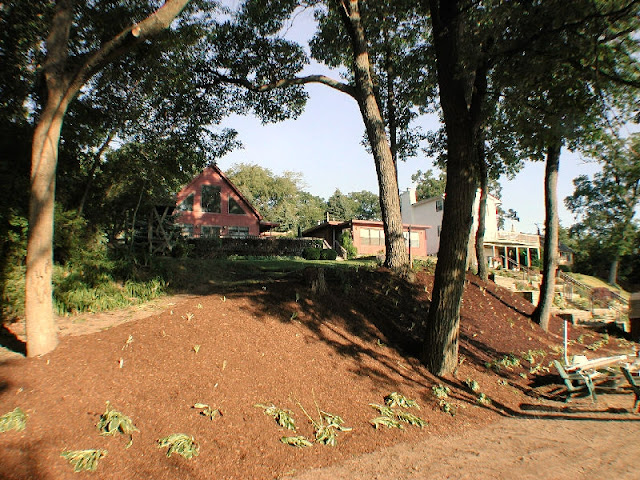 Which didn't look like this when I was growing up. Both of those red buildings comprised "The Cottage" after the mid-1990's. Before that it was just the flat roofed red cottage. There wasn't a TV, if you wanted to do something you went and played in the lake, except for the whole "you can't go to the lake for an hour after you eat because you will get cramps and DIE" thing, which I think was really just the Parental Units way of getting an hour of dry quiet. One particular summer we were spending most of the summer, or so it seemed to me, at The Cottage. Papa was going back and forth to work and we were just hanging around. Bored. Well, if there is something to read I am NEVER bored, and therein lay the issue. I would have just laid on the REALLY scratchy horsehair couch (an entirely different story not told here), sweating and itching and read all day long.

But Mimi is a meany and she actually made me GO.OUTSIDE.AND.DO.SOMETHING. Which is just parental speak for, "You are bugging the CRAP out of me and no you can't have something to eat."

But what to do outside if I couldn't get in the water BECAUSE YOU MIGHT GET CRAMPS AND DIE! Hmmmmmmmm. She handed me a mayo jar with holes punched in the top and told me to go and collect some bugs. SCHWEET! Actually, it might have been that I already had the jar because I had been collecting fireflies the night before. But however I actually came to have the jar I put it to good use, sneaking up on cicadas, grabbing them just at the back of their wings, which makes them buzz furiously and gets their little legs scrambling, and popping them into the jar with all of their other unhappy brethren.

It doesn't take much to make me happy evidently. And this memory is such a happy one for me, but perhaps not for the cicadas, that I have loved them and their noisy song of cicada love, ever since.

No one ever said I didn't have more than one screw loose.