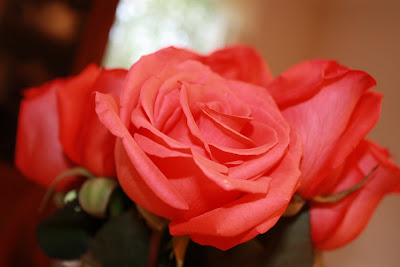 I would have to title this picture "He's Nice Greek Boy".

So Progeny #3 celebrated her "9 month dating anniversary" on Monday. I can hear everyone saying, "Awwwwwwwww." How sappy and sweet these high school, oh sorry, these soon to be college kids can be. So, the boyfriend had told her that he wanted to take her out to a nice restaurant and that since it was closer to his house than ours, would she drive down to his house (30 minutes from us) and they would go from there.

She goes down to his house, they get in his car and start out and then he "realizes" that he doesn't have his billfold and they will have to go back to his house. He thinks he left it on the porch (the porch?). So they go back into the house and out to the porch and there she finds 1. roses (the boy is always giving her flowers) and 2. the table set for dinner. He had not one but TWO kinds of pickles for her, because she loves pickles. He also had both French and Ranch dressings for her salad because she likes to mix her dressings just like her momma does. His parents served the dinner, thanks Jerry and Helene! Then after dinner it was off to miniature golf (which was what they did on their first date a year ago, yes there is a time gap but that is another story) and then back to his house for a bonfire and making s'mores. 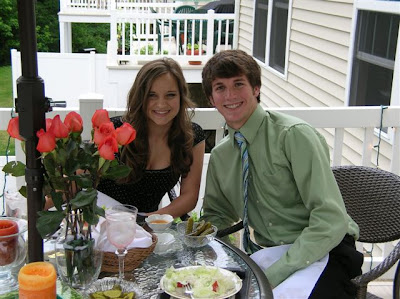