Why are were you having real, caffeinated coffee at 9:37p? Is that not counter productive to getting to sleep? We all know how much I value getting into bed at night and snuggling down under my magic, silk filled comforter. THAT is what I am usually doing at 9:37p, not having coffee. 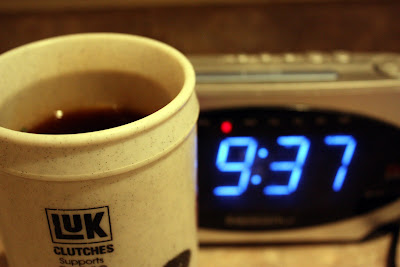 Ah, but you see 12:01a found me standing in a line.....at a movie theater.......waiting to see "Harry Potter and the Half Blood Prince." So, the coffee was necessary, even vital to surviving.

Why, oh why were you doing this to yourself you might ask. Well, it is because of these creatures 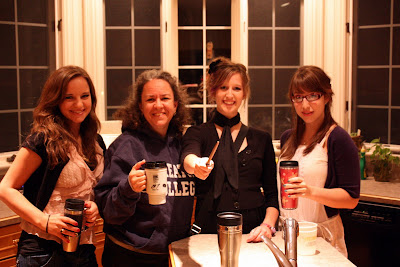 These lovely ladies, one of whom is Shoe Queen (Progeny #3). You see we have a tradition. We have a tradition of seeing the Harry Potter movies for the first time at the midnight show. We have been doing this since HPPA (Harry Potter and the Prisoner of Azkaban for the uninitiated). I was younger then, they were younger then, it wasn't as difficult for me to keep my eyes open past my normal bedtime. I am such a wuss.

This is how I REALLY feel at the moment of leaving for the theater. 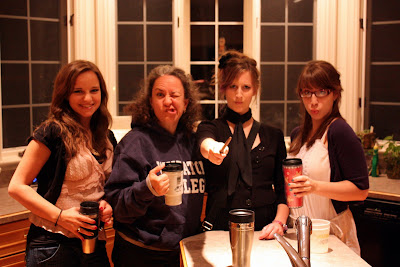 I should have my head examined, really I should. But, I keep reminding myself that we are "making a memory." Of course, we have more than our fair share of these sorts of memories so who am I kidding. It has absolutely nothing to do with making a memory, if anything going to these midnight shows is depriving me of the few gray cells that are still functioning at anywhere near optimal levels. It has everything to do with being a Harry Potter freak, a nerd if you will, an aficionado of the boy who lived. OK, and it is also because I am one cool mom, at least according to Shoe Queen. 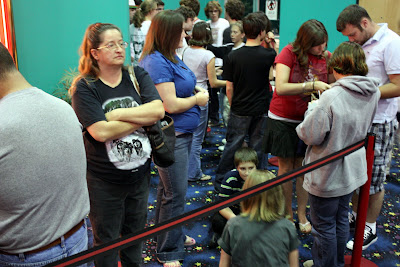 I was certainly more excited about the whole process than this particular woman seemed to be. I have no idea who she was, she will probably never know that I have immortalized her on the internet. But, goodness woman, look happier about this would you. This happens to be the line early on in the process. We arrived at the theater at 10:15p and were not the first ones in the line. OK, we were close to the front but not THE front. Darn it, not the front. We were aiming for first in line but then.....Shoe Queen's friend forgot her book so we had to go back to the house, at a greatly increased rate of speed, to get the book. I like to be first, I need to be first, I....Oh, yes, um where was I? Oh, yes (clearly throat awkwardly), Harry Potter.

So, the theater had showings at 12:01a, 12:02a, 12:15a and 3a all of which were sold out. We had tickets for the 12:01a showing because I went several weeks ago and purchased them, wanting to be first in line...there I go again! By the way, who really wants to go to a 3a showing, 12:01a is bad enough. Where was I, oh yes, we get in line at 10:15p and we wait and we watch and we critique the costumes that some people have chosen to wear. This was an older crowd, there were not too many younger kids and parents which was surprising to me. School is out so there isn't a conflict with getting little Johnny out the door the next morning. However, the age range for the crowd was much more older teens and adults.

Shoe Queen and the Abbmeister are so excited can't you tell 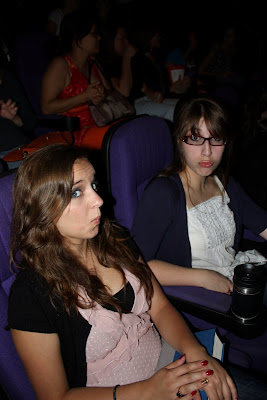 Finally we are admitted to the inner sanctum...and we have the absolutely perfect seats, 3/4 of the way up the theater (we have stadium seating) and right in the middle. See, it pays to get there early, told you. But what to do with the hour that we have left before the show starts? Well, if you are a teenager you......... 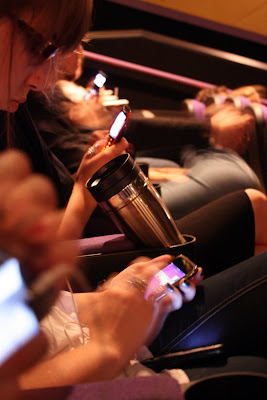 Why you get out your cell phone and start texting that is what. I will admit that I was doing some of that as well, I live for texting.

And so, I will end this post. Having seen "Harry Potter and the Half Blood Prince" and having loved it. But not enough to see it again at 3a like the girls wanted to. Nothing could have induced me to do that. I would, however, see it again at a more reasonable hour. But I am so going to have to take a nap today.
Posted by Debbie at 7:30 AM