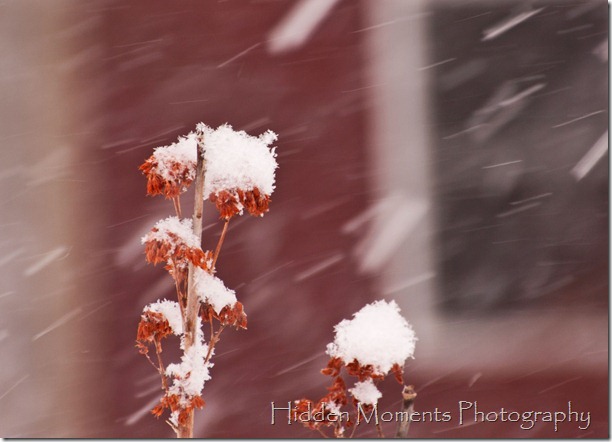 I took a bit of frigid time yesterday to tromp out to the back to practice taking pictures of falling snow. Or in this case, blowing and falling snow. I am not all that accomplished at catching a lovely snow falling bokeh effect. And yesterday didn’t help ALL that much to advance my knowledge because no matter how much I wanted it to, the snow wouldn’t just fall gently. It had to blow as well. Living here in the Frozen Northeast Ohio we have PLENTY of opportunities to witness falling snow. And to make it even more special Chez Knit sits in the snow belt which means that we are one of four places in the US that gets Lake Effect snow. That is when cold air from Canada comes down over the relatively warmer water of Lake Erie, picks up moisture and then dumps all that moisture, in the form of snow, onto certain areas.

It snowed yesterday. A LOT. I am guessing, based on  a visual, that we received around 7-8 inches of the white stuff.

And in case you were wondering. The other three areas in the US that receive lake effect snow are…..

Did you guess what all four areas have in common? Besides the snow that is. Cleveland, Buffalo, Erie and Muskegon (well really Western Michigan along the lake) all are in the Great Lakes Region.

Aren’t you glad you know this. You can thank me later when you win on Jeopardy.