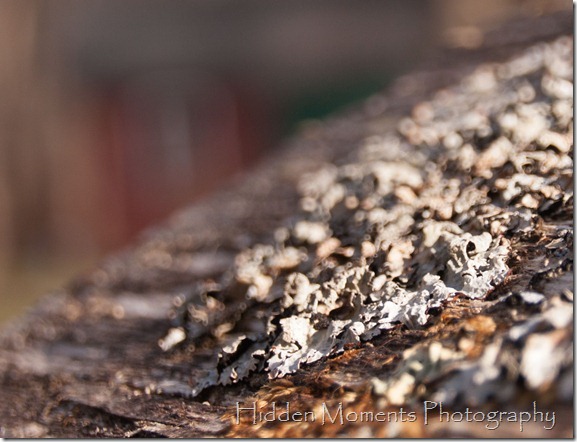 My McGyvered bird feeder that sits on the back deck is no thing of beauty. Norm Abrams would take one look at it and run screaming back to the New Yankee Workshop. The birdfeeder and its permanently attached pole used to be stuck in the ground just inside the woodsy area right at the edge of our ravine. I had ideas about putting birdseed in it. And I did put birdseed in it for a while. But I didn’t think about the fact that it was right at nose level for the deer who would nightly come to the seed buffet that I so kindly put out for them. And besides, in the middle of one of our ultra snowy winters who wants to tromp out to put feed into the thing, sinking deeply into the snow on the way and hoping that there isn’t some dog bi-product hiding under the snow. So I abandoned it and there is sat for many a year, empty and lonely.

But in those years something happened to the birdfeeder, specifically to the roof. Lichen grew on it.

I was walking by it this afternoon and the light was shining right on it in just the most loveliest of ways and I ran to take a picture of it.