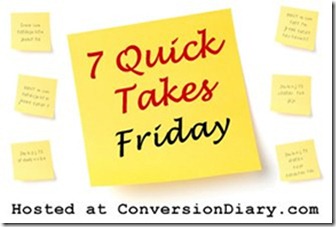 Egads where did the week go! As Calvin from Calvin and Hobbes says, “The days just FLY by”. Yes they do. Remember your blathering orders. When you are done rolling around in what I present here you need to click on the picture above to be whisked, at the speed of Lance Armstrong’s rapidly diminishing reputation, over to Conversion Diary to see what is going on.

May we blather together for ever and ever.

1.
Can I just express how much I hate waking up with a headache. Those are the kind of head aches that take forever, and a lot of Ibuprophen, to go away. And I know my headaches. When I was so sick in high school I used to get these headaches that were relieved only by banging my head against the floor.

This one isn’t THAT bad…but it isn’t pleasant either.

2.
Last week we received word of the unexpected death of an old and dear friend. She was only 54 and was not ill which makes her home going all the more incomprehensible to those of us left here. But she walked with the Lord and so I know that I will see her again, most likely arm in arm with Auntie Jane who was a close friend.

Geri was one of the sweetest women I knew. The Thanksgiving that I was VERY pregnant with Cartoon Girl we all had dinner at Geri and Henry’s house and Geri was determined that if she got me to walk long enough after dinner that we could jumpstart labor. She almost managed it.

I am reminded to live every day to it’s fullest as we do not know when the Lord will call us home.

3.
I spent part of yesterday beginning the big scrap book area clean out. There will be a longer post on that next week just so you are warned about it. I may not be DONE until next week there is so much down there that needs to be gone through. Thank goodness I have somewhere that I can post and sell some of this stuff. In fact I have already sold several items to a friend who is deeply into scrap booking.

Always glad to feed SOMEONE ELSE’S addiction AND get rid of some of my own stuff.

4.
Can I confess something to you. HHBL and I had omelets for dinner last night….

And it was the first time that I had EVER made an omelet. EVER.

I KNOW! Astonishment. I don’t know why I haven’t ever thought to make one for myself or for the two of us for brunch or dinner but I just hadn’t. HHBL actually makes omelets quite frequently for his breakfast, Eggbeater omelets but that still counts. And no I do not make his breakfast, he eats a bit later in the morning than I do.

But yesterday I was standing in front of the refrigerator, letting it defrost as I scratched my head at what I was going to make for dinner…..and I thought OMELET!

And now I must further confess my ultra secret shame…..

I had to GOOGLE how to make one. Yes, I surely did. I knew it would be easy to do but I just had to know the process. I didn’t want to screw it up or anything. I make my own bread for the LOVE of Peter, Paul and Mary so an omelet cannot be THAT hard to produce.

But they were delicious and I am sure that we will have them again sometime.

And I feel so relieved that I actually know how to do this that I want to make an omelet every day. But I don’t think my cholesterol would thank me.

5.
All week I have been asking myself the question…

But then my Knit Sib Barb reminded me, “Because it will look so pretty.”

Yes, there is that. I will remind my fingers and joints of that as I labor on.

When it is a bit further into the process I will post a picture. But I can tell you that already I am calling it.

Moonrise over Lima in honor of this picture. 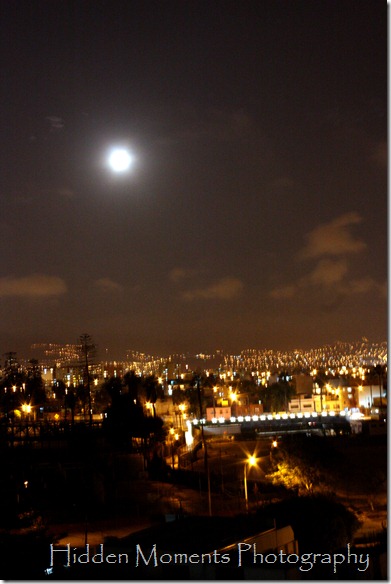 6.
We had a house showing this week.

Nothing came of it. AND they said they didn’t like the floor plan which is the first time anyone has ever said that. But there is a house meant for everyone and this wasn’t the house meant for them I guess.

I try not to get discouraged. The market is looking up I tell myself.

But it is hard.

7.
This is why I love my church. It’s heart is so incredibly big.

Rahab gifted with van from CCC Students from Tha Porch on Vimeo.