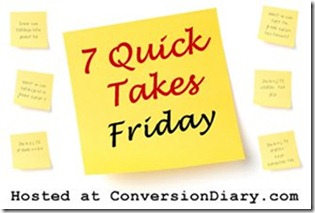 Welcome to a gloomy Friday here at Chez Knit. The rain is falling, the snow is melting into ugly islands of grayness. I sound like Eyeore! Once you have wrapped yourself in the warm blanket of blather that I provide remember to click on the picture above to be whisked, at the speed of the rapidly spreading flu epidemic, over to Conversion Diary to see what everyone else is doing.

Remember to wash your hands and blather frequently during the day.

1.
Can I just say that the 365 photo project is harder than I anticipated and I am only on the second week!! It isn’t that I forget to take the photos. It is that I forget to actually post them. So again today there will be two photo posts.

Well they say that it takes a month to cement a habit so hopefully by the end of January this won’t be as difficult as it seems to be right now.

2.
The parental units were here for an overnight visit this week. I had them pull their car into the garage to avoid the ice that is still resident on the driveway.

And my mother still managed to slip, fall and bloody her head! She was getting something out of the back of their mini van and when she went to close the hatch, as she raised her arm she also took a step back….

And down she went.

Dad and I didn’t even see or hear her fall, even though we were both right there in the garage. I was unaware that she had fallen until I heard her moan and say she hit her head. I thought she had hit her head somehow on the hatch door but when I looked up I couldn’t see her. And then Dad and I realized about the same time that she was actually down on the ground and clutching the back of her head.

She sustained a small “nick” that bled for a bit but seemed otherwise OK, or at least that was what she was telling us. But let me tell you  that it makes the heart skip a beat to see your mother on the ground!!

3.
Did you watch the start of the new season of Downton Abbey? Of course we all know that I did. Since we no longer have cable and therefore no longer have a DVR (yes I know we could BUY one) I actually stayed up until the unheard of hour of 11p to watch the whole two hours.

And then I did something that I don’t normally do. I googled “Downton Abbey Season 3 synopsis” and I hit the mother load. We all know that the third season has already been shown in the UK. In fact Shoe Queen has already watched through all of the episodes. There are ways my friends, there are ways.

But I just had to know what was going to happen next week. I just had to know. And the sight that I eventually ended up on…well…..it had detailed, and I do mean DETAILED, synopsis of all the episodes for the season plus the Christmas special.

And I just couldn’t help myself. I just couldn’t. I read every one of those synopsis. I read past MIDNIGHT! And I now know all that is going to happen to the Granthams and the Crawleys and all the other characters.

Oh what a season is in store for us.

4.
January ennui continues here at Chez Knit. I allowed myself an entire day yesterday where I did nothing at all. Nothing except read and knit and watch movies on the TV.

And I didn’t even do the dishes.

5.
Today I cast on a sweater using some of the lovely yarn that I brought back from the last trip to Peru.

It just seems like the right day to do it. The clouds are low in the sky and the rain is falling. A dreary day that needs to be brightened by the thought of a nice, warm sweater knit with soft alpaca yarn.

I spent a bit of time yesterday deciding what pattern I wanted to use. For those who are non-knitters you cannot believe how much time we in the knitting cult community actually spend contemplating what pattern should go with what yarn. It is an extremely important decision! Some might call it obsessive. I just call it careful. There isn’t too much worse in the knitter’s mind then getting to the middle of a project and realizing that the pattern and the fiber just aren’t getting along and would like to break off the relationship before it becomes permanent.

But I found the perfect pattern and I did my swatch and I checked my yardage and we are good to go.

I will admit to being rather loosey goosey when it comes to swatching before some projects. Socks and lace? Never. But for a sweater? Then…..I swatch.

6.
The other thing I am going to be doing today is inventorying our DVD collection so that I can remember what we actually have….and don’t have.

There are some DVDs that have gone missing over the years and I can never remember which ones we don’t seem to have until I actually want them. This way I will know what we have and what we need to REPLACE and what we want to purchase.

Any excuse to set up and use a spread sheet!

I was born to spread sheet.

7.
I am hoping that “Anonymous”, who commented last week asking me about my thoughts on Harry Potter will comment again, or better yet will email me, to let me know if yesterday’s blog post was helpful to her.

The comments I received on Facebook were all positive so far though negative feedback doesn’t bother me as long as it isn’t snarky. The Harry Potter series is a controversial subject for some.