Hey did you know that the 40th anniversary of Woodstock is this weekend. Do you feel all trippy and groovy knowing that.

I am going to admit that I have only vague memories of that particular event, I was only 9 years old at the time I must remind you. But I can tell that in no way do I wish I had been there.

The Mud: I am enough of a clean freak to just freak out looking at the pictures of the mud. There are people sleeping on the ground and rolling in the mud and some of them (a lot actually) seem to be clothed as God sent them into this world. Sorry folks, that would not do in my world. We wear clothes and we clean our feet thank you very much. And there is no way that I am sleeping on the ground without a tent, sleeping bag, pad to put the sleeping bag on and perhaps a Hampton Inn to surround the tent. I have standards after all

The People: Even if I could get past the mud/dirt issue there is no way I would be there because, excuse me, there are like a bazzillion other people there as well. Ask HHBL how I do in really tight crowds. It isn't a pretty sight I can tell you. I am, as the politically correct idiots would say, vertically challenged. All the rest of us who don't buy into the PC stuff, we just say, "She a tad on the short side." And because I am short (5' 31/2") I have trouble seeing over large crowds of people. I need to see where I am going. Besides, I just don't like large crowds. I can't move along at the pace I want to because with large crowds of people there are always the people strolling along and I am always behind them. Someday I will tell you about the little old lady that I got stuck behind on the way to the bathroom at Versailles. She was strolling and she shouldn't have been because she had poop running down her stockings. Hmmmmm. I digress.

The Music: I am going to confess here and now, I am not a big fan of live concerts. Now if it is a classical music concert or something where I know that they are going to play the piece AS WRITTEN then it is awesome. But, if you are going to wander all over a song and be all ad lib, I am not signing up for that. And since, as far as I can tell, the musicians at Woodstock were often times trippin' on something as well as tripping over their songs......you get my drift. 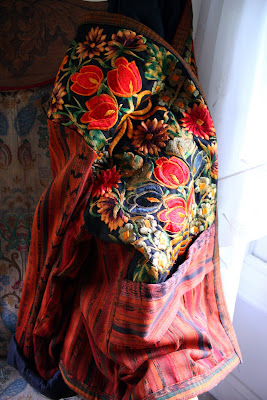 This really is the most awesome jacket. It is warm and bright and has large pockets. For some reason the progeny run screaming from the room when I put it on. They beg me not to leave the house and if I do they beg me not to go some place where I might actually be seen in it.

I live to annoy. Just like all the people who attended Woodstock and have yet to let us forget it.
Posted by Debbie at 5:17 AM