The Best Meal You Evah Had

So, I was turning my brain to mush several evenings ago with some watching of the TV and I came across the Food Network show The Best Thing I Ever Ate. And it got me to thinkin'. Don't get scared about the thinking part, I do this occasionally and then I am done with it for a while and go back to wondering if whales sleep - I did ask that question once in the presence of HHBL and he has never let me forget it (whales DO sleep, I looked it up).

I digress as usual. So, I began to muse on the best thing that I ever ate which quickly expanded to the best meal that I ever ate. And then it hit me, really all the "best meals that I ever ate" were all connected to people in some way. What I remember as the best meals "evah" are all wrapped up in memories of the people that I was with at the time. That doesn't necessarily mean that I was sitting in a restaurant either, although there are those memories. No, the memories are all wrapped up not with the food but with the company.

Stellar meal had while in the company of HHBL at Mama's Fish House on Maui. The good company, the amazing piece of Mahi Mahi and the sunset. I can still taste that fish! Oh this place is so worth the going to but really, it was the whole experience with the hubster and the fact that we had been having such a good week at a family reunion and then the prospect of getting on a plane for Australia. You get the picture.

Then there are all the many "best meals evah" with family. It isn't about the food, although there is usually GREAT food especially when The Chef (my SIL) is cooking. Oh we eat good then! Or when Pilot Man does one of his homegrown turkeys on the grill. The skin, all crispy and juicy and smokey could make a vegetarian throw out their vegan burgers and exclaim, "What was I thinking, I will eat Meat from now on!" Just the mere thought makes me drool like Pavlov's dogs. 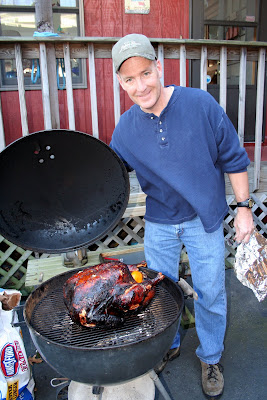 Pilot Man and the amazing turkey. It gave it's life for our pleasure 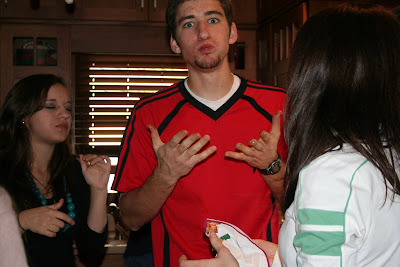 The future son-in-law enjoying the turkey that gave it's life for our pleasure. Notice Shoe Queen's look of ecstasy usually only reserved for high heeled shoes.

Oh and then there was the meal at the local Brazilian steak house where we went with some good friends. This place was a vegetarians nightmare. They walk around with about 16 different kinds of meat and you can have as much as you want. Just put the little disc that they give you "green side up" which tells the servers that you are ready to consume vast quantities of cooked meat until you burst. Then turn the disc over to the red side which tells them we are going to stop for a time so that we don't yak something up in the aisle. Then green, then red, then green....you get the picture. It wasn't just that we ate until we all had "pregnant meat belly" (although we did), it was the good time that we had being together. OK, it was also the fact that we could eat all that meat.

This principle can also apply to the worst meals "evah" you know. There are a few of those as well. Like the time that we had went into Chicago with friends, attended church at Moody Church and then went up to have brunch at a certain kitchy restaurant. We went in, put our name on the list and waited.....and waited......and waited......and waited. Half an hour went by, an hour went by, and we were closing in on 90 minutes when my father started to observe what was going on at the front of the restaurant. How interesting, people were coming in and being seated....but, there seemed to be money being exchanged right before the seating process. This was (and IS) Chicago by the way and that is the way that they did (AND DO) things in Chicago. Now you have to know that by this time we were all about ready to gnaw the hind leg off an elephant, and my father was NOT very good at waiting, I am surprised he lasted that long. We were eventually seated, we were so hungry that we cleaned out the salad bar like locusts on a field of wheat AND when we got home my father wrote one of his famous letters, you know, one of those letters that reads in velvet tones but strikes fear in the heart. Oh YEAH, one of THOSE letters. Hey, we got a free meal out of it...for all 8 of us...and let me tell you, the experience at the time was terrible but we remember it with laughs now.

Or perhaps the time that Uncle Dean decided to tinker with the ice cream recipe and ended up with what can only be described as banana strawberry ice cream butter. It was REALLY smooth going down. Sorry Dean but I have to confess that most of my bowl was dumped behind the garden. But I still think of that time fondly and laugh sometimes.

I could go on...and on....and on.....talking and thinking about all the glorious meals that I have had but I am getting hungry and I need to go to the grocery store. Take some time to think about the best meals that you have had "evah" and I bet you will find that it wasn't the food that was served but the company that you were with that made it so special.
Posted by Debbie at 9:10 AM