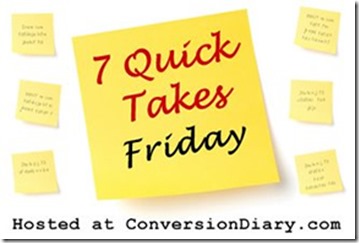 Well here we are, another week under our belts. Another dose of blather awaiting. This week 7QT is being hosted over at Camp Patton because Jen at Conversion Diary decided to have a baby! You know what the rules are around here on Fridays. When you are done completing your blatherous mission you need to click on the picture above to be whisked, at the speed of the ever expanding ranks of weeds in the back garden (LL doesn’t allow weeds in the other garden), over to Camp Patton.

“I’m the Blathers mother” (points to you if you know what movie that is sort of but not really from. Cartoon Girl you don’t count cuz you know).

1.
This time of the year I always have the internal debate as to whether I should dispense with the flannel sheets for the season or extend their usage a few more weeks.

You may laugh but this is really a very important decision, at least for me as a post menopausal woman it is. If I am too hot at night I will not sleep. And we don’t want that to happen do we.

The decision sort of made itself on Tuesday which is my normal washing of the sheets day and it turned out to be 76F.

And it was really warm in the house by the time evening rolled around.

Well, that is what extra blankets are for.

My life is just one crisis after another.

2.
You all know that Cartoon Girl and I love movies. And we talk about movies. And we discuss movies. And one of the movies that we hadn’t been able to discuss because I just hadn’t gotten around to viewing it was Prometheus, the “yes it is a prequel no it isn’t a prequel” to Alien also by Ridley Scott. The Alien series is one of my favorites (well, except for Alien 3 which is not, in the least, a fav). But Cartoon Girl and I differ on which one we like best. I love Aliens (#2), she loves (Alien) #1. I for some unknown reason also like Alien: Resurrection (#4) and she definitely does not.

But I think that we are going to agree on Prometheus.

It was a stinking pile of doo doo. Ridley Scott tried to take the close in creepiness of Alien, combine it with the big budget feel of Aliens, borrow all the iconic images from the first two movies, throw in a bunch of CGI effects and hope for the best.

If he cooks like he made this movie then they don’t eat all that well at his house.

But I had to watch it because I don’t like to have an “empty space” in a series of movies. However all I could think, when the credits FINALLY rolled, was that I was so glad that I got the movie from the library for FREE rather than having actually paid to see it.

After I was done watching it I had to watch something else just to get the bad taste out of my mouth so to speak. I needed a movie that was actually good and well crafted and well acted.

And I had a pile of GOOD movies from the library.

So I chose Rebecca. It was actually a toss up between Rebecca,  Shadow of a Doubt, She Wore a Yellow Ribbon and Fort Apache.

Max DeWinter won out but Uncle Charlie will go into rotation today.

Oh Joseph Cotten how I love you in all your smiling evilness.

3.
And speaking of movies, I have been on a musical soundtrack obsession for the past several weeks. I have A LOT of soundtrack music.

I know you were dying to know that. I try to keep you happy.

Who knows what will take over my iPhone next week.

Perhaps P!nk and Pitbull…..which are VERY different from musicals.

4.
We have had rain and rain and thunder storms and more rain the past three days.

I really love it when it rains for an entire day.

My perfect weather scenario would be one full day of gentle rain a week and then the rest of the time it could rain just at night, gently, from around 10p to 5a. Add a bit of thunder to that and the weather would be perfect.

My walking buddies didn’t agree with me but it is what it is.

5.
And talking about #4, the weather is a gardeners friend…….

Except when it isn’t.

Like now when LL and I would like to be working in the garden and the weather doesn’t cooperate.

Oh well, it is good for the spinach, peas and radishes which have already been planted.

And it gives me more time to get the potato pots sewed. We liked the whole growing potatoes thing last year and wanted to do more potatoes in pots but don’t like the cost of the premade pots.

So I am making some out of heavy burlap. Or I will be….when I have purchased the burlap.

6.
We had a second showing on Sunday afternoon.

It will come to nothing beyond that I am afraid, at least if the feedback is to be believed.

And another house in the development sold in less that 28 days.

And another house that is right outside the development sold almost as fast.

It is depressing. And makes me think what is wrong with Chez Knit.

But if I claim that Christ orders my footsteps then I have to believe that we are not yet meant to sell Chez Knit.

It is hard not to get depressed sometimes.

And it is hard to really be down when a Howard Keel is singing about “Sobbin’ Women”.

7.
HHBL and I have 10 friends coming for dinner tomorrow night.

And I am experimenting with dessert.

I am combining aspects of two different desserts and hoping for the best. Strawberries and chocolate are good together. And I am just crazy enough to experiment with food when people are coming over for dinner. Most of the time it works well…..

Most of the time.

But we won’t talk about the time we had the entire office over for a Christmas party sit down dinner and I decided to cook Pork tenderloin when I had never cooked before. And at the last minute decided that it needed a sauce.

I don’t remember what the sauce was exactly, only that it wasn’t all that good.

But this is not that time.

And if you are coming to Chez Knit tomorrow night and are reading this, don’t worry!!