What is errata you ask?

Errata is a list of errors and their corrections inserted, usually on a separate page or slip of paper, in a book or other publication (according to Dictionary.com)

When you are a knitter, as we all know I am, you like to have your stitch counts and then patterns that you are knitting come out right in the end.

And the occasional curse word….not that I would know about that or anything.

And you see, I don’t like to admit that I might not be doing something correctly. I don’t like not to be perfect. A failing I know and one that gets me into trouble more than I would like. 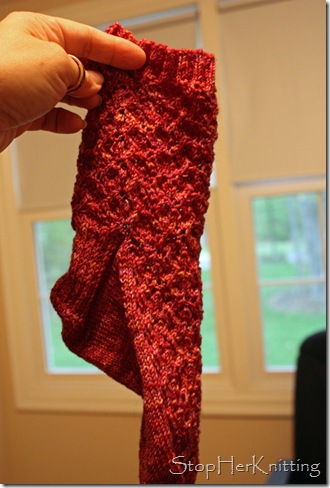 This is Glynis, a pattern by the genius who is Cookie A. Glynis is a very easy pattern. Very lace like. The pattern just flies by. Or at least it did until I started to knit the instep (which is the top of the sock for non-knitters). The foot is just plain stockinette stitch so no problems there. And the first 7 rows of the instep repeat were fantastic.

And then there was row 8.

And can I just take a moment to digress and say that knit 3 together is a tool of the devil and has been sent down to make me crazy and mean and nasty and want to throw up my hands and say, “Forget it! I am going to Wally Mart and BUY some socks!”

only I kept coming up with two stitches left.

Count the stitches. I have the correct number. Look over what I have knit and check it with the pattern muttering under my breath, knit,knit,knit 3 together Ihatedoingthese, knit, YO…..

The first time that it happened I will admit that I just couldn’t figure out where the mistake was. That should have clued me in. But I just figured I would fudge a bit and it would be OK. I will just do that last Knit 3 together as a knit 2 together and everything will be hunkie dorie fine.

On to the next repeat, get to row 8…and the same darn thing happened. What the HECK???? Review stitches, review pattern. So I fudged again in the same way. And I did it again on the third repeat….and the fourth repeat….and the fifth repeat. And then I just figured that I would do it the same way on all the repeats (8) and call it a day. I will say that I had some doubts because the sock didn’t look exactly as I thought it should but I figured that all would be forgiven when I washed and blocked them.

And then when sock #1 was done I had the brilliant idea to go to Ravelry and check to see if there were any errata listed for this particular sock pattern.

And this is where I say that I love, love, love Ravelry. Because everything and anything that you need to know about a pattern can be found there. And sure enough…..

There was errata. The chart had a knit 2 together written as a knit 3 together. And that made all the difference.

But then…..there was a dilemma. I knit sock #2 using the errata. And it is beautiful. But it’s ugly country cousin wasn’t. And as I was knitting sock #2 I was also having a running conversation with myself….

Picture two knitters with socks on the needles sitting on my shoulders. One dressed in white, one dressed in red………

Bad Sock Knitter, "I think that other sock looks just fine. So what if the pattern isn’t quite right. No one will ever know.”

Angel Sock Knitter, “But you will know Deb. You need to frog back and re-knit.”

Angel Sock Knitter, “But you will always know it is there and it will drive you insane.”

Bad Sock Knitter, “Shut up, she won’t care. Those socks will be inside her clogs anyways and no one will see them.”

Angel Sock Knitter, “But SHE will know.”

Can you guess what I decided to do?

Yup, I frogged back an entire sock.

That is why this post is so late in the day. Because I just had to do it before I wrote about it. I know that I am going to be happy that I did it but let me tell you, pulling out 10-15 hours of work is just painful in the extreme.

But I will be happy that I did it in the end.

But I needed an extra cup of the Elixir and some chocolate to get me through.

But on a lighter note…. 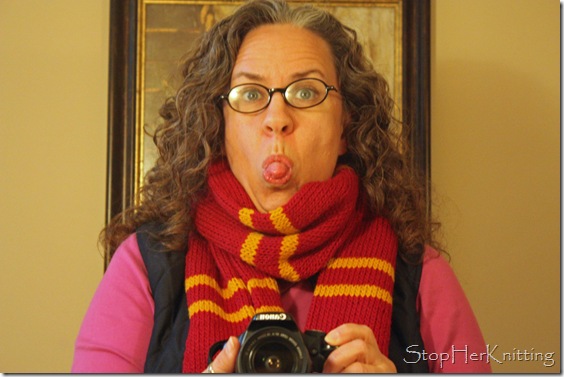 I finished my Gryffindor Scarf. Now Nov 19 can come…….fast!