OK, I have been tagged. Not once but twice. And by two bloggers that I love so I will participate even though to talk about myself is such a wrench.

What? I sense some disbelief coming from my computer screen. But it is true. It is one thing to talk about whatever comes out of my pointy little head and totally another to answer questions that someone else has asked.

This is what I am going to do. I am going to answer all the questions in one post. And then I will tag. And I apologize in advance to those I tag. You have to play. You love me, you know you do.

First up are the questions from The Mom Chef who I have known for a long time. She talks about awesome food over at her blog. You must go over there.

1. What's the best live event (concert, comedian, etc.) that you've ever attended and when/why?
OK, I am not a big live concert person. I know that makes me odd, or more odd than most people think that I already am. But I have to say that the best live event that I have ever been to are the ALDS, ALCS and World Series games that HHBL and I have attended over the years. There is absolutely nothing that can beat the energy and excitement. And the fact that I absolutely love baseball doesn’t hurt either. There was one game, 1997 I think, where we were at the ball park until almost 2a when Tony Pena finally hit the game winner. It had rained. I was cold and wet. It didn’t matter. I was horse for days. It was the most awesome thing.

2. If you were given the opportunity to cook alongside any one professional chef, who would it be?
Well, we all know that the standard answer would be Julia Child right? I actually would just like to sit and talk with her not cook alongside. I have a feeling that, however approachable Julia Child would be it would still be too intimidating. I would actually have to say that given the opportunity I would like to cook alongside Nigella Lawson. That way she could just talk all the time and I could just listen. And besides, I just love to watch her cook. Doesn’t it seem like she just loves food and loves cooking. It is mesmerizing.

3.  When you were growing up, what did you want to be? Are you doing that? If not, what?
You know, I think this might have been the hardest question to answer. When I was growing up I don’t really remember if I had great aspirations to be something particular. I guess I would say that I would have loved to have a degree in History. However, early on I realized that you have a hard time making a living with that kind of degree. That is why I have a BS in Nursing…which I am not doing now. I am still trying to decide what I want to be when I grow up. I think it is going to be photography.

4. If your house was on fire, what one item would you grab from the kitchen to save?
Well, if I had answered these questions yesterday I would have said my French Press and my coffee beans from Ethiopia. But yesterday the French Press cracked straight through, a tragedy of immense proportions as I am not able to go out and get a new one until Monday. To be honest I would grab the small measuring cups that used to be my Grandma Amslers. Those can’t be replaced. All the rest can be.

5.  Coke or Pepsi?
Oh that one is so easy. Coke. And NOT Diet Coke. Full, regular Coke. I allow myself one regular Coke a month as a treat. And it is delicious.

6. How many years have you been friends with the person you've known the longest?
Oh that would be Brenda Hook Morris and we have known each other a LOOOOOONG time. I think it is at least 46 years, maybe more. 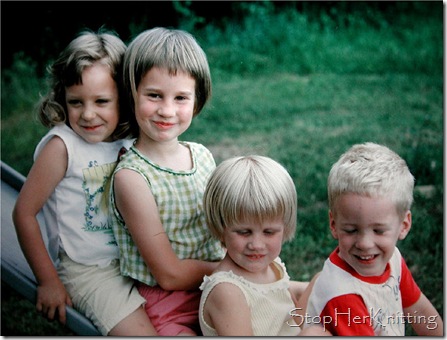 I am the one on the far left. Brenda is next to me.

7. What food dish do you consider the most daunting and have not yet gotten up the courage to attempt it yet?
Oh this is an easy one….puff pastry. Why that is so daunting to me I do not know but it just scares the weebie jeebies out of me. Yeast dough, no problem. Pie, no problem…usually. Complicated recipe, no problem. But puff pastry makes me want to go and hide somewhere until the threat is gone.

8. If you were an animal, what would you be?
Now this is a question worthy of Barbra Walters!! I would have to say a cat in a very pampered household. You can sleep when and where you want. People bow to you and give you food. And you can be as snooty as you want. Or as loving.

And now for the questions from Cindy at Letters From Midlife. Cindy is my bloggy friend. We understand each other. We are blog sisters separated at birth.

1. Who would you like to see in concert and have a backstage pass to meet?
Arthur Rubenstein and hopefully he would be playing Rachmaninoff’s Variations of a Theme of Paginini, the piece of music that makes my heart sing with joy.

2. What one skill would you like to possess that you can't already do?
I wish I had some mechanical skills, or at least more than I possess at the moment. I am “spacially” oriented, I can visualize how something is going to go together but there are a lot of things that I don’t know how to do. I should have watched Papa closer when I was younger rather than reading a book.

3. What fictional character (from books or movies) would you like to meet?
Philippa Talbot in In This House of Brede. It is one of my favorite books and I have no idea why but it is. Of course, I like just about everything that Rumer Godden has written.

4. Where would your dream home be located?
By the water. I remember, on a trip to Washington State many years ago, driving by a house that was located on the shore. It wasn’t a big house, it just looked happy and content. The sun was shining on it, the tide was coming in, the sea gulls were zooming all around, the light was soft. I don’t have a picture of it except in my memory but that memory is as fresh as yesterday.

5. If you could switch careers or start one for the first time, what would you like to do?
What I am going to be doing, I hope. Being a photographer. I am absolutely petrified. But I still want to do it. Some of you will understand me when I say that I have to take pictures.

6. If money, responsibility and fear weren't considerations, what one great adventurous thing would you attempt?
Hmmmmmmm. You know, HHBL and I have traveled a fair amount. I would just continue to do that. I would really like to go back to India and Africa for a longer time. And I really, really, really want to go back to Australia and New Zealand. I would really just travel with HHBL.

7. What Biblical event would you like to witness?
God’s still small voice.

Wow, I am beat after all that. And now here are my questions and the people I tag. Don’t get mad. It isn’t that difficult. Really.

1. What is your favorite childhood memory?
2. What music makes your heart sing? Why?
3. What place would you like to travel to the least (sorry, I have to be contrary)?
4. How do you relax? What hobby recharges you?
5. What do you want people to remember you by (I stole that one from Cindy)?
6. What do you like the most about blogging? What do you like the least?
7. Dogs or cats?

And I tag……………..
Marianne at Life With Riley
Kathy at Twist and Shout
Barbee Ann at Couch Potato Queen
Tamara at Watching the Grass Grow
Jess at Knit Wit Rosie (who will kill me for tagging her)
Whitestone at Wanna Walk Along