I am elbow deep in tomatoes. Swimming in them. Rolling long on a tomato tidal wave.

If there was a politician hanging around I could throw some at him or her and still have enough left over to do what I am doing.

Not that I would actually throw a tomato, rotten or otherwise, at a politician.

It would be a waste of a good tomato.

What am I doing?

I am making pizza sauce. 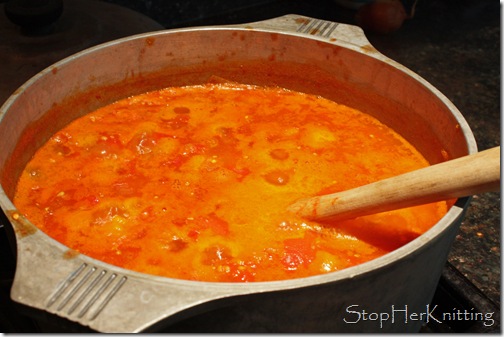 As I might have mentioned we love our pizza. I love my homemade pizza over anything that I can order in my little podunky town. In fact, we had pizza on Friday night, “Hawaiian Pizza”, which is just a fancy name for Canadian Bacon and pineapple along with the always necessary basil. And it was delicious. I made two pizza, HHBL and I ate most of them, and then Shoe Queen and I polished off the rest of it in the morning.

So, I have been debating what to do with the tomatoes that have started to come out of the garden. I love tomatoes but there are only so many that I can eat at any one time. HHBL isn’t overly fond of them in the raw and natural state. There really aren’t enough to do a big canning run…

But I have never actually made truly homemade pizza sauce before so this is a total experiment.
It may turn out to be a disaster of epic proportions. Sort of my own version of “Attack of the Killer Tomatoes”. I did a bit of internet searching for recipes and I have sort of a skeleton sketch of what I wanted to do and then it was elbow deep in tomatoes.

I know it is crazy but sometimes that is just how I cook. I know what I want to put in, I know the basic principles of what I want to do, I don’t have a recipe I just cook.

It drives LookLeap absolutely bonkers when she asks for a recipe and I have to sort of shrug the old shoulders and say, “Well, I can TELL you what I did and the ingredients that I used but……”. Of course, she is so organized that she has all her recipes on the computer and she can cross reference them. 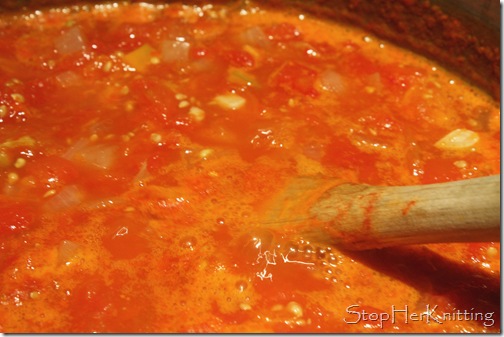 Before you tell me, yes I know there are seeds in there. I am a lazy, lazy girl and I figure that there is extra healthy goodness by leaving the seeds in. And I just didn’t want to take them out. I had already made a big enough mess with all the boiling water and peeling.

Beside all of this is going through the blender so those seeds will be history.

Can I say, just as an aside, how magical it always seems to dunk those tomatoes in boiling water for 45 seconds and then just have their skins peel right off. It is almost my favorite part of the whole process.

The clean up certainly isn’t.

So, I will tell you later if this is a success or epic failure. I didn’t take pictures of the process because cameras and tomato juice are not friends.

And how sad is that.

EDIT: So, when I said the tomato seeds would be history after a trip through the blender.....I was sadly ignorant. It isn't the first time I must say. But never fear, I know how to employ my strainer as a sieve. They are gone, the sauce is in the final stage of cooking after the addition of some red wine, dried basil and other things.

And it is REALLY good.
Posted by Debbie at 1:33 PM