WHAT Is That Smell???

Deb is finished with her errands, which included looking at yarn which always makes a day especially good…..

Pulling into her garage. Getting out of Coco. Walking towards the door….

It is awful. Horrible. Dead and decaying.

a long long time ago and in another house.

And it was as if I was right back in our last house. 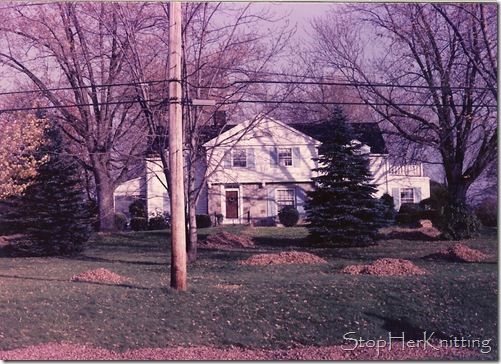 This house. This house which just proves that even though you have a really good inspection before purchasing a house there will ALWAYS be problems.

One of the things that this house had was a sump pump in the basement. Lots of houses have them and it isn’t a problem. But this one was an interesting set up. It had been put in by the owner that we purchased the house from and that should have clued us in that there would be issues. Frank styled himself a “do it yourself” guy. Oh he did things himself alright and he did them all wrong and we spent ten years redoing them when they failed. The water line. The siding. The roof. The heating.

So Deb, what does the Frankified sump pump have to do with dead and putrefying mouse? Well since you asked I will be glad to tell you. Where was I? Oh yes, the Frank installed sump pump. Now if you look at most sump pumps they are installed in the floor and are rather small and have a tight fitting top on them. The water goes it, the water goes out. Well not ours no siree. Ours was used only for the water from the washing machine and the utility sink. It was large, it had an ill fitting “lid” and it was ugly. I am not sure how deep it actually was but deep enough that I told the girls that they were never to go anywhere near it on pain of death, literally. I really didn’t give it much thought except to pray that the pump didn’t give out. Mr. Sumpy and I would have gone along just fine together if one day I hadn’t gone down to do a load of laundry and sensed a rift in the smell continuum.

Your house has a certain unique smell. Hopefully it is a good one, I think ours does but you would have to ask HHBL or the progeny about that. However, on this particular day there was just something “off” in the laundry room. Not enough to make you run screaming into the night but just something different. I figured that it was something wet that had been thrown down the laundry shoot and was at the bottom of the pile. I did laundry and didn’t think about it much anymore. I sort of got used to the smell, sort of a frog in the kettle kind of thing.

I went on with life. I cooked. I cleaned (maybe). I took the progeny different places.

And then I went downstairs a couple of days later to do some more laundry.

Good Lord in Heaven what is that smell!

It wasn’t good I can tell you that. And about this time I finally knew that it wasn’t anything in the laundry. Whatever it was it wasn’t alive I knew that at least. But where was it coming from? I won’t spend much time describing my laundry room in that house except to say that there were A LOT of places where something could have crawled off to meet it’s maker.

Holy Cow Andy the smell is coming from there!!! What could it be and how did it get down there.

Now, to see what was in the sump well you had to maneuver the top out of the way. You couldn’t move it all the way off unless you actually pulled all the wires for the sump so I wasn’t going to do that. Once the lid was out of the way you then had to lay prone on the floor and look in there with a flashlight. If you have seen “The Fellowship of the Ring” and the part where they are in Moria and Pippin knocks the suit of armor down the well then you will have a good idea. I lay down, trying not to gag because the smell is DEFINITELY coming from there. I switch on the flashlight and gingerly look down into the sump well,.

Hmmmmmmmmm. OK. There is the usual amount of water. There is the sump pump and its various pipes and wires. There is a dead and decaying mouse. There is some lint from the load of laundry.

Back up there Deb!

OOOOOOOOOO, now I see the problem. There is a dead and decaying mouse in the sump well. And when I say decaying I mean that he was almost at the point where he would become one with the water. But he wasn’t quite there yet and I couldn’t leave him there because we wouldn’t be able to use the basement so I had to get him out. And there in lay the problem. How to get the squishy, smelly, slimy, slippery dead mouse out.

I know! The ladle that I use for soup! I will just run it through the dishwasher about a million times after I am done scooping out Mr. Squishy. Only it wasn’t long enough for me to reach down and scoop up the mouse. Rats! I am intelligent. I can McGyver this!

What to do, what to do. Heeeeeeeeey. I know what to do. I take a long wooden dowel, a plastic cup and duct tape. Duct Tape, anything can be accomplished with duct tape. I tape the cup to the dowel and reach in to do the job. Only it isn’t as easy as I had imagined. Because Mr. Squishy didn’t want to be ladled up. In fact, he executed his own evasive maneuver by coming apart at the seams so to speak. So instead of just ladling him up in one piece I had to do multiple scoops, gagging the whole way and yelling at the progeny not to come in here!

And to add insult to an already injurious situation I hadn’t thought through very well what I was going to put him in once I had extricated him from the sump.

Shoot, shoot, shoot the bag is leaking. Grab another plastic bag to double bag. Maybe triple bagging would be better. And NOW I have mouse juice on my ratting laundry room carpeting and I am going to just have to scrub that as well. But I finally got the job done, transported him all the way to the back of the property and tossed him, plastic shopping bags and all, into the woods. So sue me Al Gore. No way I was putting that into the garbage cans.

I am sure about this time you are wondering what the heck this has to do with the smell in my garage. Well I have to tell you a little something about Decon Mouse be Gone in order for you to understand. We had mice at the other house. It was in the woods and mice and woods love each other. When you put out Decon the mice belly up to the buffet with gusto. One of the things that happens as the Decon works it’s magic is that the mice become VERY thirsty. And evidently this mouse took a header into the sump well to try to slack his little mousey thirst.

I still live in the woods although in a different house. I still employ Decon. The mice LOVE the stuff and I am glad to provide it for them. And since I use Decon that means that there might be thirsty mice around looking for water. And when I lifted off the grate on the drain in the garage, there down in the very bottom I can see what I believe is the remains of a mouse. It is fairly dry in the drain and this time I am not sticking anything down there to try and pry him out. I just dumped a box of Baking Soda down that drain and I am hoping for the best.