We Are The Champions

Queen comes on singing “We Are the Champions” (if I knew how to embed it I would).

I might have mentioned a time or two that HHBL plays baseball in the summer months. And in the fall months too but that is a different story.

THEY ARE THE CHAMPIONS OF THE MASTERS DIVISION!

Of course I went to the double header. You betcha baby! 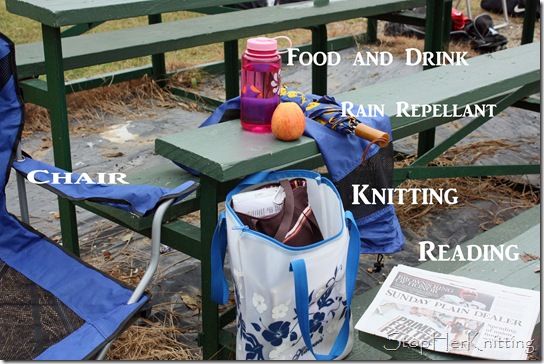 I went prepared for the day. The chair is essential for my patookis. Obviously I need food and drink. It was a cloudy day so the umbrella was just in case. Of course I would bring knitting. And the paper was to entertain me with the latest in our ongoing political scandals here in the Frozen Northeast Ohio. It looked like I was moving in as I set up shop.

I am a boy scout in female form. 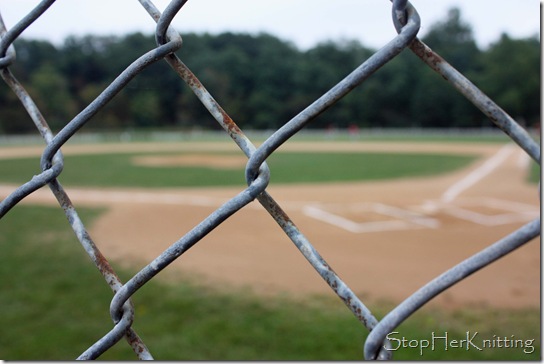 The field of battle. Can you hear the roar of the crowd?

Maybe not. But there were a few fans. 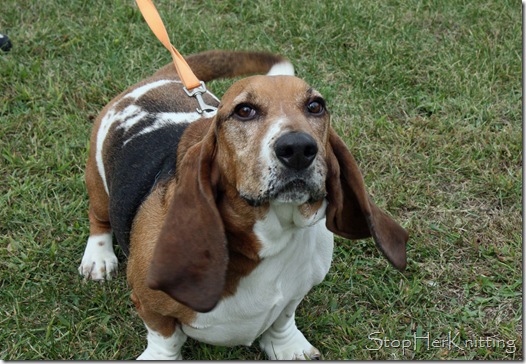 Elvis was in the house to cheer on the team. 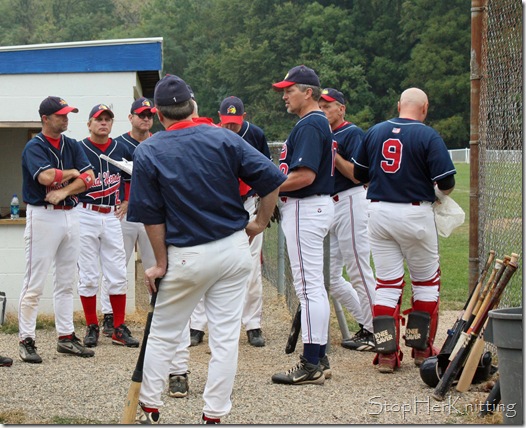 Last minute instructions from the coach on how to beat the Bucs into dust and send them screaming back to Pennsylvania.

OK, maybe they were just talking about the line up. 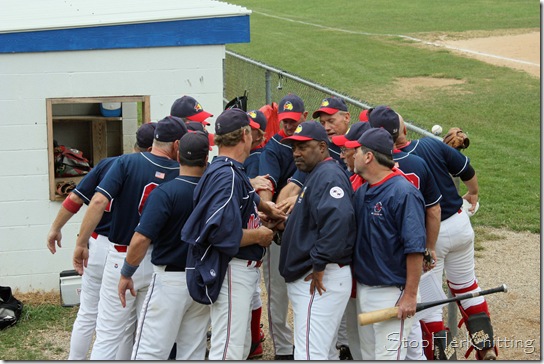 All for one and one for all!

OK, that isn’t what they say. But I can’t really tell you what they say, it would take too long. And some people might not understand and take offense. But they say it every time before every game.

You will just have to be left wondering.

A bit of mystery is always good for you. 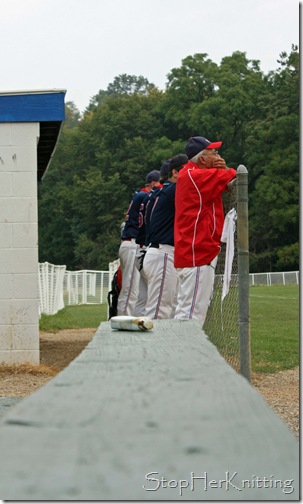 Cheering on the team.

That is what I like the most about the boys who play for the Mudhens. They just enjoy playing the game. They compete 110% but they don’t take themselves too seriously. There is a ton of laughter and ribbing and encouragement. 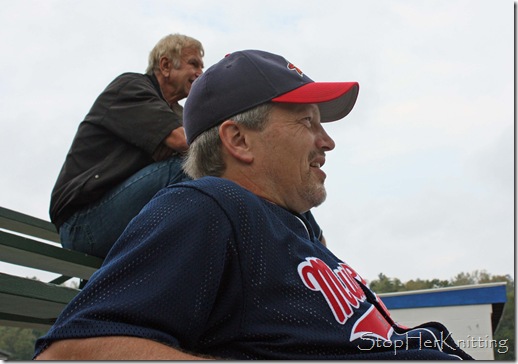 OOOOOOOO, my own personal baseball hunk. I like him almost as much in his baseball uniform as I like him in a suit.

Uhmmmmmm. I think I had better stop there.

Back to the game. 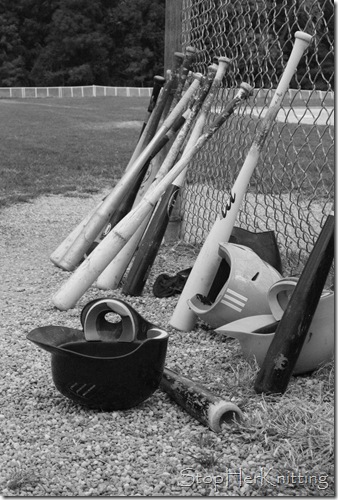 The tools of the baseball trade. The smell of pine tar. The ping of the bat. The slap of leather as the ball hits the glove. The smell of the dust as it blows up into my eyes and I can’t see what is happening on the field….. 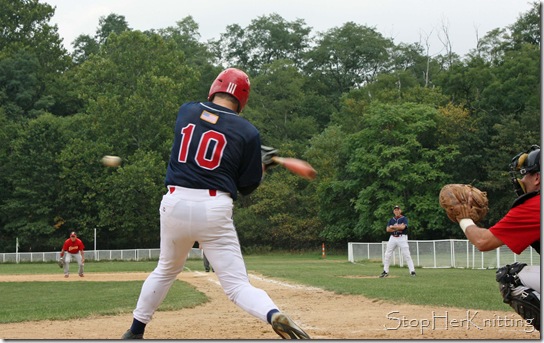 And now I would like to brag on HHBL a bit. Power hitter. Yes. Stellar left fielder. Yes. He is what I might call an “inhibitor” when he is in left. He has a gun for an arm and can throw from left to home, beating the runner. That also means that he can throw, with amazing accuracy to any other part of the field. The other team doesn’t send runners as often as they might when HHBL is playing. In fact, with HHBL, Mark, Steve and Karl in the outfield, the Mudhens outfielders are the best in the league. 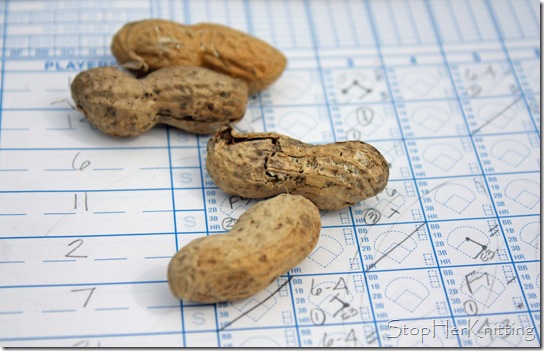 Of course you have to have peanuts when you are watching baseball. Jean brings them which is good because if I had to be the one to buy them there might not be any left by the time I got to the game. 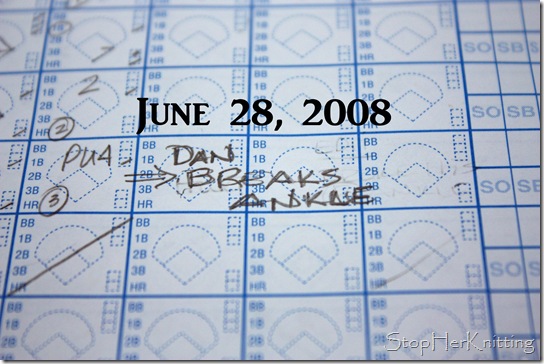 I was worried for a bit because I didn’t think I was going to have enough pages left in my scoring book. But I found some that were blank and hiding. But I am finally finished with the book. But the question is, what to do with it. One side of my brain says to save it for things like the above notation that I made at a particular game.
But I am not sure that I really need a piece of paper to remember that particular incident and it’s aftermath. 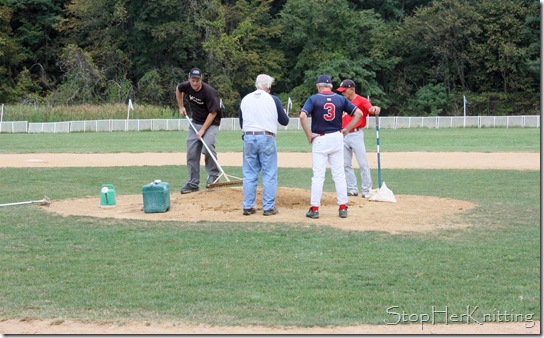 The Mudhens won the first game 8-7. It was a squeaker that almost went the other way. The Bucs are a hard playing team that can score and make plays. There was some mound maintenance that needed to be done between games. At one point it looked like they were excavating but things finally got put back together and 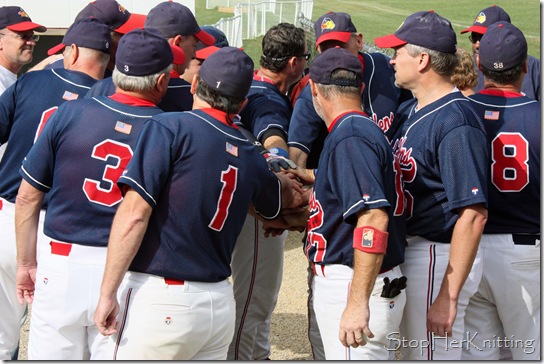 it was time to do their little ritual.

Still not telling you what they say. Sorry.

The game was hard fought. 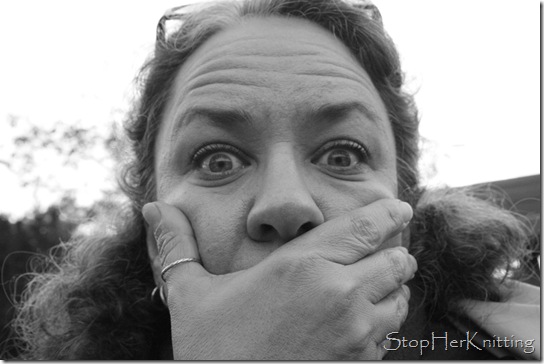 The tension was horrific. We were tapping our feet and eating peanuts and jumping up and sitting down and yelling encouragement.

And I have to say that all that tension just makes me have to go to the bathroom. And that is a problem because the only place to take care of business is the one lonely Port-o-potty. Why can’t they make those things just a bit bigger. It would make things just a bit better, less up close and personal if you know what I mean. It isn’t the worst place that I have ever encountered. Remember these? But it doesn’t make the whole baseball experience the best. Thank goodness there was toilet paper.

And I didn’t take a picture of it. Aren’t you proud of me?

And finally, after almost 6 hours of baseball….. 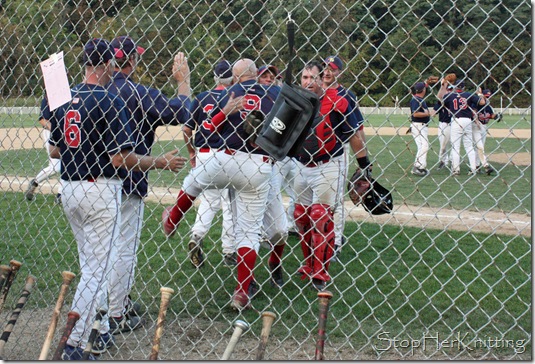 The final out was thrown and the Mudhens beat the Bucs 11-4 to take the Masters Division Championship for the first time. Much rejoicing ensued. 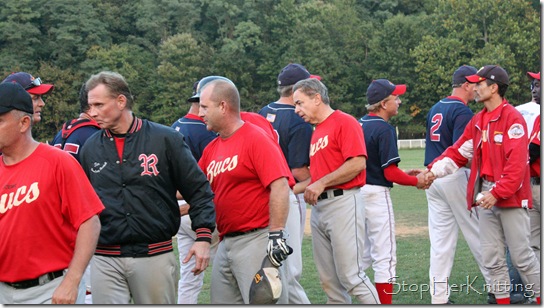 I love the part where they all line up and shake hands. 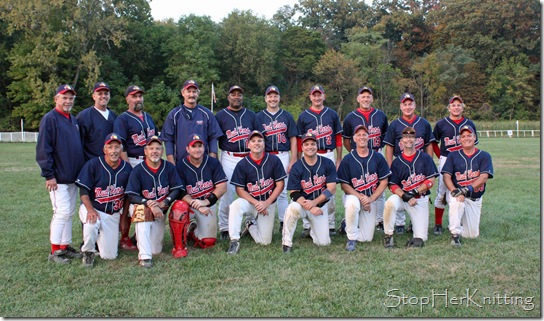 The obligatory team picture. A nice looking group of guys.

And then the party began. 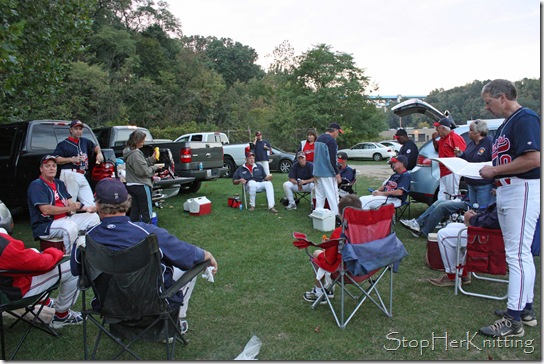 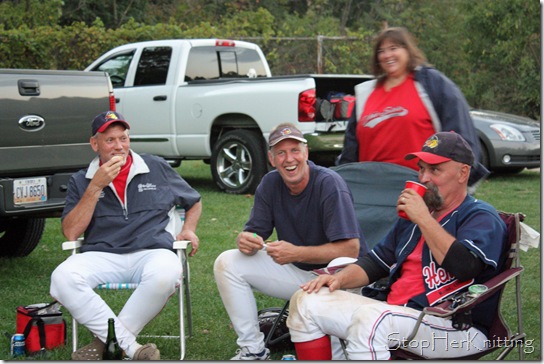 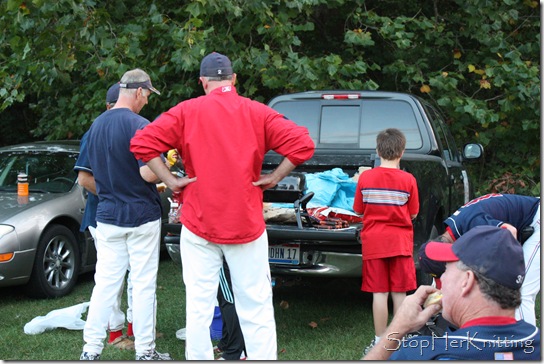 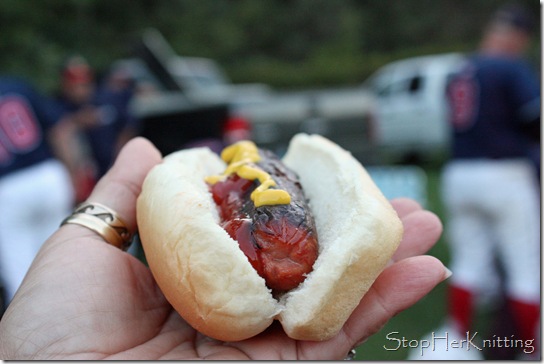 I so rarely have a hot dog. I usually run the other way. But sometimes you just have to succumb to the siren song of the dog. And these were totally yummy. 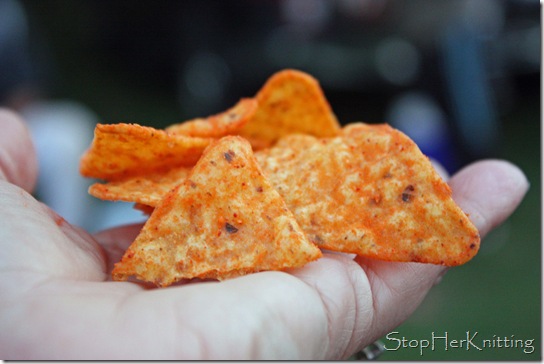 I also indulged in some Doritos. Oh these are so, so good. I was already sliding down the slippery slope of bad eating, I might as well jump into the deep end of the pool. 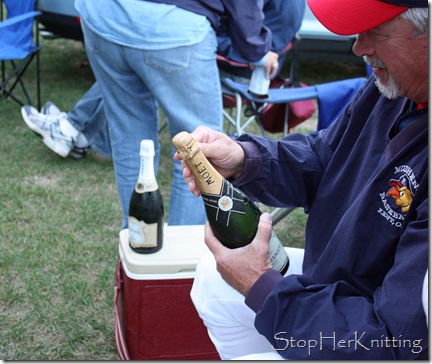 Of course we needed some champagne. Don did an expert job of opening. 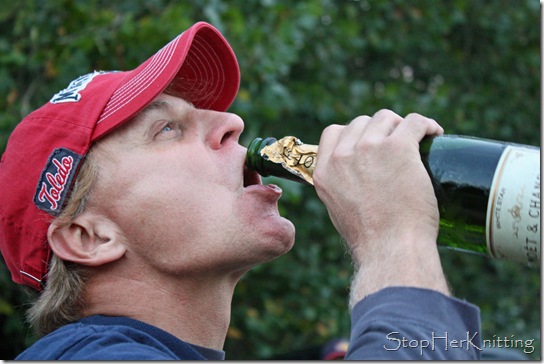 Mark demonstrated the correct way to share a bottle when no cups are readily available. Thanks Mark for the lesson.

And so, we ate, we celebrated, we enjoyed the good memories from a great year.

I can hardly wait for November and the tournament in Florida.
Posted by Debbie at 2:15 PM