So, part of the reason that we took that little trip to Africa was to see The Engage One (hence forth to be known as TEO). She is studying for a semester at this place... 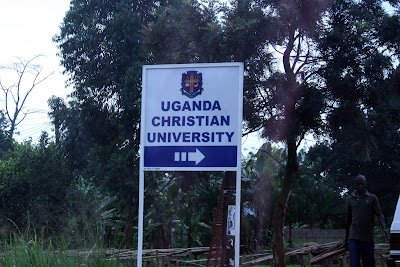 Uganda Chirstian University is located in Mokono, Uganda about 45 minutes outside of Kampala. We flew into Entebbe on a Saturday evening, stayed overnight near the airport and then had a driver who took us into Mokono on a Sunday morning. It may have been Sunday but that doesn't mean that life stops of slows down on the roadways of Uganda let me tell you. I was obsessed with taking pictures of what people carry on their heads........but that is for another post I am thinking.

At any rate, I suppose that I ought to start by saying we are so excited that TEO chose to do this for a semester. I was asked a while ago how I felt about her choice. My answer, which I think HHBL would echo, is that we have raised all the progeny to be independent women, that they are smart and intelligent and make good decisions (well all except for that shaving the head incident several years ago). Now is the time for something like this, especially since she is getting married in May. Yes we were nervous but she is ultimately the Lord's child and we trust that He is protecting her and growing her. She is 21 years old and we weren't going to tell her that she couldn't go. She would have laughed at us if we did, and rightly so.

So, lets walk through our day with TEO. Do you have a cup of tea and some time? I hope so cuz I have pictures! 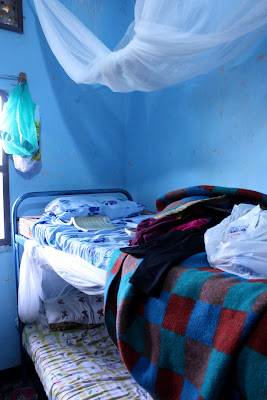 TEO's accomodations are all that she needs, and just barely that. Actually, she has adapted well to the living spaces. She and her roomie share a room that has enough space for a bunk bed (with mosquito net), one desk and chair, a small amount of floor space and two built in storage areas. That is it. I thought Cartoon Girls dorm room was small but it was graciously spaced compared to this place. There is a communal bathroom at the end of the hall with a place to wash clothes (in a bucket) and a cold water shower. A GREAT way to start the day. Actually, the temperature is very warm during the day so a cold shower feels pretty good.....or so she tells me anyway. 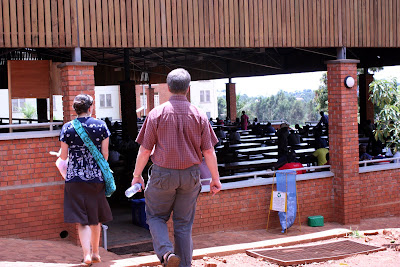 Of course we had to check out where she has her meals, because you know I am all about the food. I can't list all the things that she has to eat but I can tell you that it is HEAVY on the carbs. They often (read every day) have potatoes, rice, beans, "g-nut" sauce (that is peanuts to us), matoka (cooking bananas cooked and mashed) and other things. The kids tend to also go off campus to get food from the stands that line the road. I can tell you there were some tempting things out there that we sampled - I was especially partial to the chappati. In fact I will be making that at home soon. There is nothing like a flat, pancake like thing made of just flour, water, salt, sugar and sometimes a little oil rolled out and fried. I am telling you these are DELICIOUS! 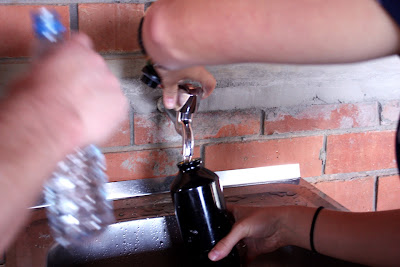 We were able to go to church with TEO at the church there on campus. I have no pictures of that because TEO told me that I couldn't take any pictures. I complied but reluctantly. It was really great to be able to worship with other believers. We are always blessed by the experience and their praise band and "mixed choir" were pretty darn good.

After church we were able to have visit and meal with TEO's host family, whom she stayed with when she first came to UCU. It is just a short walk but a totally different world. We stood out like believe me, and it was the first time that I heard the cry "muzungu" which means white person. It wasn't the last time, and lest you think it is an epithet it isn't. 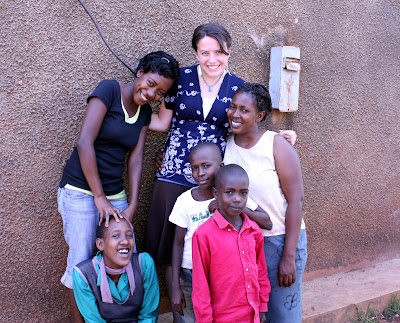 I should explain that the only boy in the home at the moment is Andrew, who has on the red shirt. All Ugandan children who are in school regularly have their heads shaved hence Patience (white shirt) and Vivian (blue shirt) also have peachfuzz.

TEO's host family lives in a three room home, without electricity or running water. The front room is where they live, the back two rooms are bedrooms that are occupied by 5-7 people, depending on whether the older boys are home from school. 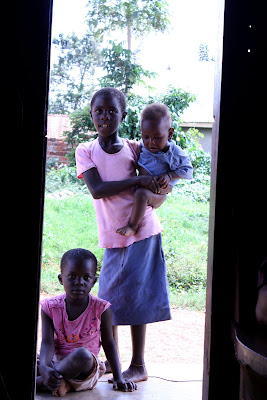 Where ever you go, if you are a muzungu and are carrying a big honkin' camera you attract children. First there will be one, then the next time you look there might be two and then a whole crowd. These lovies just stood there and smiled until shooed away. Just as an aside, the week in Africa I saw more little babies without benefit of pants than I have ever before seen. They were darling and I would have taken pictures but then you would think I was wierder than you already thik. Believe me, when you see the post on "African toilets I have known" my wierdness will be confirmed. 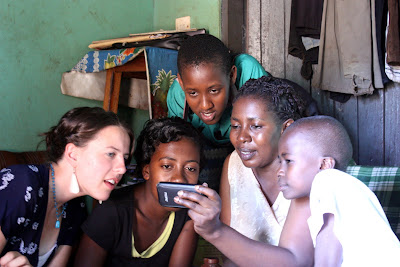 Before we left for Africa HHBL had made sure to put on his iphone a bunch of homevideos of TEO at various ages. She and her host family spent time just yucking it up looking at those videos. An especial favorite is TEO, at about age 9, strenuously working out to the "Barbie Workout Video". I still crack up watching that one. 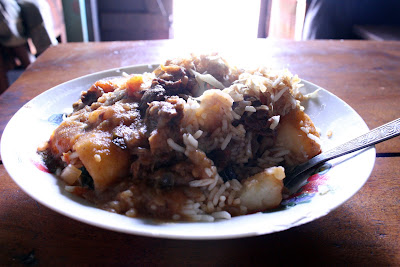 Lunch was a typical meal of rice, potatoes, beans, and cabbage. There was also some meat which I believe was pork. The pork was not typical, they usually only have meat once a week or so. We felt very honored that they went to the expense of serving us meat, and it is a great expense for them. Vivian dished me out a gigantic portion, about twice as much as I would have given myself. However, I valiantly finished 95% of it because to do otherwise would have been very rude and wasteful. I wish I could say that I didn't eat anything else that day....but I would be lying. I had a chippati later on. Yum! 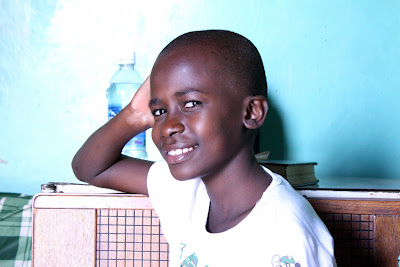 This is Patience, TEO's youngest "sister". I just wanted to take her home with me! Funny, sharp as a tack, smart. What a joy to get to meet her. 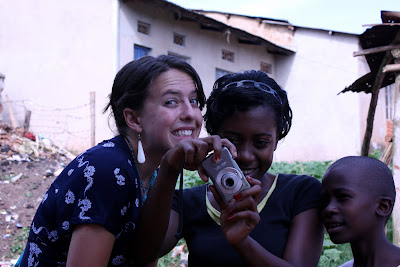 We spent time taking silly pictures, or rather Irene was taking silly pictures and Patience was supervising. Then it was time to tour the campus, dodge the chickens that wander around (who do they belong to I want to know), get something to drink and sit and chat for a while. We won't see TEO again until December so we wanted to spend some time with her. 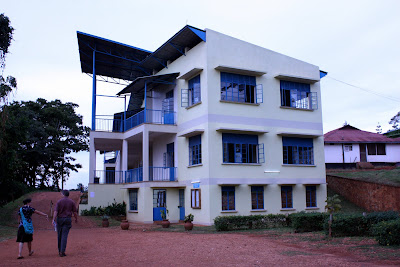 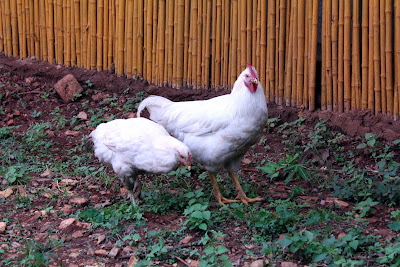 After dark we ventured out onto the main road to get something to eat, AGAIN, before our driver arrived. Um, it was an experience walking along a road with no street lights, along with bunches of other people, and hoping that one of those crazy motorcycle taxis (called bota botas) didn't take me out. I had to control my fear with the consumption of chippatis. It was a close call but I was eventually calmed sufficiently to walk back to the university.

Our driver arrived around 9p, we said goodbye to TEO and wended our way back to Entebbe