Sometimes You Really Did Want That

Here at Chez Knit I am gearing up for the launch of 100 Days of Clean Out.

That sounds like there will be massive press coverage and that Elizabeth Vargas will be calling to talk about a segment on 20/20. Somehow I seriously doubt that one. And I will be glad if someone, anyone, arrives there and leaves a comment. I am pitiful.

Yesterday I spent a good portion of several hours cleaning out some files. Looking through old articles. Throwing out recipes from the 1970’s that I KNOW I will never make. Scanning some things so that I have digital copy and then throwing the paper away.

I was a file purging machine.

And somewhere in the back of my little knitty brain there was a voice. A small voice. A plaintive voice that tried to make itself heard over the din of

That little voice said……I think you are going to want to keep that newspaper article.

Into the black plastic garbage bag it went. And then I dumped two other garbage cans worth of paper etc. on top of it. And I had fully intended to take it out to the big garbage can before the pick up came but never got around to it.

And so, of course, this afternoon I was reading some blog posts and one of them had something to do with the EXACT nature of that article: The liturgy of the hours.

Hey! Wasn’t that the same subject as that newspaper article that you so carelessly threw away despite the fact that your little inner voice was telling you not to. 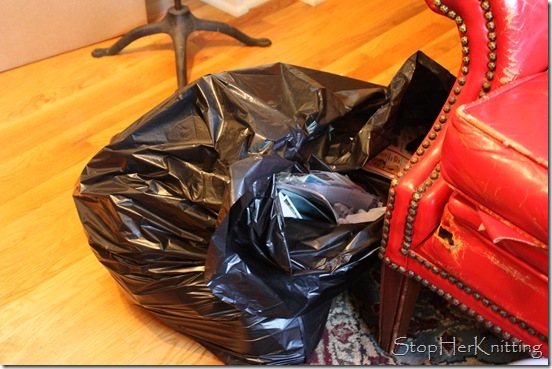 I had to go back through the bulging garbage bag. The bag that just sat there malevolently, pulsing with garbagy life. 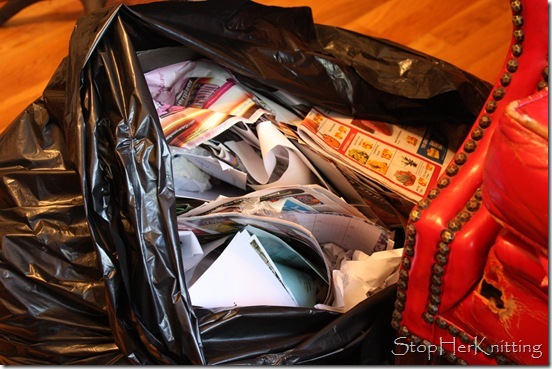 Oh there was lots of paper.

And pieces of gum stuck to paper.

And an old apple core or two that I might have pitched in my office garbage can.

And a candy wrapper. But we won’t talk about that.

Discarded coupons, globs of dog hair, globs of my hair (I shed like a dog), an old pen or two. 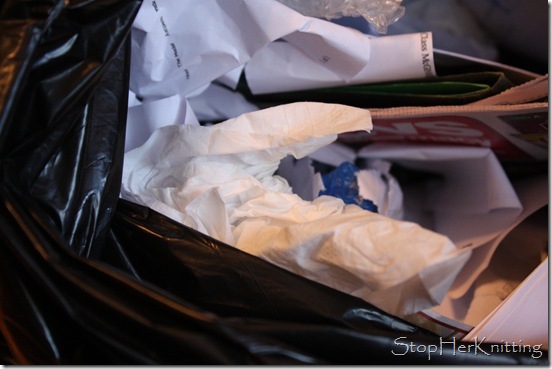 And a great deal of used Kleenex. It only makes it marginally better to know that the used Kleenex was mine.

And there, at the very bottom of the bag, hiding under an old magazine was the article. It has now been safely retrieved and re-filed.

So that the next time I clean out files I can throw it away.

It is the circle of life you know. Or at least my version of it.

Email ThisBlogThis!Share to TwitterShare to FacebookShare to Pinterest
Labels: Clean Out