Ah Fall, time of year when the school year starts and high school football gears up.

Yes, I know that it isn't actually Fall yet but that doesn't mean that we don't have high school football. We don't have any progeny in high school anymore but still we are drawn into the Varsity Football vortex, swirling, swirling.... sorry, I got carried away there for a moment.

So, one of the guys that HHBL plays baseball with in the summer is a varsity football coach at one of our local high schools. We go to the yearly game where Tom's team plays our town's high school. We go to support Tom, and I am sorry to say, every year he needs it.

You see, our town's high school varsity football team were the state champs last year....and Tom's team were not. Not by a long shot I am afraid. But we go because we want to support Tom.

I have to apologize in advance for the quality of the pictures. I made the decision not to bring the big camera and just had my small Canon tucked in my purse. I didn't think that I would be taking pictures. I should have known better. 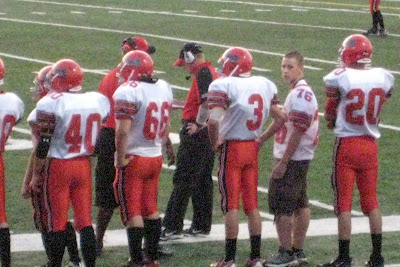 That's Tom with the headphones on. He is planning his winning strategy. At least we hope he is. Either that or he is looking rather dejected. Of course, it was 10 minutes into the first quarter and the score was already 14-0 and Tom's team was not winning. But, they were definitely not giving up that is for sure. 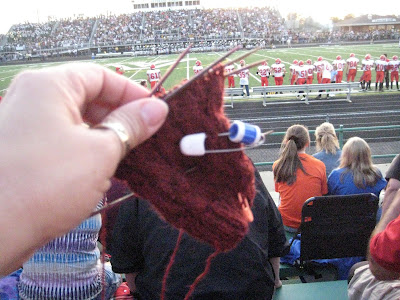 Of course you can knit socks in the stands. Come on! I can knit socks anywhere believe me. I worked on socks during Cartoon Girl's college graduation. It was either that or give in to the snoring and drooling out of the corner of my mouth that the commencement speaker was causing. These particular socks are being made for someone else....who requested them of me. They aren't really UT orange (I just couldn't do it!) but they are a nice Fall color and they are really yummy. And they are almost done. 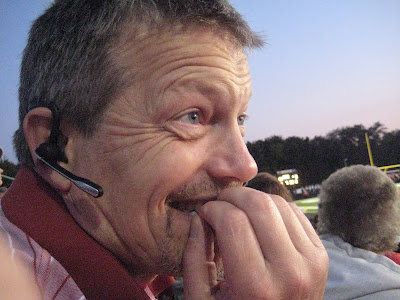 HHBL is on pins and needles as the ball moves down the field. Oh what will happen?? The suspense is building to a fever pitch. 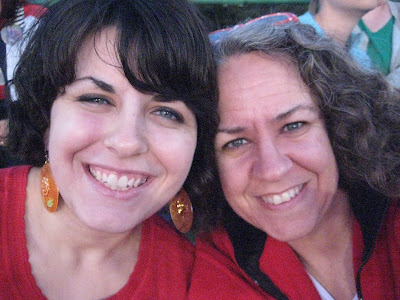 Cartoon Girl and I enjoying the exciting game. 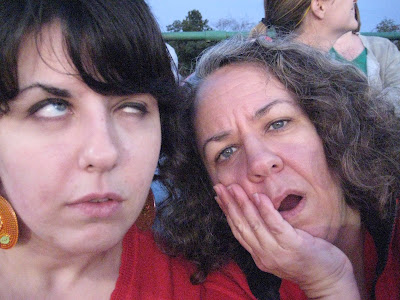 This picture is probably more reflective of what was actually happening on the field of battle. Taken close to half-time (thank the good Lord) when the score stood at 41-7 and Tom's team was definitely not winning.

Just as an aside....who went and grafted my mother's hands onto my wrists. Whoever did that I am wantin' to have a little chat with you. 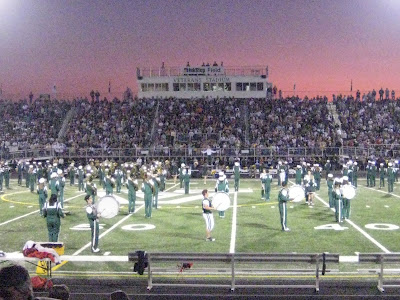 But then it was time for my favorite part of the whole process.....the Marching Band!!! Oh, I love marching bands I really do. It may be because I was in the marching band in high school. There is nothing quite like being encased in a wool marching band suit on a warm, humid Friday night. A wool suit that is not new, that has been worn by countless previous band members and may not have been cleaned to often.

Well, enough of that memory lane I am thinking. 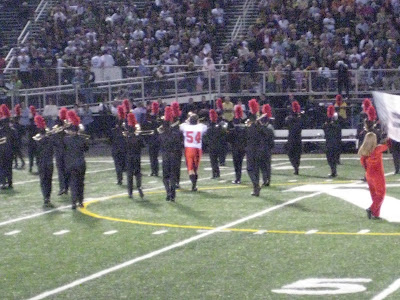 Remember, I live in semi-rural America so people sometime have to do double duty, especially at Tom's school. That is why there was at least one football player who was also playing in the marching band. His shiny band shoes just didn't go with his outfit I have to say. And their band itself was significantly smaller. But I have to say their sound was actually better than the bigger band. 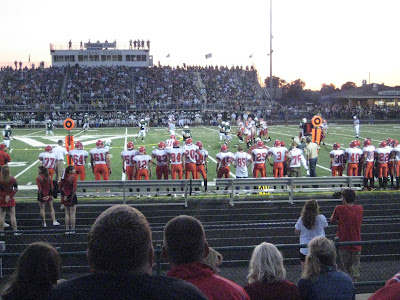 Yes, it was a beautiful night for football.....and therefore we left after half-time. We are die hard fans I tell you!! Die hard........ Hey, we stayed long enough to cheer Tom on as his team re-took the field. And the final score wasn't as bad as you might be thinking...

But Tom's team didn't win. But there is still next year!
Posted by Debbie at 4:41 AM