Well, can you guess what we were doing this past weekend? Yes, we were celebrating the graduation of TEO and TASiL from the college of their choice.

That means that there are now two down and one to go in college. I can hear the angels singing faintly in the far off distance.

you will just have to put on your big girl panties and deal with it.

Four years ago we toted TEO out to this place 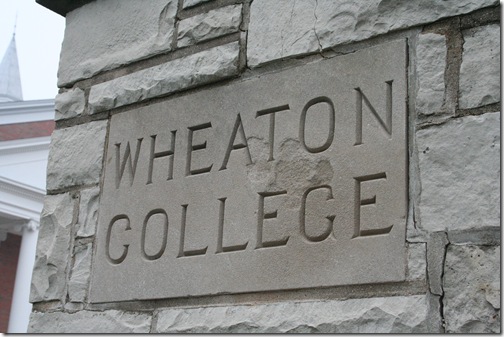 Wheaton College is a place I know fairly well. I grew up in the town in which it resides. I did not go here because, well, I was a stubborn person and wanted to go someplace else. But that is another story.

Just not too much fun. All play and no work make for unhappy parental units. That was not something that we had to deal with thankfully.

So, after four years of earnest study and play. Of time spent studying overseas, for both TEO and TASiL (more on that later). It was time to matriculate. Let us stroll through the day shall we. It happened to be Mother’s Day which seemed a fitting day for a graduation. 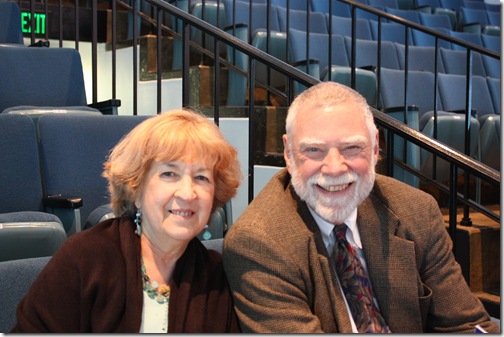 First of all I have to show you a picture of my parental units, Mimi and Papa. They live in the town where Wheaton College is located. They have opened their home repeatedly to groups of college students both before TEO started there and then during the four years that she has been studying. Mimi has cooked untold numbers of meals, baked cookies, taken people shopping. LOTS of things. Papa has transported granddaughters to and from airports. He has helped to move furniture and boxes. He has been a rock. We, the parents who are out of town, have been able to sleep a bit better because we knew that Mimi and Papa were there, boots on the ground, if there was something that needed immediate attention.

Thank you Mom and Dad. You can’t know how much it has helped.

We had a lovely time at Baccalaureate in the morning. We got there early but not too early so we had great seats. I know it may surprise you but I have this need, this compulsion, nay what some would say this obsession with being someplace first and getting good seats and…

OK, and just beating everyone else to the punch. I want to be A1 for boarding the next time I fly Southwest.

So, in the afternoon we knew that the Graduation ceremony started at 3p. We figured that we would get there around 2p and we would be golden. Some in the group (who will not be named) rolled their eyes at having to get there an hour early as that surely would be WAY too early and we would just sit there. But those with the “I must be early” genes in full on mode prevailed. We parked, we picked up our tickets from TEO, we strolled over to Edmond, we…….

HEY! Why are all those people there in the courtyard in front of Edmond? It is an hour before the ceremony starts and we are supposed to be the only people crazy enough to come that early. Boy there sure are a lot of people.

So we stroll up and stroll along thinking that people are just milling around and waiting for the doors to open at which time they will rush forward like people at a Black Sabbath concert….only I doubt most of these people would be at a Black Sabbath concert. We stroll along until it dawns on us that all these people aren’t just milling around…they are in line….in a long line….in fact there are several long lines. And we are at the end of it.

I will say that we eventually found TASiL’s parents, who were in further up in another line and so we strolled over to where they were. HEY, we were going to sit with them anyways so we weren’t line cutting. For the love of Pete this isn’t Cedar Point. At the exact dot of 2:15p the doors opened and we processed in orderly fashion into the chapel. We managed to find seats down close to the front on the side but quickly realized that they weren’t going to be great for seeing TEO so we quickly made the decision to go up to the balcony, where we scored primo seats in the front row. I love it when those things work out. 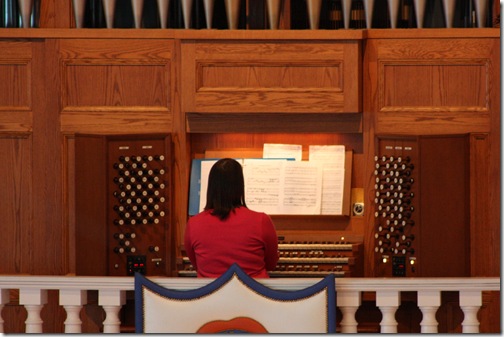 There was organ music to soothe us. This is actually the smaller of the two organs. 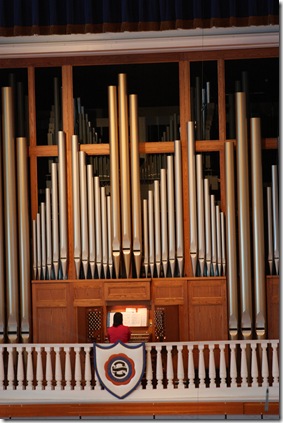 This is what things looked like without a telephoto lens. And these aren’t even all the pipes. On more than one occasion, when I was younger and attending some concert here, I was bored silly and counted all those pipes so I know that there are A LOT of them. 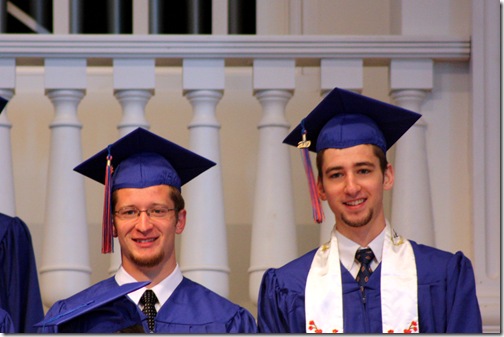 This is TASiL and his twin brother, The Future Doctor, or as he will be known from now on (because I must give everyone a name) TFD. 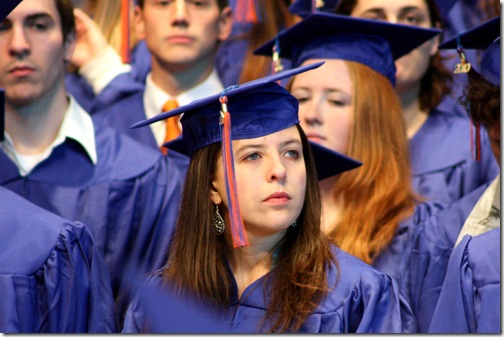 Look! There’s TEO looking all over for us. We didn’t sit where she thought we would. Sorry. We did everything we could to get her attention, like waving our hands energetically in the air much to the consternation of the people behind us. I resisted the urge to stand up and yell. I do have some dignity, not much but some. 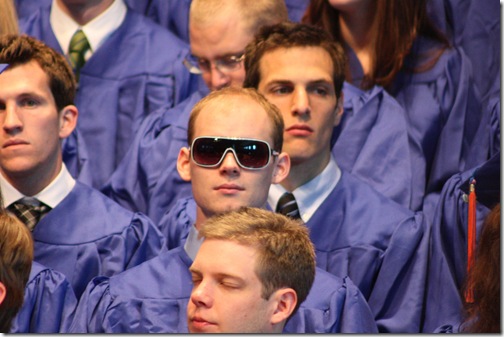 All I can say is that there is one in every crowd. 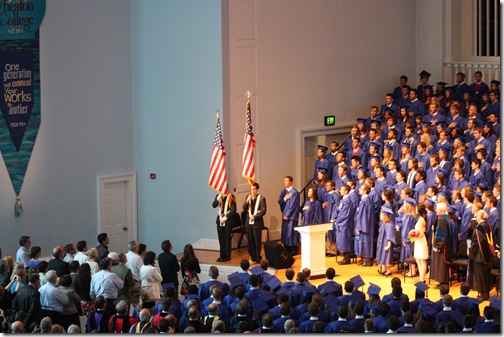 We started out by singing the National Anthem and it was awesome. 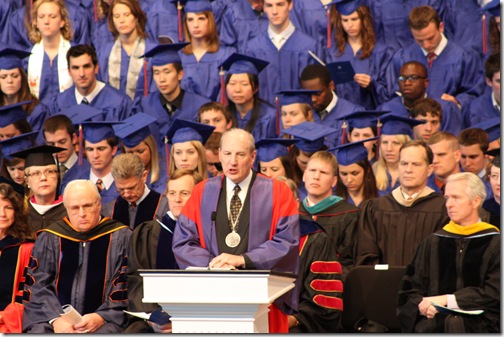 This is, perhaps, one of the most loved men on campus. Retiring President Dr. Duane Litfin is one of the nicest, kindest, smartest men that you will ever meet and the students love him. The man has a doctorate in Rhetoric so no question seems to phase him. I could listen to him speak all day long. 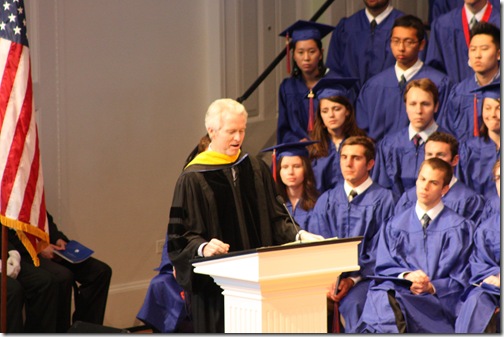 You always want a Commencement Speaker who is witty, articulate and has something to say that you can take “nuggets of wisdom” from. John Ortberg did not disappoint. I wish that I had a copy of his speech as it was wonderful.

And then it was only to the awarding of diplomas, which was done at lightening speed, which we parents and other participants were very grateful for. There was no monkey business on the stage like this craziness that we had to sit through last year…. 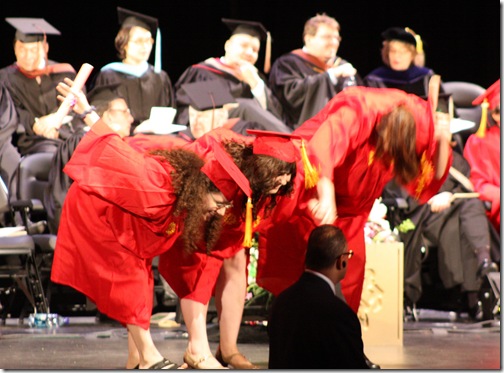 Only decorum and speed as people progressed across the stage. OK, OK, there was some yelling and encouragement from the people who had paid money to see their younglings graduate from this institution. You just can’t keep parents quiet can you. 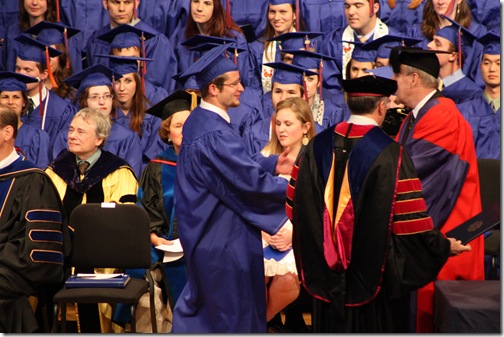 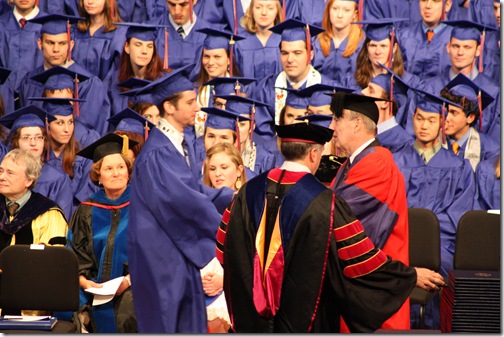 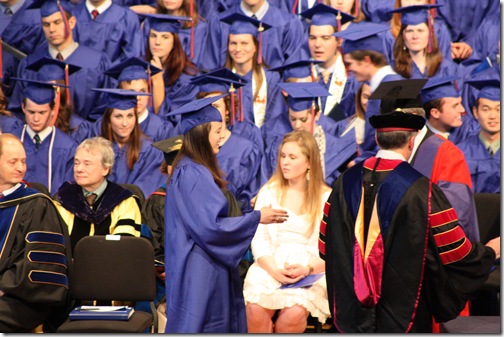 And then, after the commissioning of 8 Second Lieutenants from ROTC and other awards it was out the door to greet our new graduates. 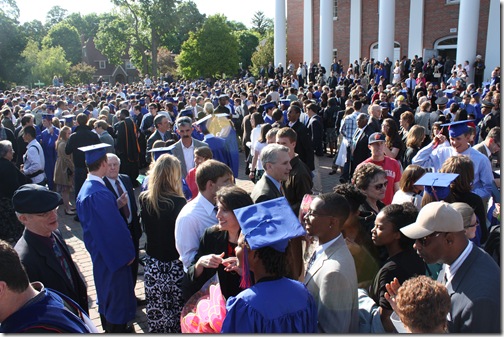 There were A LOT of other people there. This is only a small portion. And all those graduates look very similar with the blue caps and gowns. It took us 20 minutes to find them but we managed it. 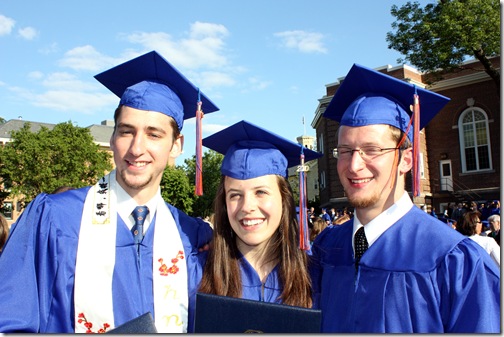 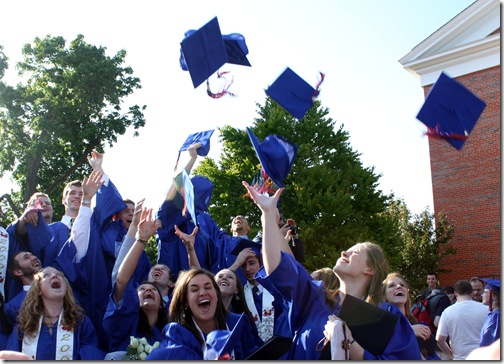 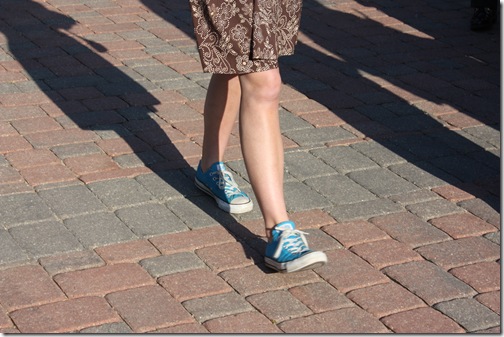 Sorry, I was momentarily distracted by this girls shoes. I want Converse that are this color. 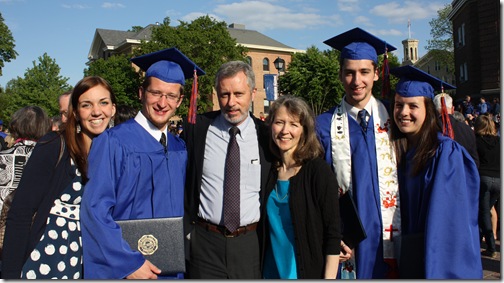 TFD, TASiL and their family. The lovely girl on the left is TFD’s girlfriend, Rachel, who surprised him by coming for the graduation. Their parents are medical missionaries in Pakistan and let me tell you they are so cool. Nancy is calm and sweet. Luke has a droll sense of humor that catches you off guard. They are smart. They make me look like a slacker, and a sarcastic one at that. 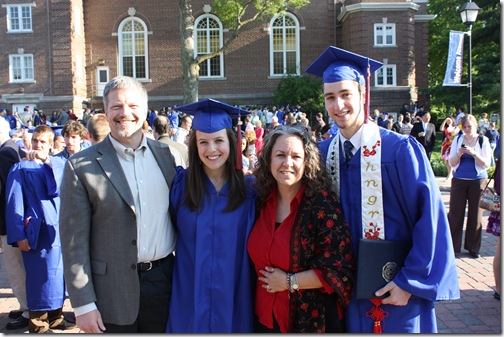 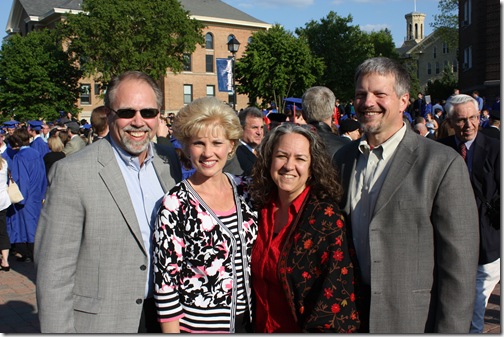 See, I told you that you would see pictures of people that you had never seen before. You just never know who you are going to see at a graduation. The lovely lady that is standing next to me is my LONG time friend Sharon and her husband Mark, who I have also known for many years. Hi Sharon!! We have known each other a freakishly long time since grade school. I have been searching all over for a picture I know exists of us in these pink velvet dresses. I can’t find it……but I will. Mark and Sharon also had a youngling graduating. Can I just say that Sharon has not changed a bit since high school. Me, well I have just gotten nuttier. That just isn’t fair really but I am dealing with it.

See Sharon, I told you that you would be on the blog.

And so, we are home for a time…..resting up for the OTHER BIG EVENT that is coming upon us with lightening speed.

I really need a nap.