I Killed the Venison Roast

I must apologize, right off the bat,to Pilot Man.

There, I have said it. It was painful but I did it.

You see, Pilot Man is my source for venison. My deer dealer as it were. My Bambi broker.

I don’t hunt. I do think it would be rather fun to learn but at the moment that isn’t on my horizon. I am not sure that I would be allowed to play with guns but that is not the point of this post.

Do you have a point Debbie?

Well, yes, I do if you would just hold your horses and let me get to it.

Pilot Man keeps us supplied with Bambi Summer Sausage and Deer sticks (sort of like Slim Jims if you know what those are). And also, occasionally, we get things like venison Italian sausage or venison tenderloin or venison roast. I had several roasts in the freezer just waiting to be cooked to perfection. So yesterday I pulled out a venison flat roast.

Hmmmmmm, how do I cook this I wondered. The best place to find that kind of information is the internet so away I went to Google, or in the this case Swagbucks “cooking venison roast”. There are a bazillion recipes out there, it is just a matter of finding the right one. I also looked at All Recipes which is sort of my go to place for ideas. Found what looked like a good recipe. It had apple juice and soy sauce in it, the meat was slow cooked, the roast was about the right size. Yes, this looks right. You were supposed to do the roast in the slow cooker (when did crock pots start to be called “slow cookers”?) but I decided to just put it in the oven on a low temp. I am not sure if that had anything to do with the eventual outcome……..

Got everything all ready. Stuck it in the oven on  a low temp. The recipe said to let it cook for 6 hours. Now, I will admit that for just a nano second I thought that might be too long. Venison is a very lean meat and I hadn’t added any extra fat to the recipe, like draping the whole roast with bacon or something. I wondered if that would dry it out. But, I looked at all the comments on the recipe and everyone raved about it so I went ahead.

Always go with your gut instinct.

I went off to tend to the other things that were calling me that day. I tried valiantly to ignore the laundry to no avail. I managed to silence the call of the weeds. I read a bit. And OK, FINE! I fell asleep briefly on the couch.

And all the while the roast was roasting….

And I do mean roasting.

It had been in there for about 4 hours when I started to think that it smelled really done. I often cook by “smell”. If something, say bread, smells done then it quite often is.

This smelled really, really done. In fact, I had been smelling it for so long that I didn’t think I was going to be able to eat it when dinner came around. I was that sick of the smell.

HMMMMM, I had better check it just to see.

Open the oven door, pull out roaster, take off lid…..

Wow! A deer hockey puck. Now we can get rid of all those rubber ones that are made from petroleum products and just make hockey pucks out of deer flat roasts.

You know how it is when you have cooked something and you just know, in your heart of hearts, that it isn’t right. That it is never going to be right. And that there is absolutely nothing that can be done about it?

It was one of those times. It was so bad that I didn’t even have the heart to take a picture of it. And you all know that I am not adverse to taking pictures of my humiliations. If you don’t remember that then remember this picture… 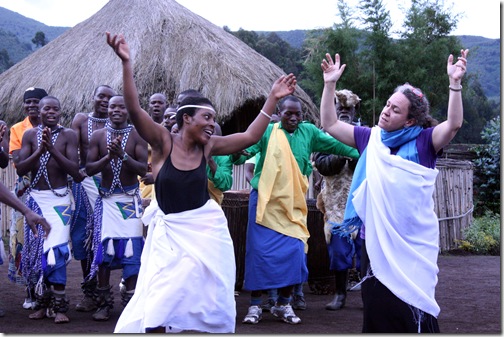 Or perhaps this entire post. Remember, I thrive on my own humiliation. If I can’t laugh at myself then other’s will take up the duty.

And then I did what any self respecting cook would do. What I am sure Julia Child did on more than one occasion when something didn’t go quite as planned.

I slammed the lid back down, took the thing out of the oven and let it sit there on the cook top all the while telling myself that it will look better once it has cooled down and reabsorbed some of the juices.

Baby there was not enough time in the world for that thing to reabsorb enough juice to make it other than what it was. A piece of perfectly good venison that was now drier than the Sahara desert.

But I am not one to shy away from a challenge. And I wasn’t going to let some over cooked piece of Bambi get the better of me! I raised my hand in defiance, got out my big Cutco knife, chopped the heck out of the meat.

Or should I say sawed on it like a lumberjack until it was in small, slightly crisp and dry pieces.

And then dumped BBQ sauce, homemade thankyouverymuch, all over it. We will have BBQ Bambi for dinner. Yes we will.

Or should I say that HHBL had it because I just couldn’t bring myself to eat it after having smelled it cooking and all that came after. And I could tell that, though HHBL ate his sandwich that it wasn’t all that great. And that the left overs that were left over would languish long in the refrigerator and not be eaten.

And so, I threw the rest out. Yes, yes, I know that there is some starving child in deepest darkest Africa that would like to have that meat. But somehow I doubt it it was that bad.

And I was so traumatized by the event that I had to go out later for some Wendy’s Frosty therapy. It helped.