Do you know what today is?

I have to apologize in advance for the length of this. But I think 25 years deserves a mess of pictures and commentary. 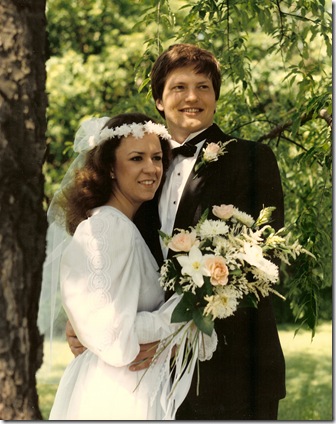 Look at this couple, just look at us. We had ABSOLUTELY no idea what would lie ahead.
We were babies.
We were amateurs.
We were clueless.
Isn’t that the way that most people enter a marriage. Stars in their eyes and no clue whatsoever. Maybe that is the Lord’s way of making sure that people actually get married. Hmmmm. 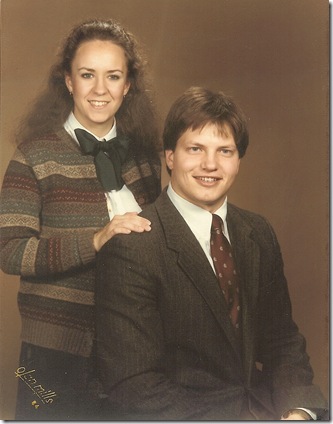 Cute engaged couple (despite the hideous bow thing around my neck. What was I thinking?) We had no idea how to be an engaged couple let alone a married couple. HHBL and I met on a sort of blind date in September 1983. We were set up by my aunt and uncle, bless their hearts. We didn’t see each other again until December of that year because we lived in different states, I wasn’t looking for someone to date and HHBL already had a girlfriend. We started dating that December even though he lived in Ohio and I lived in Illinois. Evidently he likes to think that it was love at first sight, or so he enjoys telling people…..even though he knows better.

We dated long distance from December ‘83 to April ‘84 when he asked me to marry him and I said yes. You do the math on that one….and it was LATE December when we started dating. Yes, just about 4 months of dating. To add up all the times that we actually spent time together before we were engaged we think it was about 8 weekends.

You read that correctly……8 weekends….and then we were engaged.

I didn’t say that we were the brightest bulbs in the socket.

And if we had had even somewhat adequate pre-marital mentoring we might have been saved some headaches and heartaches. But the Lord is always in control, even of stupid young people. 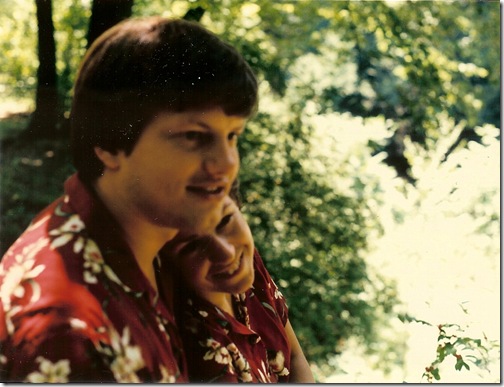 Looks are deceiving aren’t they. We look happy. We weren’t. HHBL and I would both tell you that our first year of marriage, heck our first five years of marriage were rough. We had no communication skills and at times I am not sure that we really liked each other. We were both determined to change the other person and had no need to change our own, clueless selves thankyouverymuch. By our fifth anniversary we had two children and a third just about on the way. We had become entrepreneurs and HHBL often worked many, many hours…and we still had no ability to communicate.

And then we went to a business conference, one that had nothing to do with marriages. But sometimes that is how the Lord works. And while we were there we heard these people speak and they saved our marriage even though Bill and Anabel Gillham have no idea that they did. We learned that loving someone is an action, not just a feeling. And we both fell on our faces before the Lord and asked Him to change ourselves, our stupid, selfish selves.

HHBL we have been through a lot together. And it seems like these 25 years have just flown by. 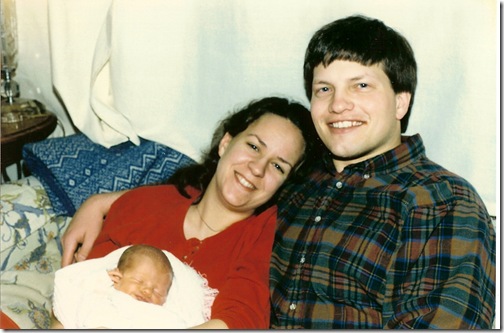 We have walked through the ups and downs of being parents to three closely spaced daughters. No one ever tells you when you have all the fun of making the children that there is no owners manual for what you take home from the hospital. I know what I would have done without you in this. When I was all but spent by 6p you were there to make sure that the girls got their baths and got in bed. When I was so depressed after Shoe Queen’s birth, even though you didn’t know that I was in such a bad place I knew that you were there to help. 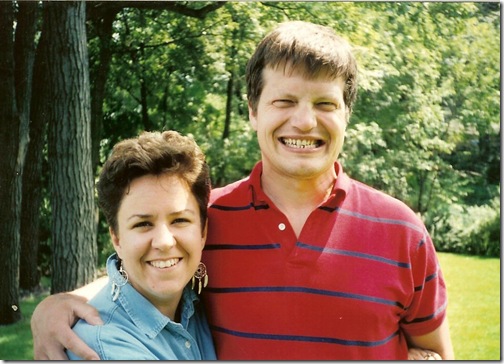 We have endured 15 years where my hair was often way shorter than yours. I know that you didn’t like it at all but you gave me the ability to express my individuality in the only way that I had at that point. Al Gore hadn’t invented the internet yet and I had no idea that I had so many words and pictures trapped inside myself just waiting to burst forth. 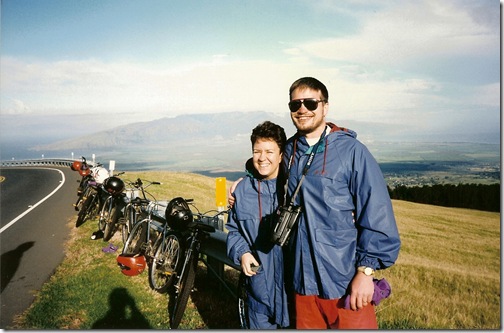 We have ridden bikes down Haleakela in Hawaii and a mountain in Skagway, Alaska. Hawaii was infinitely more fun than Alaska. And who knew that you could be so cold in Hawaii!! 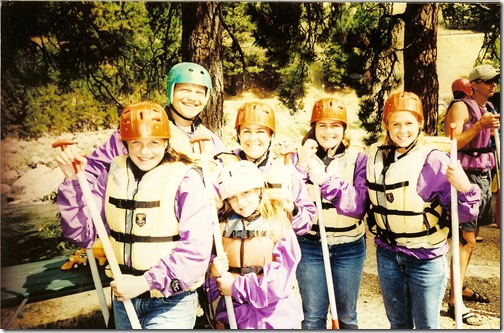 We have white water rafted in Idaho and Alaska. Although the Alaska rafting was more like floating down a placid river with the promise of alcohol at the end. Violet Vikings FOREVER! 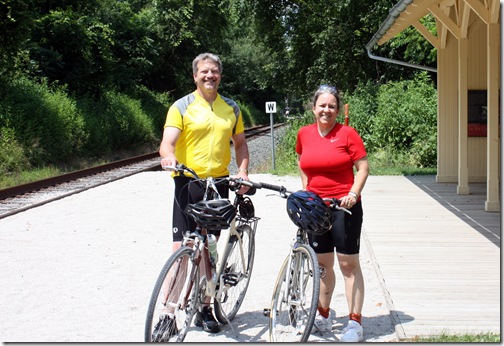 We have gone on other bike rides together. You are a much better bike rider than I am but you always try to make it a great experience for me. In fact that is sort of what I could say about my life with you in general these days.

You try to make it the best experience possible for me. That is just the kind of guy you are. 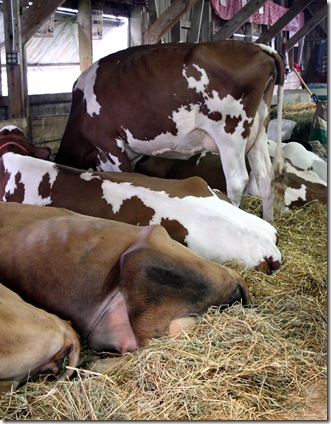 We have viewed many a cow butt together at the Geauga County Fair. It’s those kinds of things that make a marriage rock solid. Yes indeedee. 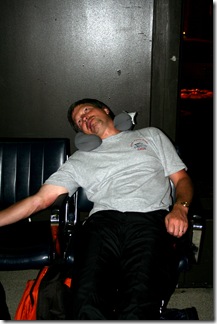 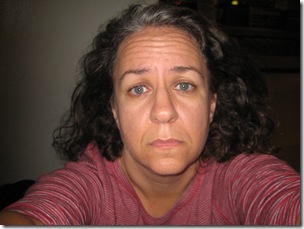 We have had to endure sleeping in the Newark airport because we missed a flight to India. And then sitting in middle seats for the 14 hour flight that we finally got on. And then trying to check into a men’s only Muslim hotel in Delhi until we figured out it wasn’t our hotel. Oh now THERES a story. You just have to take these things in stride and with some sense of humor. If not then you might just end up strangling some idiot Continental employee who thinks that it is a better use of their time to go and get a Starbucks latte rather than helping you to find a freaking hotel room and get on a plane at some point. 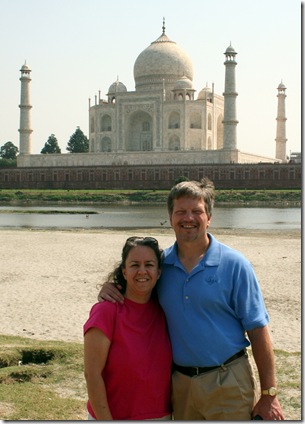 We have seen the Taj Mahal together. Granted it was the back, or butt end of the Taj…and we had to make our way through the people trying to sell us watches, key chains and postcards. But we did see the Taj, that monument to eternal love. 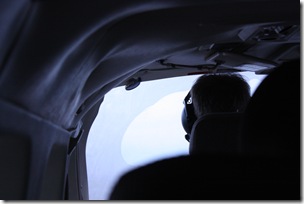 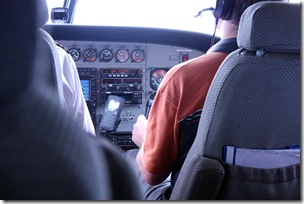 We have ridden in more that one really small plane. Planes where the pilot had to wipe the condensation off the windshield in order to taxi and fly. Planes where you had to exit via walking on the wing and jumping down. Planes that went through scary thunderstorms. Only one time have you been allowed to actually fly the plane. I am grateful. Just a reminder to never adjust your seat with your hand also on the wheel of the plane. 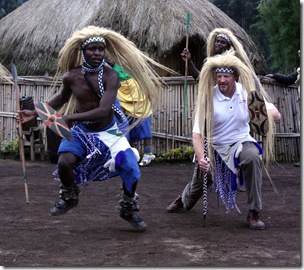 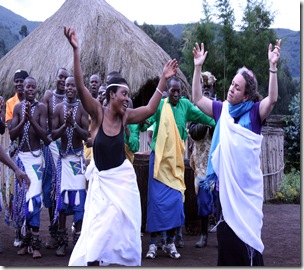 We have danced with the natives in Rwanda. OK, the poachers turned cultural attaches to the silly tourists. There was some talk of them returning to their poaching ways after we visited. Evidently our style of dancing was terrifying to them. I don’t understand why. 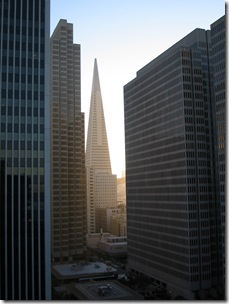 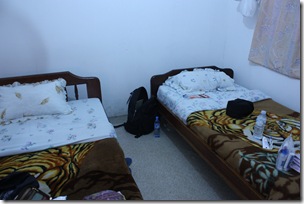 We have stayed in 5 star hotels like The Ritzi Carlton in Naples, FL…and we have stayed in places like The Hotel Vanilla in Bundibugyo, Uganda. I have loved the whole gammit of places where we have laid our weary heads. But sometimes, the places that aren’t 5 star are the places that I remember the best. The Japanese honeymoon hotel in Honolulu….the tiny hotel room on Maui where the rooster crowed all night and all 5 of us shared one bathroom and not enough beds….the kibbutz in Israel….the bedroom in Salem, India where you had to remember to lock the door so the monkeys didn’t get in and look for food and do unspeakable things into your luggage. Good times.

We have traveled far and wide together: East Coast, West Coast, Mexico, Venezuela, Peru, Ghana, Rwanda, Uganda, India, Australia, New Zealand, Israel, Great Britain, Hawaii, Alaska and many other places in between. I can’t think of any one I would rather travel with than you. You put up with my traveling idiosyncrasies, my needing to be at the airport much earlier than you want to go, my wanting to board the plane RIGHT NOW and all the other stuff. 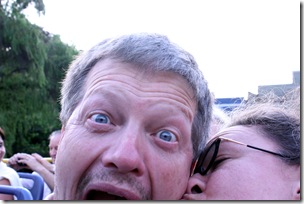 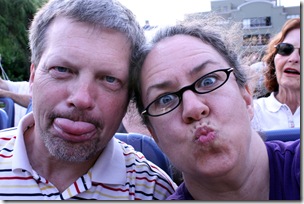 And through it all I have come to appreciate your sense of humor, your honesty, your integrity, your love of baseball, your inability to put things together (that is what you have me for), you laugh, your “thin lips look” when you are peeved, your love for the Lord, your striving to be the best that you can be in whatever you undertake, your putting up with my craziness, your calmness in the midst of my chaos, your ability to remember every telephone number that we have ever had as well as every address.
HHBL I love you more than I thought it was possible to love you. My love for you grows with each passing year. You make me nuts sometimes but I love you totally. I can hardly wait for the next years that the Lord has lined up for us.

Happy Anniversary!!!
Your Little Butthead
Posted by Debbie at 5:48 AM