When I was growing up one of the things that I looked forward to the most was the time when my mom (Hi Mimi!) would get out the Christmas stockings. My Christmas stocking was the item I loved the most in our Christmas decorations. I loved it then and I still love now. You see my stocking, and all of our family stockings for that matter, were knit by my Grandmother Amsler. HHBL and I were counting last night and I think that she has to have knit 15-20 of these stockings over the years. I know that we have 5 (one for each of us) plus two extra. When HHBL and I got married almost 25 years ago, that first Christmas we were together Grandmother brought him a stocking. When each of the progeny arrived, so did a stocking. 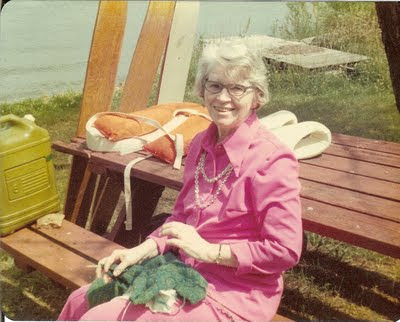 If something could be knit then Grandmother could knit it I have no doubt. She had this absolutely amazing cream colored wool coat that she had knit. It weighed a ton, was as warm as a polar bears pelt and had red satin lining. Oh I long for that coat. Even as I write this I am wearing a sweater that Grandmother knit for me. It is warm and beautiful and a bit scratchy but I love it. I am never cold when I wear it. 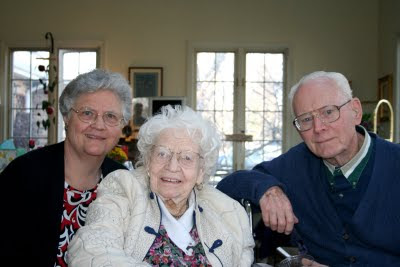 However, Grandmother doesn't knit anymore. She is 97 years old, will be 98 in March and it is just not something that she can do any longer. Every time I would get the stockings out and hang them I would be saddened by the thought that my sons-in-law and my grandchildren wouldn't have the same stocking. Those lovely, scratchy, heavy red wool stockings that smell like Grandmother Amsler's house and can hold an amazing amount of stuff. I hated to see the tradition die but what were we to do. The pattern was long gone. 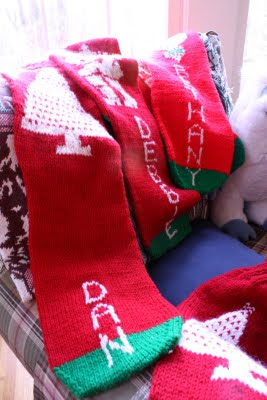 Aren't they the most wonderful looking stockings. Each one has a different design on the top, our names knit into them and green heels that you can't see in this picture. 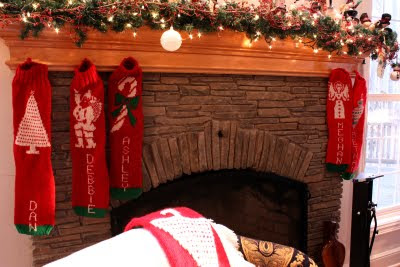 I love seeing them all hanging over the fireplace. It just makes me happy.
Then a year ago my Aunt Sue, my father's youngest sister (much closer in age to me than my dad), sent out a blast family email. She wanted to know if anyone had the skill to take on the task of knitting more of these socks. She doesn't knit, the pattern for the stockings has long since been lost. Did anyone want to do this?

And without thinking it through, like that commercial from years ago where the guy goes, "I can do that!", I raised my hand and volunteered. I am a pretty fair knitter I told myself and I can figure this out. So what if there isn't a pattern for the stocking, it is just a big long sock and you knit those all the time. So what if there are no existing patterns for the designs at the top of the stocking, that is what graph paper and mechanical pencils are for. I can do this!

I charted the pattern that I wanted to use. I bought yarn that I thought was as close to the original yarn as I could get. I cast on using DPN's (double pointed needles). I zoomed along through the ribbing at the top and then........and then........ and then

I hit the design. And I have to say, I was stumped, kaflummoxed, crazed. I said things that would singe the ears of many people and I hang my head in shame at that. I ripped back more times than I like to think. I started again and again but I just couldn't seem to get the thing to work for me. I could see that EMA (that is my grandmother, Elizabeth Mortenson Amsler) had obviously knit the stocking flat and then seamed up the back. I figured, in my arrogance, that I could do this just like a sock and not like EMA had done it. I knew all about how to knit socks doggonit!

But what I didn't understand at all was how to knit using two different colors of yarn, Fair Isle knitting as it were. I had no clue. And because I became so frustrated with this project that I thought I might just blow a gasket, I put it away. It sat in a basket on my sewing desk, still on it's needles. It sat there for 9 months, mocking me. Showing me my inadequacies as a knitter and reminding me that I was a quitter. I hate being a quitter.

And I will be honest here, because I have to be an open book about things and you all understand this. I wasn't truly emotionally invested in the stocking. Dana is the sweetest thing and she is a great wife for my cousin Doug. But I just wasn't emotionally invested. And yes, if you are a knitter you will understand what I am saying. It is really hard to knit something that is new to you if you aren't really into it. Really hard.

But then along came The Almost Son-in-Law who I do love (not that I don't love Dana). And there in came the crisis. The Almost Son-in-Law will be with us for Christmas this year. He and the Engaged One arrive back in the good old USofA on December 23rd. And that would mean that he wouldn't have a stocking hanging over the fireplace that matched all the other stockings. Esthetically unpleasing and not very welcoming to the family I was thinking. Performance anxiety and eagerness to please rearing their ugly heads.

The time had come to gird up the loin cloth, to put on my big girl panties and get over the fear. It came time to conquer the stocking. And when I realized that I was going to have to do this I took some time and just sat with the stockings. I got out the ones that EMA had knit and I took a second look at them and I realized something. I realized that in my arrogance I had overlooked the fact that the way to knit these things was just as EMA had done it, flat and then seaming them up when all the knitting was done. It had to be done that way or the design just didn't turn out at the top. 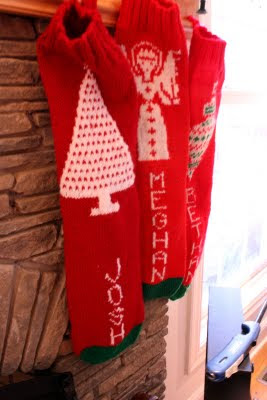 And it worked. Notice the name on the stocking. That is The Almost Son-in-Law.

And now I know that this tradition will not die. I can knit them for my future SIL's and any grandchildren that come along. Heck, I can do these things for the children of my cousins if they so choose. Can I tell you how excited I am.
Posted by Debbie at 12:19 PM