Let’s start with a couple of pieces of information.

- Monday is garbage day here at Chez Knit. And holy schlomoly do they come early. So it behooves you to get your garbage out to the curb by Sunday evening.

- Evidently our next door neighbors to the east do not actually inhabit their domicile except for certain times of the year. They live in a big city and just come into town for holidays. We have been told that they are younger and this house may be a part of their retirement plan. OK. And I am not exactly sure what constitutes “younger” in this case because the neighbor that was telling me this is in middle of her eighth decade of life. Anything under 70 years old may be a “youngster” to her.

So Monday morning, that would be yesterday, arrived bright and clear. Or in my case bright and bleary because of a less than optimal night’s sleep due to a skunk who seemed to take up residence under our bedroom window. One of my neighbors commented last night that they had seen a cute little baby skunk walking through the neighborhood on Monday morning. Well I know where he spent Monday night, right outside my window. My nasal passages are still recovering.

So Max the Magnificent and I carefully exited the garage early in the morning, making sure that there was no skunk in the vicinity, and made our way down the street in that lovely morning ritual of walking the dog and slinging the shit.

There I go again! Goodness gracious. But that is what happens after I pick “it” up with my plastic bag clad hand. The bag, now weighted with something warm and solid, just seems to want to swing along as I walk. There must be some sort of physical law for this. Einstein’s Theory of Shit Swing or something.

But I digress even further.

SO, Max and I had just completed our “rounds” and were walking by the non-neighbor’s house when I noticed that there was garbage in front of their tree lawn. How odd. They are not there, having returned to the big city right after the Labor Day holiday. But someone must have come to their abode and put out the garbage. And I was almost past the small pile when something caught my eye. Which is amazing considering it was still mostly dark.

Something made with yarn.

Yes, the yarnometer went into high screaming mode. Sort of like one of those metal detectors only it screams YARNYARNYARNYARN. And as I quickly crouched down I could just make out that it was an afghan of some sort, crocheted by the look of it, acrylic by the feel of it.  And then I was faced with a dilemma.

What condition is it in?

What was the specific reason that it is being thrown out. Well, it was in the colors of the University of Michigan so I would have thrown it out for that reason alone but…..

Is it dirty? They have small dogs. Was it fouled with canine fecal material?

So I went inside. But that afghan was on my mind. I thought about it as I sipped my morning beverage of choice. I contemplated. I wondered. I don’t like yarn to go to waste.

And I especially don’t like yarn to go to the landfill, which is where this would have gone in about 10 minutes if I didn’t act because I could hear the garbage truck coming into the subdivision. I must act!

But by this time it was light outside. People could see my comings and goings and garbage pickings.

Oh what the heck! I ran, crouching as if by making my bulk smaller I could avoid any prying eyes. I grabbed the afghan, hoping that the only reason it was slightly damp was because it had been sitting out in the dew all night. And I skeedadled back into the house hoping that I would not become a topic of  gossip at the neighborhood quarterly dinner that evening (these people REALLY know how to gossip!!)

And I was pleasantly surprised. It was just dew damp. There was no evident fecal material. The yarn seemed to be in pretty good shape.  It just had one hole in one corner.

So today it received a very good washing and drying. And I am currently frogging it back so that it can be made into blankets for the Hamlin Fistula Hospital. 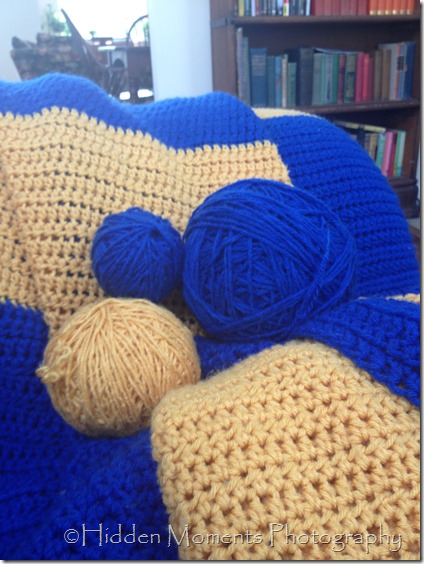 Or stay crocheted in afghans that are in the University of Michigan colors.

That is really the crime of crimes. On both counts.