Well here we go again, another Friday on the Merry-go-round of life. You know what you need to do. When you are done gathering your insulating layer of blather you need to click on the picture above to be whisked, at the speed of rapidly approaching winter, over to Conversion Diary to see what is happening there.

I blather for no apparent reason.

1.
I am sure that you will be thrilled to know that I updated my iPhone and iPad to iOS7 yesterday.

And the Earth continues to rotate on it’s axis, the polar ice caps haven’t melted (take THAT Al Gore) and nothing exploded.

Of course there are several apps that didn’t want to play well with others, Overdrive being one. I did the old “uninstall and reinstall” thing and now it is working fine.

I am liking the update so far although, as my KnitSib/Photog friend Jess said, “It looks a bit cartooney”. Yes, there is that. But overall not too bad. Of course, I am at the beginning of the learning curve so who knows in the end how well I will like it. As with any change, I just have to get used to it. And my iPod touch is so old that I don’t even think the new software will apply to it.

I had better start saving up for a new iPod. Cuz Old Faithful is slowly dying. Yes, I know that having an iPod and an iPhone seem redundant but they serve different purposes. Old Faithful is really dedicated just to audiobooks and music. Mr. Runmylife does everything else. So once Old Faithful dies he will need to be replaced.

I think I rabbit trailed here.

2.
I am still learning my way around the area but making strides. I ventured into Parma this week and no one asked me to show my passport. I found the closest Bed Bath and Beyond. Or at least it “said” it was the closest according to the website but I am thinking that it isn’t. I have to put that to the test.

Next week I venture south a bit.

I can tell that you are SO excited about this.

I don’t like disorientation. That is why I would never make a good drunk or drug addict. I hate the feeling of being out of control. And I act all weird. Ask HHBL what I was like when I had several doses of Dilaudid, IV, when I ended up in the emergency room just before my hysterectomy.

All I can say is WOW.

Hmmmmm, again, I started in one place and ended in another. Trend? I hope not.

3.
Is it seriously wrong of me that I am waiting with great anticipation for Fall, when I can watch all the leaves fall from the trees and know that HHBL and I don’t have to spend every weekend in October blowing leaves into the ravine or woods. I can just sit at my kitchen table and watch the landscaping crew take care of it.

Really, I think that is one thing that both HHBL and I are really going to enjoy. Fall has traditionally been one of my favorite times of the year. That is until we moved to OCK and realized how much work it was going to be to take care of all those leaves. Once we fully understood what “leaves falling from trees” meant for us, working every weekend to shift them, then October wasn’t a favorite month anymore.

But now someone else gets to mow the grass and take care of the leaves.

4.
Can I tell you how much we are enjoying the fact that we now can just hop on the highway and get into Cleveland in 15-20 minutes, rather than the 40 minutes it used to take.

HHBL sent me a txt message yesterday at 3:30p asking if I wanted to go to the Indians game that night. Bleacher seats were still available

What other answer could I give but….YES!

In years past Indians games had to be planned in advance. It wasn’t convenient for HHBL to just swing home and pick me up before the game because his office was a 30 minute drive in the opposite direction from downtown. But now Chez Knit is on the way into the city.

Still getting used to using the Panorama on the iPhone but still I love this. And I love sitting in the bleacher seats. For many years we had Indians season tickets in various parts of Progressive Field, but never in the bleachers. I wouldn’t go back to having season tickets in the regular seats because they are SO expensive, even for the 20 game plan.

But I would consider a 20 game plan in the bleachers. The “vibe” is much better out there and you can see the whole field.

We had a blast!

AND the Indians won when Matt Carson hit the winning single in the bottom of the Ninth. Which means that the Indians are still half a game out of the Wild Card race. Can they make it??

We are all hoping so.

5.
It is almost Fall that means that it is time to cast on a sweater, which I did on Wednesday. 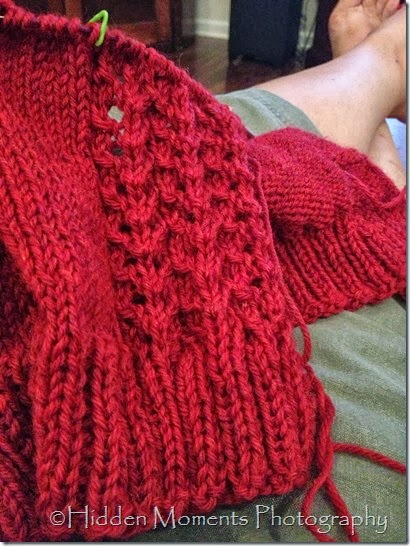 Well, to be honest, I actually cast on on Tuesday, after I had swatched yuck patooie!, washed and dried the swatch and measured. But I didn’t get all that far on Tuesday so really I started on Wednesday. And I am obsessed with knitting on it.

6.
I am diligently working through my backlog of podcasts.

I have podcast overload going on, or at least I did. I don’t watch much TV during the day but I do listen to podcasts or audiobooks. But this summer has just been crazy (as I have told you WAY too many times) and I have been here and there and everywhere and haven’t been listening as diligently as I should have.

All of a sudden I looked at my Downcast list and there were about 50 podcasts that I hadn’t listen to. And a lot of the podcasts in my list are 30-60 minutes in length.

That is a lot of listening.

But I have whittled it down and will be caught up today.

Just in time for a “use 4 credits and get $10” sale on Audible. And I just happen to have 4 credits to be used. And a really long Wish List.

7.
As far as unpacking goes here at Chez Knit, we are down to the boxes that hold stuff that we don’t need very often. That is good.

But there are also a couple of boxes of stuff that has been packed up for more that three years…..

And that is bad.

Then I am guess that we don’t need whatever is in there.