Today we had produce from the garden.

Joy of joys and a big hallelujah!

Now, it isn’t all that much produce so don’t get yourself too excited. It is May after all and it is the Frozen Northeast Ohio and we did have snow flurries on Mother’s Day I am told. I wasn’t here to witness it thankfully but Knit Sib Larissa kindly put a picture up on Facebook for all to see.

LaurenLeap and I were in the garden for three hours today just diggin’ in the dirt and pullin’ the weeds and generally getting our gardening mojo on. We did manage to dig up some self sprouting potatoes and get them into one of the potato pots that I made (more on that in another post) and LaurenLeap spent time thinning the beets. Or she was SUPPOSED to be thinning but I suspect that what she was really doing was gently pulling up the seedling and transplanting them. Oh it felt good to be in the garden. I will admit that come October in my gardening year I am ready to be done. I am ready to put the garden to rest, to close the garden gate and go read a book. That feeling lasts until around February I would say and then I start to dream about the garden. And the produce.

Then comes April when LaurenLeap and I look at each other and think, “You know, we COULD get out there and plant something like spinach and lettuce. It isn’t THAT cold.”

But really it IS too cold. Unless you are Scott, one of our gardening buddies, who has a small cold frame.

We want one. Badly.

We do get out there by the end of April and plant spinach and lettuce and beets. By the middle of May we have broccoli in the ground and we are desperately wondering when we can plant tomatoes…..and Brussels sprouts….and beans. Today, as we were working, up walked one of the new garden plotters by the name of Jim. He handed us plants he wasn’t using. He THOUGHT they were the rest of his Acorn squash but he had lost the name tag somewhere along the walk from his plot to ours. They might be Butternut but he is pretty sure they are Acorn and did we want them?

Ummmmmmmmm, Is the Pope Argentinian? YES!

Those went in the ground today as well.

And when we were almost finished I noticed that there were actually some radishes that were large enough for just one mouthful. There were two of them. Now how nice is that! Two of them and two of us. 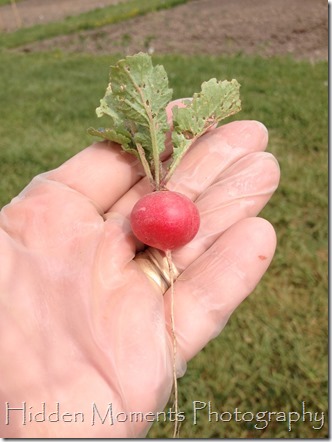 Can I just give a hearty YUM! LaurenLeap ate hers and thought there wasn’t much flavor to it…..and then the heat kicked in. WATER!

Radish sandwiches are in my future.

And when I walked back to Coco and drove home I was the proud possessor of spinach for our salads tonight AND enough Rhubarb to make a dozen muffins.

Joy of joys I love gardening.

Now I have to figure out what to do with the half sack of garlic that LaurenLeap gave me. I think I am going to finely chop it, put it in oil and freeze it. You should NEVER store garlic in oil at room temperature or in the refrigerator. Unless you are looking to get a really great case of Botulism.

Just your PSA for the day. You can thank me later.

Email ThisBlogThis!Share to TwitterShare to FacebookShare to Pinterest
Labels: 2013 Garden