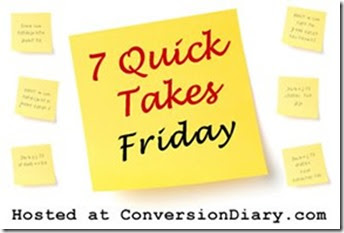 Well here we are again, gathered around the Friday table for a hearty meal of blather. You know the legislation. When you are done with you blather inoculation you need to click on the picture above to be whisked, at the speed of my ever expanding bahookie (see #1) over to Conversion Diary.

This is what I had for breakfast yesterday. I was a bad girl. But Oh how I love Cinnabon. I usually avoid that place of sugar sin. However, they have kindly developed this nifty little cup which holds the cut up centers of Cinnabon rolls all covered with gooey stuff and convenient to eat with a fork.

Saw the first humming bird of the season this week. He didn't stay long, just zipped in and zipped out. I will be honest and say that I filled up the feeders initially with liquid food that I had bought at the end of last season. It had been in the frig for a bit but it was all that I had available. I have since bought fresh food and refilled.

Last week I mentioned that we had seen the first batch of goslings at the lake. If you look you will see five little fluffy balls of waddling goosehood. This picture was taken on May 2nd I think.

Now look at a picture I took on Tuesday of this week of the same family of geese....

Do you see something missing? Or should I say someone? There is only one gosling rather than five. I know you are thinking that maybe the other goslings have just wandered off a bit. But goslings at this age don't wander and even if they were so inclined, mommy and daddy wouldn't allow it.

Nope. In the space of a week I would guess that the resident Bald Eagles have been feasting on juicy, tender gosling.

For some reason I feel like singing a rousing chorus of "The Circle of Life".

Now that Chez Knit is off the market I am thinking about pulling out the boxes that are packed up in the basement and going through all of them again for another round of clean out. I did this the last time we took the house off the market, eliminating about half of the boxes.

It is time for another round.

For the most part I haven't missed whatever is stored in the boxes and that tells me that I can live without the contents. I would guess that I will be selling more things online. Or donating.

Just so long as things get cleaned out and decreased I am happy. My ultimate goal would really be to have only things that we actually use.

Wouldn't that be excellent.

I tell you, my iPhone can take crazy good pictures at times. I wouldn't have been able to get this photo with my point and shoot camera. When I was still using a point and shoot that is.

In fact I just sold my little, and fairly ancient, point and shoot camera on Amazon for a mere fraction of what I paid for it. It has been languishing at home for a year, never being used, since I got my iPhone. It was time.

Now is probably the time to tell you that I am taking a week blogging break next week. I have a crazy week scheduled, seeing old friends, Friday evening and all day Saturday photographing a wedding, family stuff. Something has to give.

I wouldn't know what to do without you.

I will try to maintain the 365 photos project though. Actually I should say that that is going to turn into an 18 month project but it gets done as it gets done.

I will be back to full blogging on the 20th with lots of pithy blather I am sure.

Lets end the week with another family photo shall we. It my continuing effort to be totally open with all of you. I believe this was during my "Wash my hair? Why should I wash my hair?" phase. Why wash my hair when I can wear a bandana for a week at a time.

And I am not even going to go down the road of talking about Pilot Man's plaid pants.

Posted with Blogsy
Posted by Debbie at 9:06 AM