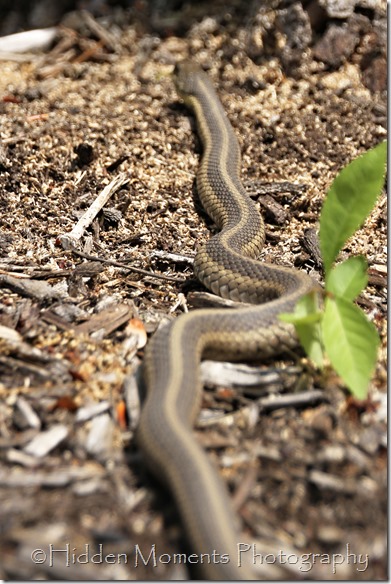 First of all, tell me what movie the title of this post came from.

I was walking down the driveway this afternoon, schlepping two bags of garbage to the can waiting at the curb, trying to get them there before the garbage man came down the street (he still hasn’t arrived by the way), when I was viciously attacked by this snake.

You don’t believe me?

Ok, FINE! I was carrying the bags down the driveway, minding my own business when I noticed the snake sort of half on and half off of the driveway. At first I thought that it might be dead since it didn’t move as I approached. But when I leaned down to check….

He moved his head to look at me.

I shrieked! Then looked around to make sure that they neighbors hadn’t heard my cry of terror.

He weaved his head back and forth.

I put down the bags of garbage, told the snake to stay there and walked back to the house to get Big Bertha.

I came back but the snake obviously didn’t want to do what I told him. He was making a break for it at a very slow pace. Slow enough that I was able to take eight or so pictures before he had had enough and told me to go away.

This is a picture I am definitely going to have to play with some more.