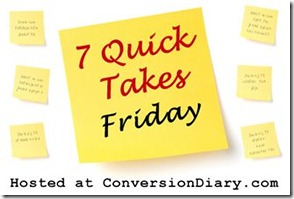 Good golly there is still too much to do!! You know the rules even though I tell them to you every week. Sort of like reminding you to always put on clean underwear before you leave the house. No?

When you are done with your necessary weekly dose of blather click on the picture above to be whisked, at the speed of the approaching reindeer hoof beats, over to Conversion Diary.

1.
The company Christmas party is scheduled to be held at Chez Knit tomorrow night. And that means that I have been in party preparation mode for several days. The last two days have really been taken up with baking cookies. And I am SICK of cookies now.

When the progeny were growing up I don’t think there was a week that went by when I didn’t bake at least one batch of cookies. We were big on cookies. But now that they are all out of the house I never bake cookies. I never bake them because if I bake them then HHBL and I will eat them.

No cookie will power exists here at Chez Knit.

Today it is on to the rest of the food preparation.

2.
Regarding #1, one of my biggest fears is that when giving a dinner party or any sort of party that I would run out of food before the guests have run out of appetite.

Seriously I fear this. Greatly.

And that means that whenever I plan one of these kinds of events we always have WAY more food than we would actually need for a party. And I kill myself thinking of the menu and planning the menu. Fear rules.

SO this is the menu – Heavy Appetizers. Tell me if we will have enough cuz if not then I still have time to add some things to the menu.

3.
We have a Keurig coffee maker here at Chez Knit. We were actually on the Keruig band wagon long before they became highly popular as HHBL had encountered one at some office and had been totally sold on it. He loves his flavored coffee in the morning, or the afternoon, or the evening.

I am not so sold on flavored coffee. That is why you will never, and I do mean NEVER, see me ordering a Pumpkin latte or any other form of flavored anything at Panera or Caribou.

And I like to grind my coffee beans right before I actually brew my coffee, hence my use of the grinder every morning at 5:45a and the beans from Uganda or Sumatra or Costa Rica.

BUT, it is a real pain to have to use the French Press in the afternoon when I want a smaller quantity of coffee than the bucket I usually drink in the morning. And that is where this little gem comes in 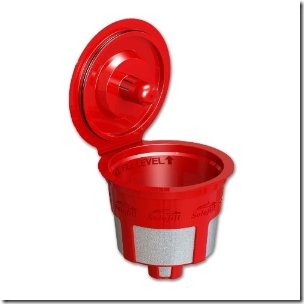 My solofill holds just the right amount of coffee for one cup. That is obviously what it is intended for. I love it. And I am going to admit that there is one kind of flavored coffee that I do seem to like a bit. Mary Mac gave me a big bag of “Toasted Coconut” coffee for a hostess gift. And I wanted to at least try it so I went and bought the Solofill and I made a cup.

Hold on to your hats……

It really tastes best with a bit of milk in it. NO SUGAR just milk.

I know, I know. It is hard to even conceive that I who drinks her coffee black and no sugar would “adulterate” a cup of coffee. But it was best that way.

But I am still not buying a latte of any kind.

4.
I think that maybe, just maybe, I am all done or almost all done with the Christmas shopping. There are a few little things to still get but all the big stuff is done.

I may indulge in a bit of Christmas knitting still but not too much. You must be “knit worthy”.

5.
Sorry Time Warner, still not missing you since our breakup. I have a new boyfriend, or rather an old boyfriend with new possibilities, Netflix.

AND we indulged, for the very first time ever, in actually “renting” a movie over the internet.

And no it wasn’t something naughty (that was for you Mimi as I can just hear your voice asking me). It was actually National Lampoon’s Christmas Vacation which I think is one of the more brilliant stars in the Christmas pantheon of movies. For some reason HHBL hadn’t ever seen it so we just had to watch it last Friday as I really needed some laughter in my life that day. We do not currently own it but that will be rectified shortly.

6.
The day after Christmas starts the annual round of “year end accounting” posts here at Chez Knit. With maybe a “what I am thinking about accomplishing in 2013” post thrown in, although I may save that one for when we actually get to 2013. I actually sat down the other day and wrote out a list.

And no, I don’t think the world is going to end on December 21st. Just thought you should know that.

7.
And finally for those who are wondering. I did NOT go to the midnight showing of “The Hobbit: An Unexpected Journey”. I thought about it. I had friends that were going and wanted me to go with them.

And then I remember what an absolute wreck it makes me for at least 24 hours afterwards.

And that segued into the fact that I have most of HHBL’s company arriving tomorrow evening at 7p and I still have a BOAT LOAD of stuff to do before then. And that just decided me.

But that doesn’t mean that I am not going to immediately go and order the soundtrack from iTunes.

Maybe next week after all the progeny are home I can convince them to go with me. It will be like old times.