Gardening is An Ugly Business

The garden is slowing down.

Giving less produce. A lot less. But one of the things that is still sort of plugging along is the broccoli. And I have to say that is just amazing to me because the broccoli plants that are still producing side shoots are ones that were nearly pulled up by yours truly way back in the early part of the season. We had planted two squares of broccoli and fairly quickly most of them became sickly little step children with no hope for the future. We cried over them. We begged them to get better, to perk up. But to no avail. LookLeap went on vacation and left me in charge of our mutual space….

And I pulled all of them up and put them in the compost pile. I was trying to save her the agony of doing it. She is more tender hearted than I.

Or should I say that I pulled MOST of them up. I left four plants that didn’t look quite so sickly. Hoping against all garden hope that they might prosper. That they might withstand the Japanese Beetles and the little white flies. And by gum they have produced! Nice large heads for the first harvest and now a steady stream of side shoots.

So I made a quick trip to the garden this morning after the walk and before the rain, just to see what was going on and to deal with a few of the tomato plants that have given the last full measure of devotion and aren’t going to produce anything else.

Ah there are broccoli side shoots! Lovely. I think there are just enough to steam and then throw into a pan of Chicken Divan.

So I cut them and threw them in the bag along with a tomato or two and toted them home. Left the bag with the broccoli on the counter while I went off to do my usual Monday errands and then back home to steam the broccoli.

I had just finished steaming the last of the beets. I had replaced the water in the pan and was waiting for it to start to steam so I figured that I would take those few minutes to trim off any leaves from the broccoli. Dumped the shoots out onto the counter, picked off the leaves and about this time the water was boiling so I dumped them into the basket to steam.

I gather up the few leaves that are on the counter and throw them in the compost pot.

Oh there are a few more “greeblies” on the counter. I will just pinch them up with my fingers and……..

You know sometimes when you are in the midst of picking something up your brain will register that you don’t really want to do that. Your brain screams out,

NO! You are so going to regret that you are picking that up.

This was one of those times.

Hmmm, I don’t think broccoli crumbs are supposed to be curled up like that, said one part of my brain to the other.

But it was too late. My fingers had already completed their appointed task.  And that was when I both heard the slight “pop!” and felt the slight “squish” of something that was not broccoli. 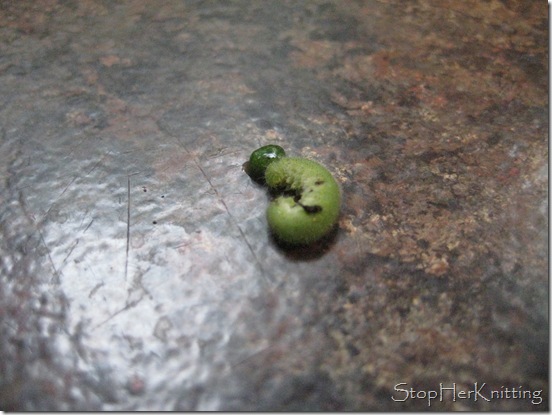 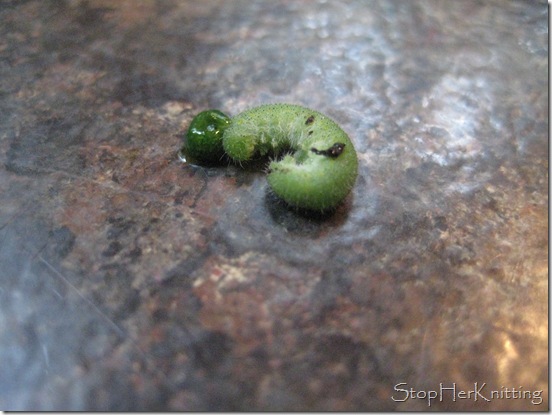 I don’t even want to contemplate which end that stuff came out of. And what has me even more skeeved out is the fact that…..

1. I left the bag with the broccoli AND bug sitting on my counter for several hours. He could have taken it upon himself to pack up his old kit bag and move to other places in my kitchen.
2. I might have actually steamed him and added him to the Chicken Divan.

Why does gardening have to include bugs?