Are you getting tired of garden posts?

Tough. I have a lot more of them in me. At least until October when we put the garden to bed.

I spent several lovely hours yesterday, early in the morning, communing with nature and laying waste to the weed world.

LookLeap had weeded the beds the night before and left the paths for me. An overly organized gardeners dream! Straight paths that need to be weeded. And I had my camera with me, which turned out to be a good thing as you will see. 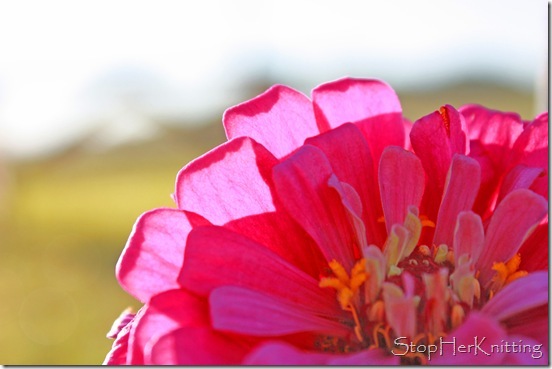 The sun was in a perfect position, just coming up over the hill and shining down on the zinnias. I love zinnias. They remind me of my Grandma Pringle who always grew them in her garden. 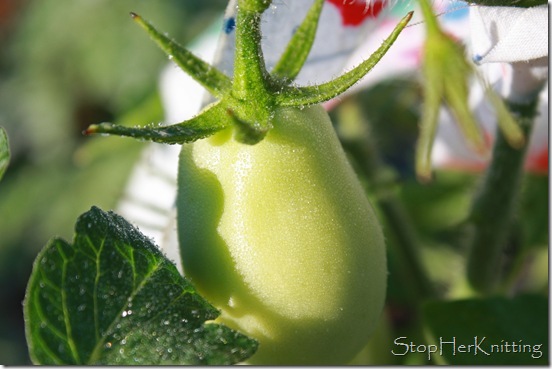 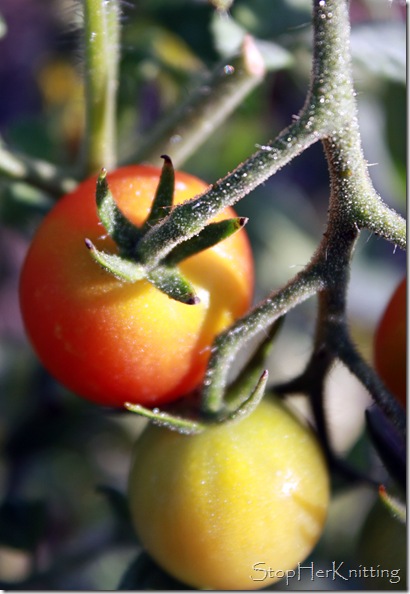 The tomatoes are doing well and are producing finally although they are still a bit behind. 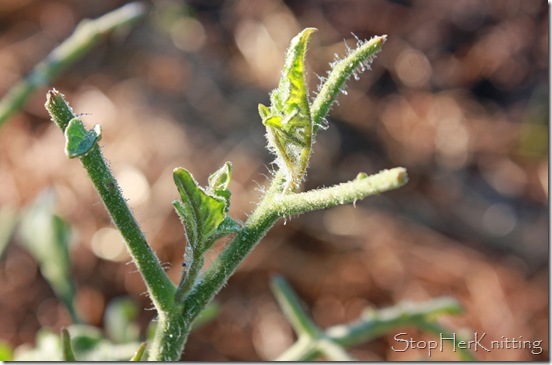 Even the damaged tomatoes are beginning to recover from their near death, Tomato Hornworm experience. 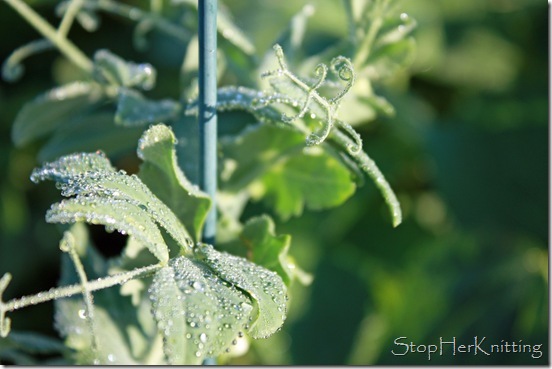 I am totally fascinated by the tendrils that grow on the pea plants. Especially with early morning dew. And the peas are pretty darn tasty. 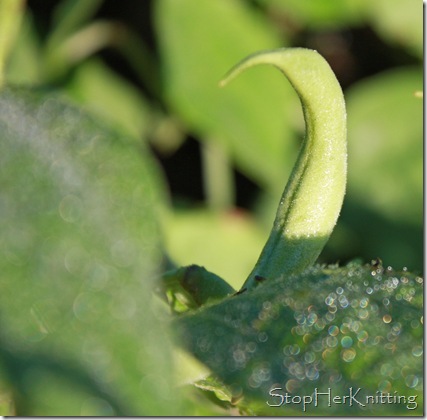 This green bean never made it out of the garden. He gave his life for my early morning pleasure.

And he was DELICIOUS. 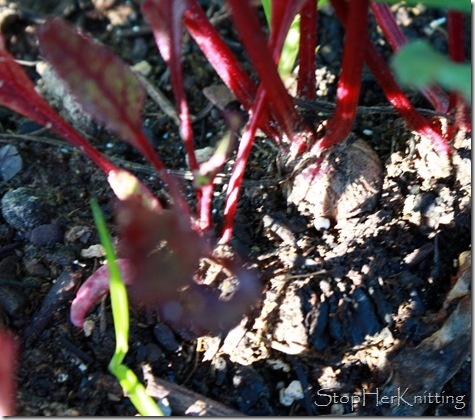 BEETS! My favorite veggie the whole wide world. Soon there will be some to pickle and throw on my salads. Oh joy! 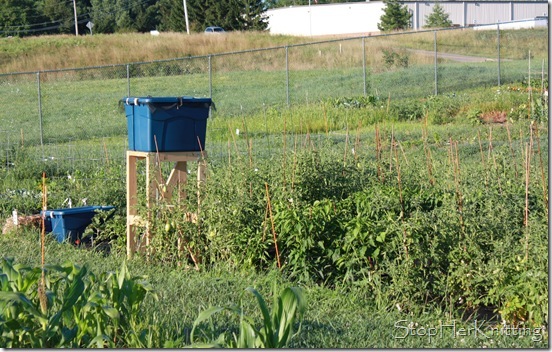 What I love about the community garden is getting to know the other gardeners who are toiling around us. This drip irrigation system belongs to Phil and Tina. Ingenious! 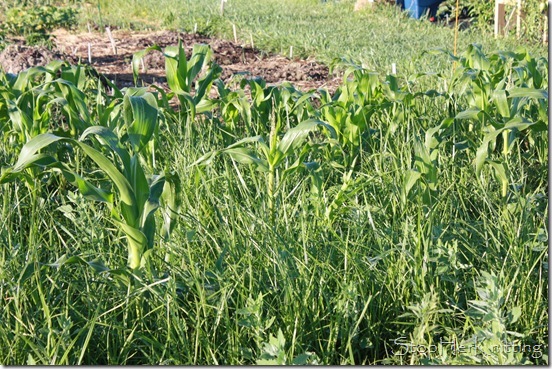 This plot belongs, I think, to a fellow named Jack. He came and planted his corn but has not done a single bit of weeding since then. We are having a bit of a problem in the community garden with people who rented a plot and then just didn’t do anything with it and have let it go to seed and weed. And that effects everyone else.

And it just makes my blood boil. You should see the steam coming out of my ears! 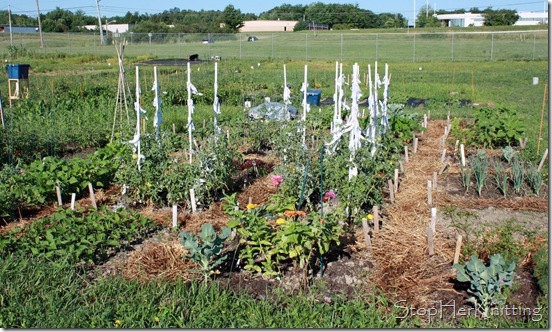 So after all of the path weeding was done I took a bit of time to spread our last half bale of straw down on the paths so that everything looks nice and neat and the weeds are choked to death in an agony of darkness.

Sorry about that, I got carried away.

And after I was done I went to clean up the square where we store our watering cans and extra compost and the just used bale of straw. And there I saw some newspaper that was left over from early spring when we laid out the beds.

I will just throw this out.

So I picked it up, turned to the right to exit the plot….. 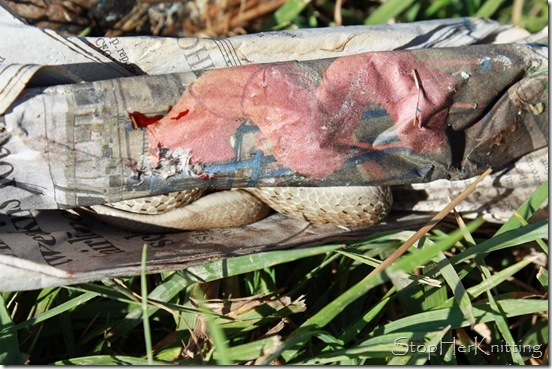 Take a look at the picture. This is the newspaper. Does something look wrong to you?

Take a closer look. Right about the time I had taken two steps something within the folds of the newspaper moved ever so slightly. Adjusting itself.

I froze in horror.

And I said an extremely bad word that I cannot repeat here lest the FCC shut me down.

And then I carefully walked into the grass and set the newspaper down and went for my camera…..and my hoe. 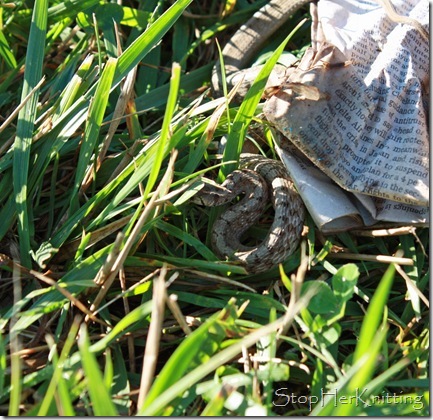 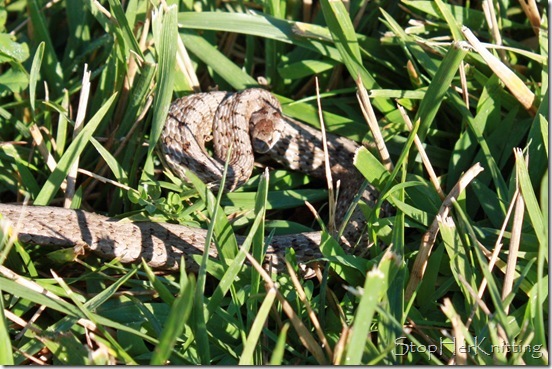 It got old after a while. So I took the hoe and helped him into someone else’s garden.

Aren’t I a nice garden friend.

And then I went home and sat in a nice quiet chair for a while and recovered.

Snakes. Why did it have to be snakes?