The Magic of the Garden

I love my back garden. I might have mentioned that before but good things should always be mentioned more than once.

It is sort of a magical place that brings me peace and joy and weeds.

But we will not speak of weeds. I weeded today and so they are mostly gone.

What I wanted to show you before the thought of weeds so rudely interrupted was what I found in the garden today. I never know what I am going to see as I work back there. There is a toad that lives under the garlic chives by the bird bath. Several years ago there was a hummingbird nest in the clematis.

But the thing that always tickles me are the plants that self seed. And they are plants that you might not expect to do so.

Oh there are the darn garlic chives that I let go to flower/seed several years ago. I was an idiot. Now they are everywhere and I pull them up like weeds.

But we will not speak of garlic chives at the moment. 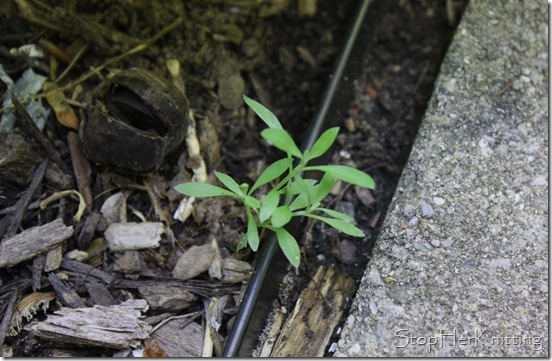 Alyssum happily coming up. I have this stuff self seed every year. You never know where it might show up. In fact I don’t think I even planted any Alyssum last year. It came up on it’s own and self-seeded again for this year.

The only problem is you really have to know what this plant looks like when it germinates and has only two leaves. Otherwise you pull it up with the rest of the weeds. And then dope slap yourself after you realize what you have done.

Not that I would know anything about that mind you. 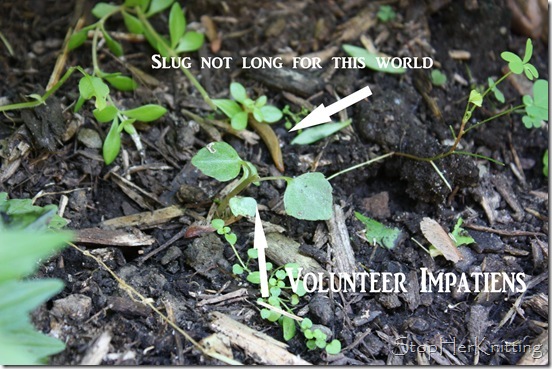 And then there are the Impatiens that seem to come up every year on their own. They don’t get all that big because they seem to come up fairly late in the season but I look for them and baby them along.

But the plant that amazes me with it’s ability to self sow, not a lot but at least 3 to 4 babies every year is….. 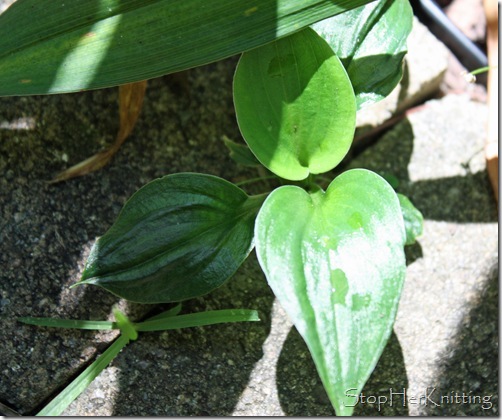 Hosta. And they come up in some amazing places but usually in between the paving stones in the walk ways. I saw this little fellow earlier in the year but left him for a bit. I will move him in the Fall to some more hospitable place. But to move him I must deconstruct part of the walk way, removing temporarily two of the pavers.

I just don’t feel like doing it right now. He seems happy where he is.

I just want to sit in the back and have a glass of wine and read a book and soak up the peace and quiet that is the back garden. 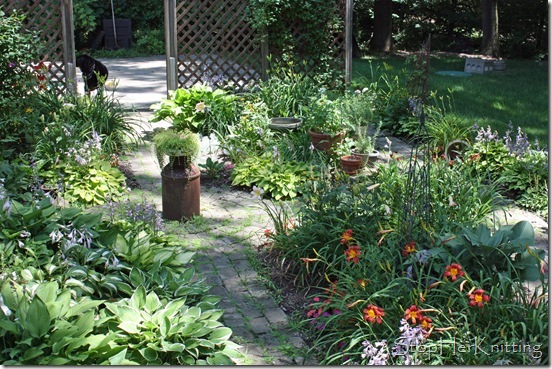 Oh and this picture doesn’t show it all that well but I have TONS of day lily blooms.