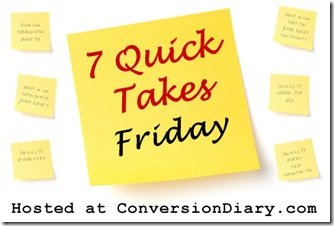 Here we are again, gathered around the computer and catching up on the little things of the week. And as usual I am writing this on Friday because I have forgotten to work on it during the week.

Hi, my name is Debbie and I am a procrastinator.

So, after you have zipped through my inane blather be sure to go over to Conversion Diary and read about all the much weightier and pithy things that others have been doing.

And now for the blather……

1.
Mark this down as one of the dumber things I have read about as far as food is concerned….

Oh for the love of Peter, Paul and Mary!

Just brew yourself a cup of coffee and pop your own popcorn. Cheaper that is for sure.

At least that is what I do.

I am not huffing and puffing quite so badly on small hills. And I am pushing myself as much as I can, which sometimes doesn’t feel like all that much.

With the addition of today’s ride (15 miles) I have clocked 39.75 miles this week on the bike (that is last Saturday to today). And I have biked a total of 119.5 miles so far. Not nearly enough yet.

AND I am actually anticipating, with happiness sometimes, my daily rides. And I think that is probably the biggest stride I have made since I took on this little “challenge”.

3.
We had to run the A/C for two whole days this week. Oh the horror!! It was 93F on Wednesday and it didn’t cool down past 74F overnight so, heck yeah, I am going to turn the cooler on.

HHBL doesn’t like A/C. He likes it hot hot hot.

Not so much. Oh I don’t like A/C and I would much prefer to have the windows open than to have the house closed up. But, if it is too warm at night and we can’t get the house cooled down…..

Then I need the A/C. And I am glad that it is available.

Who wouldn’t love a movie that has giant ants who have mutated because of atomic testing and then go on to make a nest in the sewers under LA. Oh my word I love that movie. Giant mechanical ants menacing women and children.

I used to spend Saturday afternoons watching Sci Fi movies on the TV when I was younger. One of the Chicago stations would show Sci Fi movies all afternoon and I would stand there and do the ironing and watch to my hearts content.

That was when pillow cases still needed to be ironed. And handkerchiefs. Or at least that is what Mimi told me. But I guess it could have just been a excuse to give me something to do. Hmmmmmmmmmmmm.

Another great movie is Day of the Triffids which actually has Howard Keel in it.

And there is the movie that I have never learned the name of but has stuck with me all these years. Something “bad” lands in the swamp outside of town but people don’t know it. But people who venture out of town keep showing back up later with a bandaid on the back of their neck and a different personality. If anyone knows the name of this movie please let me know.

Oh and then there is the movie about the giant spiders that are killing and eating people.

I may have to go on a Sci Fi film kick this summer.

5.
Oh, and regarding my ongoing battle with finding a little bike bag to put my cell phone and house key in…..

Returned bag #1 and bought a bag that attached to the frame and thought that was going to work. But I found this morning that when I pedaled the bike my right knee would scrap up against the bag. And that was just too plain annoying.

So it goes back to Wally Mart on Monday and I am just going to go with another solution.

6.
On the gardening front we are making progress. Some peas are in and sprouting. Lettuce is coming up. Basil is in and happy. Beets are sprouting. The tomatoes look happy. We have planted our first bean seeds. The beds for the zucchini are ready as is the bed for the sun flowers. We are still amending and weeding out some of the beds that we just hadn’t gotten to…..but are making progress on that too.

But doggonit do people not read the rules for the garden? Apparently not because some guy had driven his mini van all the way into the garden to the end. Now right now it isn’t all that wet but I can tell you that after even a modicum of rain he will make the already existing ruts even worse. I took a picture of he and his van. Now the question is should I be an Upthight McTighterson and send the picture and complaints to the guy that runs the garden. Maybe. I have calmed down a bit and am rethinking whether I will or not.

After the ride today I did two hours of intensive gardening and I am just pooped. I left LookLeap in the garden hoeing away but I would bet she has had to stop because the minute that I got home the heavens opened and I only live a 10 minute drive from the garden plot.

Good timing on my part I think

7.
I cannot believe that I am going to say this but….

Thank you Dallas Mavericks (a team that I normally do not like). Please win one more and do it in a decisive fashion. That would make me fairly happy and I think…..

There are many fans in Cleveland who would be extremely and supremely happy.