You didn’t really believe that last one did you? I mean we have had rain, rain, rain and it is supposed to rain all week. And then there is that snow issue.

OK, so one of the places that I love the most around here is The Westside Market….over on the West side. Did you know that Cleveland has very distinct East side and West side? Well we do. And so that means that The Westside Market is over there. On the west side. Not the east side where I reside.

This is the most fabulously cool place. And I should probably warn you now that I might be using the word “fabulous” more than once in this post. I seemed to say it a lot on Saturday morning when HHBL and I spent a pleasant hour wandering the aisles and sampling. And taking pictures. And being parted from our money.

Parted willingly, in cash, without a receipt in site.

We started off in the Fruits and Veggies building….

Why is this picture so long and skinny you are asking yourself. No, I wasn’t going for a landscape sort of effect although it is kind of cool. It is because this is what the original picture looked like…. 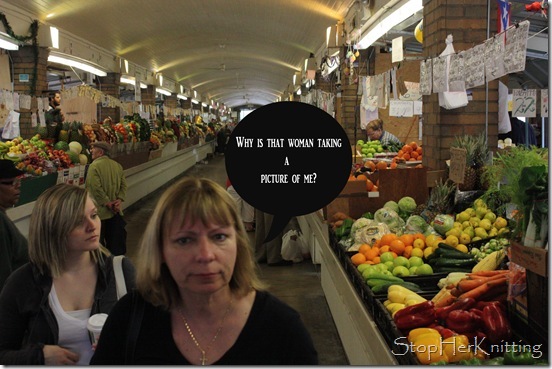 Now back to our story. I am telling you I could have just hung around in this place for a bunch of years. I didn’t see any produce that didn’t look fabulous. And it was hard to make a decision as to what I wanted to get. That is until I saw….. Asparagus. And not just any Asparagus. This stuff was skinny and brand spanking new and tender and just screamed that it needed to come home with us. So I bought a bunch of it. And the guy also had some decent looking green beans so I bought a pound of those. And then there were the two bags of baby spinach that I also purchased.

And then, when I thought I was done there, the fellow skillfully turned my eyes towards the mushrooms… 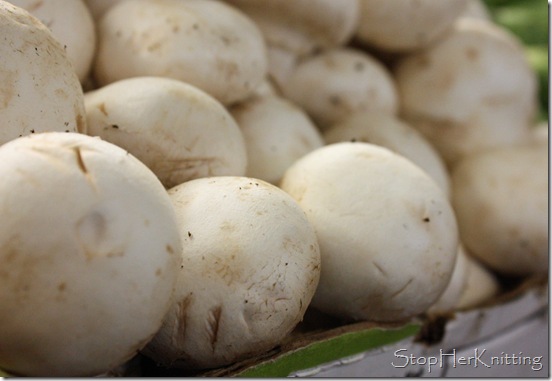 And then skillfully “up sold” me a pound. They were paid for and in the bag before I knew what hit me. But I love mushrooms. I am secretly a Hobbit. 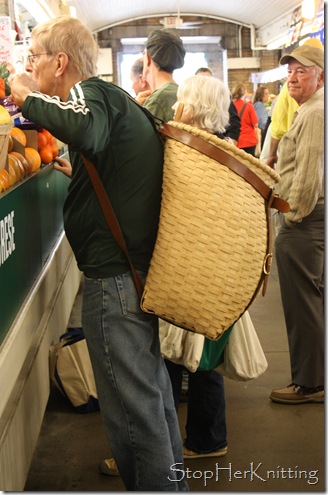 What is this Lou Holtz look alike going to fill this basket with? And how is he going to even put his purchases in that thing.? Does he buy stuff and then just throw it over his shoulder and hope that he makes the basket? Or does he take the basket off his shoulders every time and put his produce loving into it’s recesses. And really, why does he even have a basket the size of Outer Mongolia on his back. The mind boggles.

After we finally extricated ourselves from the fresh produce it was on to the “main” building where you can find all manner of meat, fish, cheese, coffee, candy, ethnic foods, bread, tea…the list of stuff is amazing. 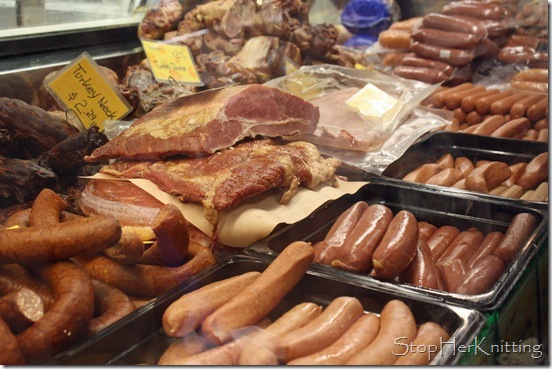 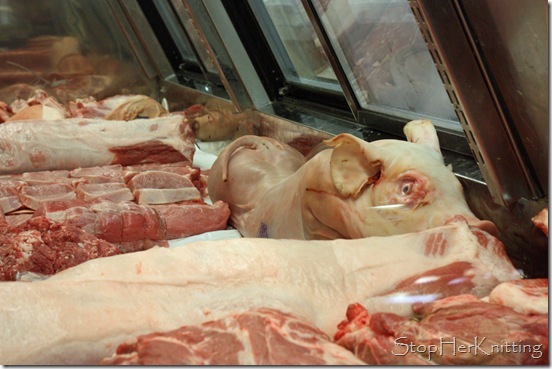 Hey you know, I bet we could dig a pit in the back yard and roast that pig! What do you think? 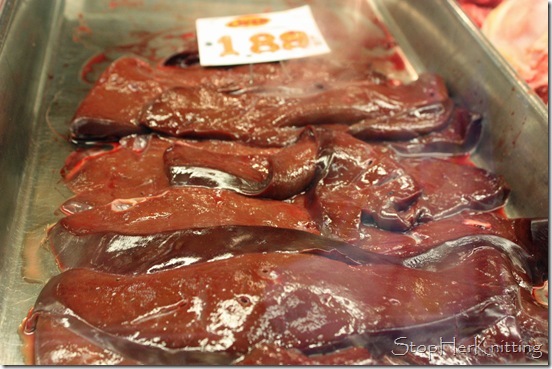 Liver! A tool of Satan if there ever was one. We quickly moved on. 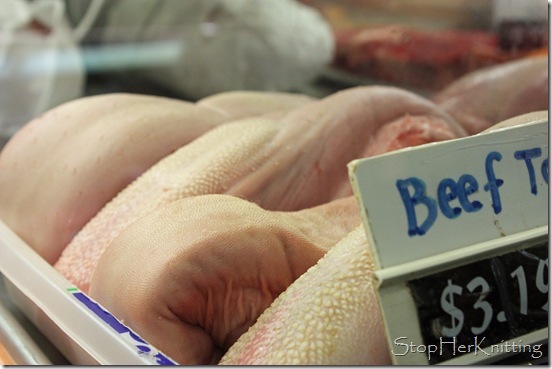 And we didn’t buy any Beef tongue either. HHBL had a traumatic experience with beef tongue when we were first married. Auntie Jane cooked it for Sunday lunch and then slipped it past him by disguising it with BBQ sauce. And besides you have to peel it after cooking it and I just think not. 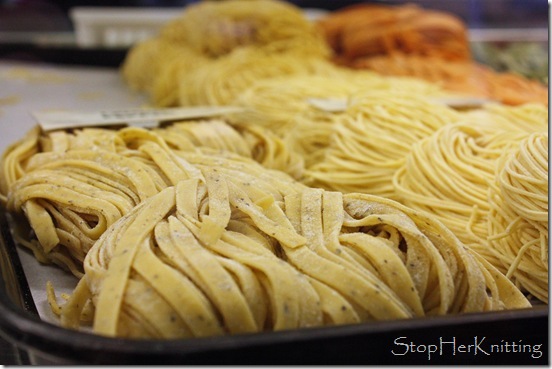 See that fettuccini right there. That is Lemon Pepper Fettuccini and we bought it for dinner. And it was fabulous (there is that word again). I cooked up some of the asparagus and mushrooms and added some shrimp, a bit of butter, some white wine and a touch of heavy cream. Oh momma. There is nothing like fresh Ohio City Pasta. We also bought some of the Angel Hair pasta for another time. 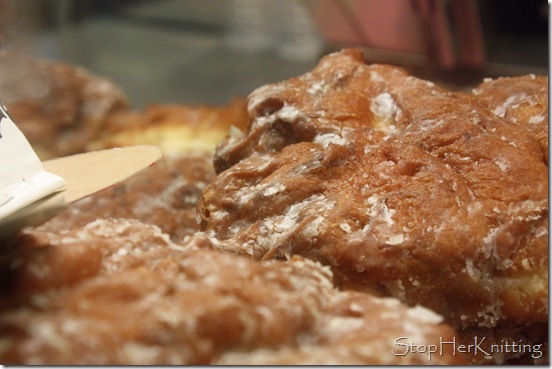 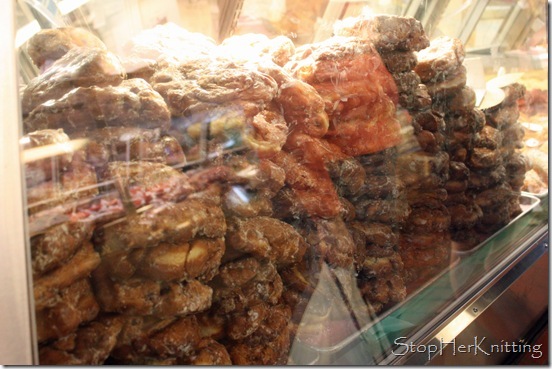 Mother of All That’s Holy! We found Fritter Mountain.

I cannot tell you how good these things looked and smelled. It is amazing to me that we didn’t buy any……but we will next time. I will not be denied. 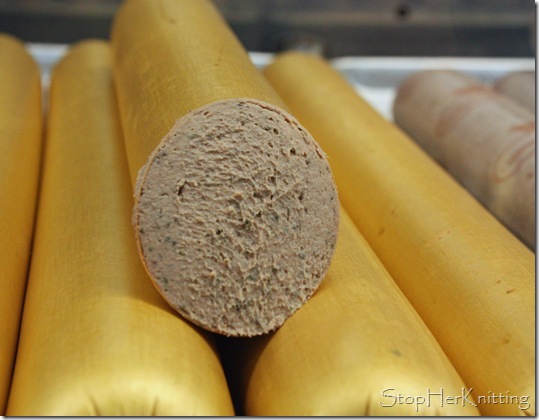 Oh be still my fast hardening arteries. Veal liverwurst with herbs. This stuff was…..FABULOUS. He gave me several “tastes” of different “wursts” and this is the one that I chose to take home with me. And then lunch was Veal Liverwurst with herbs on homemade bread with mayo and homemade sweet pickles. Sweet Mother of Life it was good! 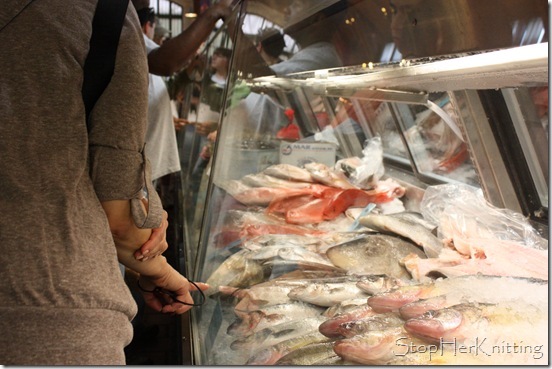 We wandered some more and briefly thought about buying some fish but we had other errands to run and so didn’t think we wanted to have the fish sitting in the car. And darn it, the Halibut was $18.99/lb here too. I paid that price last week but I just can’t do it every week. So I walked away with a heavy heart…and heavy bags.

We continued to wander here and there looking at the cheese and meats and poultry, wishing that it was late enough in the day that the gyros place was open.

And then HHBL said…

Sure enough there is a place that sells popcorn. With free samples 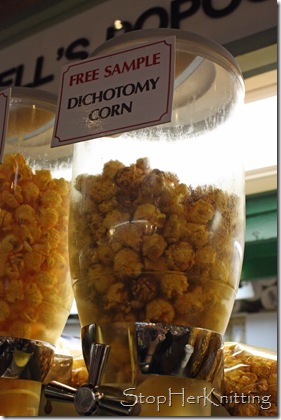 The Dichotomy Corn is…..FABULOUS. It is a mixture of Carmel popcorn and cheddar cheese popcorn. We bought a bag. We finished it in 24 hours. I want more. 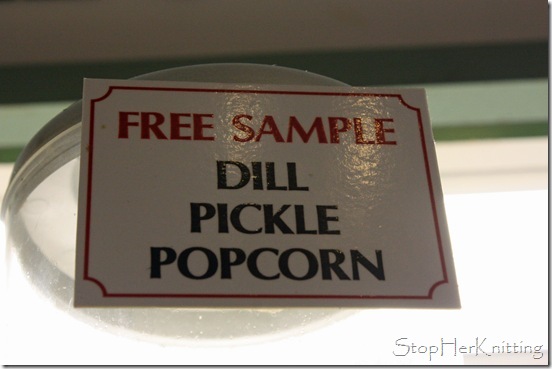 This was not as good an idea as I had hoped. Not good at all as a matter of fact. Sad. I had such high hopes for it. So we moved on.

We bought some of these…. 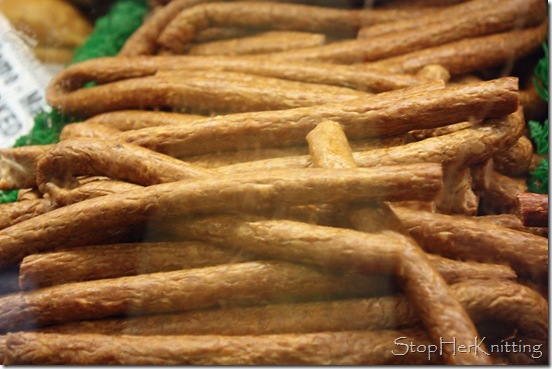 And then there was the loaf of bread….. 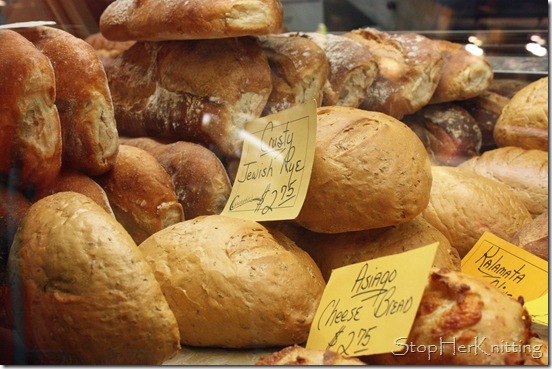 And there was also the 1/2 pound of freshly roasted coffee that we also purchased. I have no picture of that because I was busy drinking coffee at the time. You will have to trust me when I say that the coffee beans……FABULOUS.

And finally, when it looked like we were done and were making our way out of the building I looked up and saw people up on this little balcony and at that moment it became my mission in life to find the stairway so that we could go up there for a bit. I would not be denied.

I will show you what I saw. 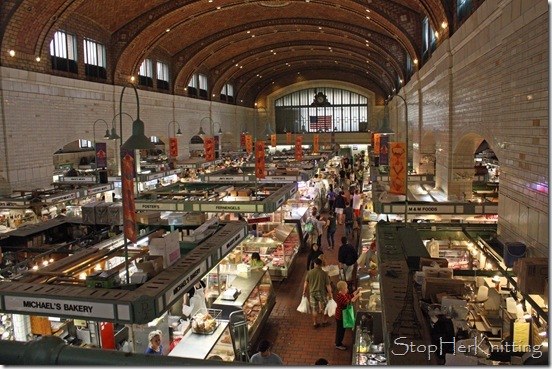 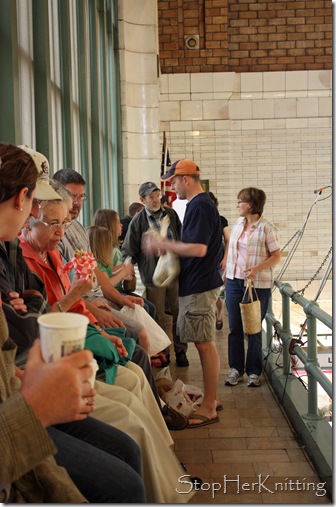 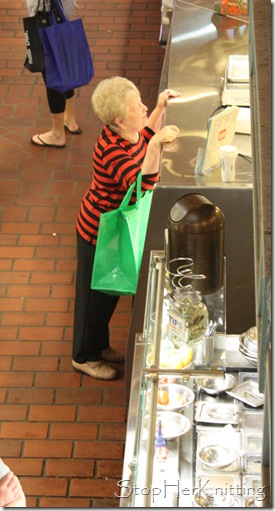 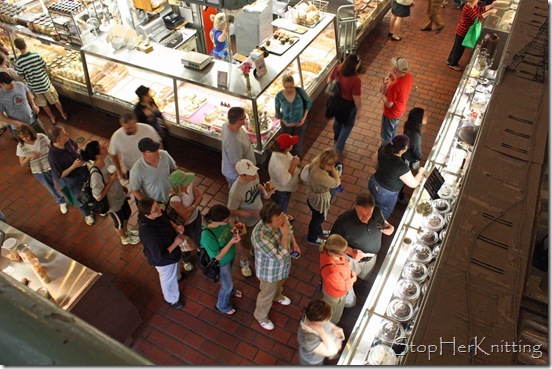 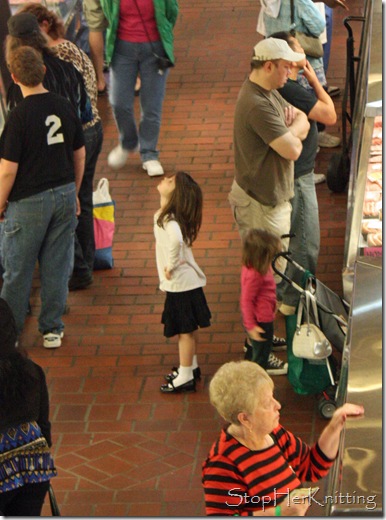 And then, FINALLY, we were done and decided that it was time to go home. 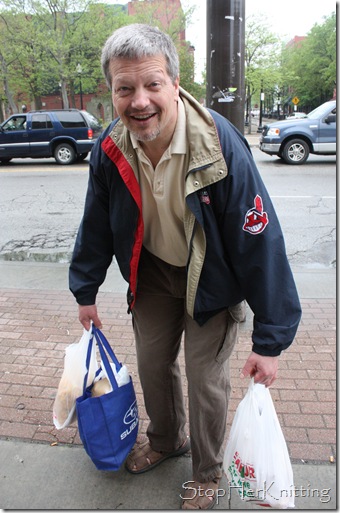 So my pack mule HHBL and I made our way back to the car, in the rain, stowed our purchases in the back of Coco the Subaru and made our way home, with one other stop that I will tell you about at another time. 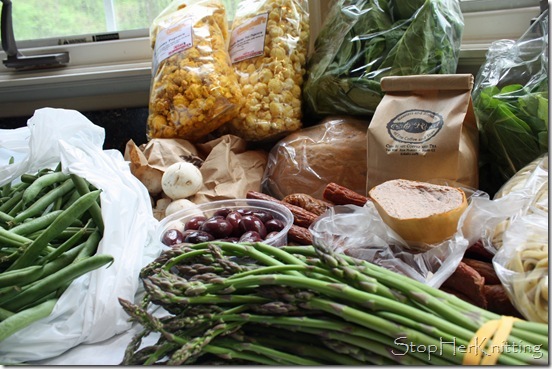 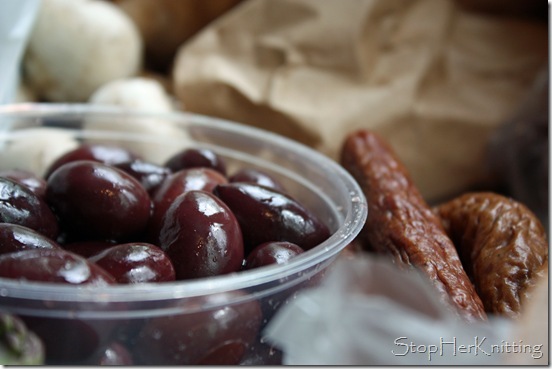 Email ThisBlogThis!Share to TwitterShare to FacebookShare to Pinterest
Labels: Cleveland