The Moon Is Full

I am up early in the mornings. If you have hung around here for a bit then you might have guessed that. 5:30a-7a is the absolute best time of the day. If I had my way I would decree that all stores would be open this early so that I could get my errands done.

I have suggested it but no one seems to be listening.

At any rate, I was sitting at my desk this morning. It was dark outside. And I looked out my window…….

And saw the full moon, misted and shrouded by whispy clouds.

Wow, that is so cool. I wish that I could take a picture of it but there would be too much camera shake and it would be blurry.

And then I dope slapped myself and said….Tripod you dummy! 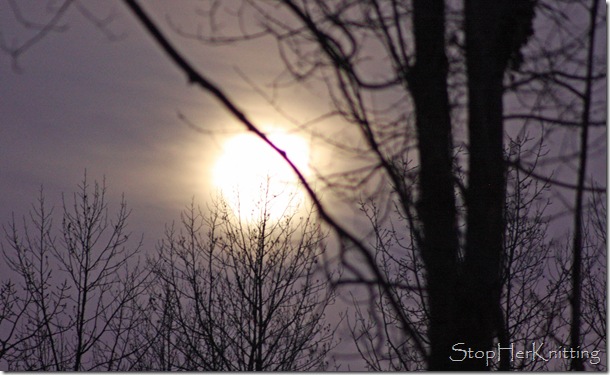 I grabbed the camera and the tripod, put on the telephoto lens, turned off all the lights in my office and opened the window.

Um, it was really cold outside let me tell you.

I had enough time to set the timer and the ISO and to shoot three pictures before the clouds slowly closed in and covered the moon up.

Why did I shoot it on the timer? Because, even when on the tripod it was getting a bit of “noise” when I would hit the shutter release. The timer worked great.

I fully expected to hear the coyotes howling in the woods.