Continuing in the same vein as yesterday. You know, the whole opening boxes and finding things and stuff.

When I was looking for My Sailor Hat to photograph for Monday’s post I was digging around in my “memories” box and came upon another blast from the past. Not my childhood but the progeny’s collective childhood.

Around Chez Knit, many a year ago, we were really into Barbies.

At one time it was difficult to walk without stepping on a piece of Barbie paraphernalia, or a semi naked Barbie for that matter. Or a Ken with only one leg.

Just as an aside, why did our Ken dolls always lose a leg? Every single one of them was disabled. It was sad.

We have three girls. All those girls had Barbies. Tons of Barbies. And you just can’t clothe all the Barbies in store bought outfits and still have enough left over at the end of the week to feed the family.

And I have a sewing machine and I know how to use it. In fact, sewing was my outlet at that time. It was either sew when they were napping or…….

Well lets just say that I understood why gerbils eat their young.

Move forward to present time. I am digging through my box and I spot something down at the bottom. 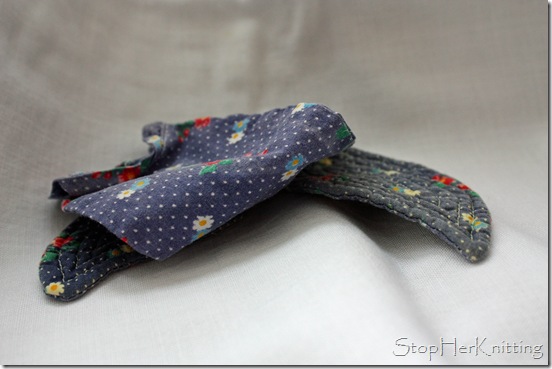 When I picked it up I started to hear the soundtrack from “The Little Mermaid” run through my head. 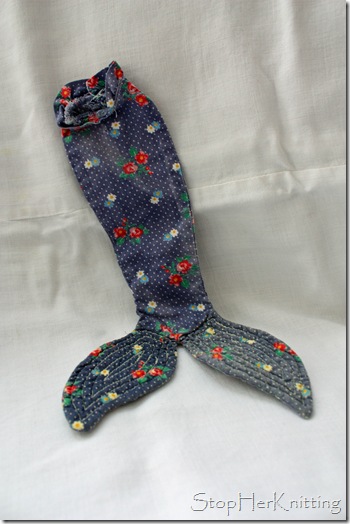 There it was, the last surviving “Mermaid tail” that I had produced for all the progeny. I think there had to be at least 3 of them at one point in time because heaven forbid that you weren’t “fair” and gave one to each of them. 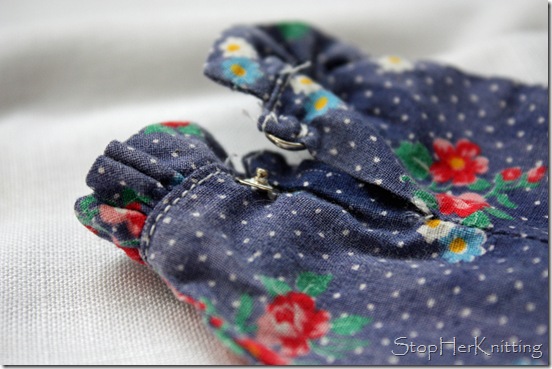 I did a pretty darn good job with these if I do say so myself. It was my own design. Did they even make patterns for mermaid fins? If they did I still wouldn’t have spent the money on it. These actually did spend a great deal of time on Barbies in the water. The wading pool. The bathtub. The occasional bucket of water. 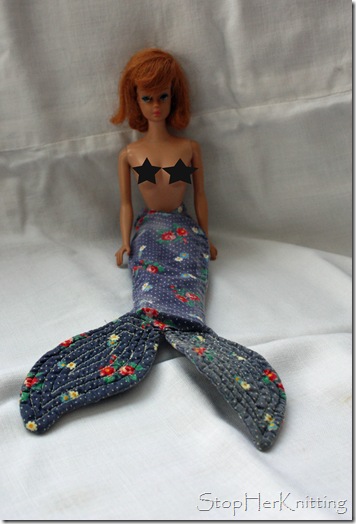 Here is Barbie in all her Mermaid glory. I did a bit of editing on this particular photo because, as was usual around Chez Knit back in the days of Barbie…..she didn’t have enough clothes on.