What are your favorite decorations for Christmas? Last year I told you about the plethora of ornaments that are my favorite.

But by far my favorite Christmas decoration is my china Nativity. It isn’t Christmas until I have put it up.

It isn’t the only Nativity scene I happen to own. I have some from Peru, Israel, Egypt, Mexico, Africa, Germany, Toledo. At last count I have

That isn’t too many is it?

But every year I get out my favorite one. 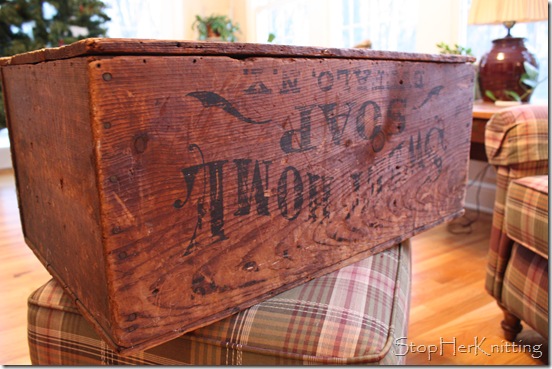 I go down to the basement and I bring up this box. It is just an old soap box. In fact I am not sure how old it actually is. The nativity came to me in this box and I will explain why in just a second so don’t be so anxious about it.

I open up the box, yes I know that the box is upside down but that is the way that it is. The top is on the bottom. Just like me to have something that is upside down.

Where was I? Oh yes, I open the box up and the first thing that I do is I take a giant deep breath, filling my nose with the smell from the box.

Why you might ask? Because the inside of that box smells like my Grandma Amsler’s house. You see, before the nativity came to me it dwelt for a time with Mimi. But it came first from Grandma A. This year was especially poignant because Grandma went home to the Lord in February.

The box used to be her toy chest when she was little. She told me once that it was covered at one point with green canvas. 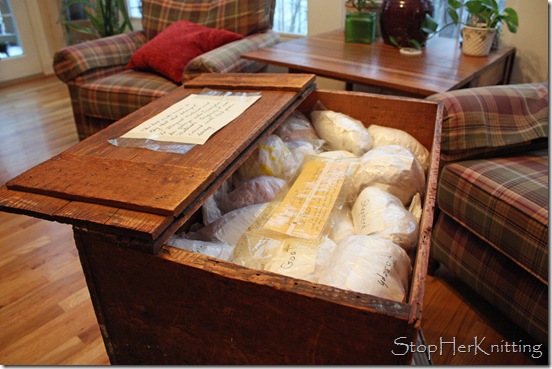 Inside of the box is treasure. Grandma very kindly wrote out where the box came from and where the nativity came from. She then taped them to the inside lid. 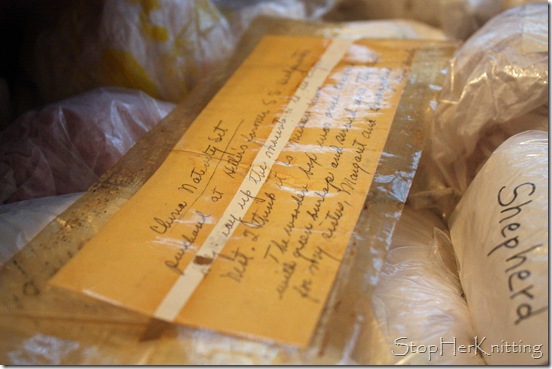 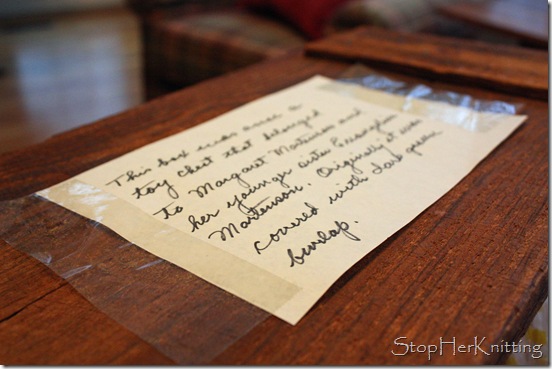 I love the notes because they are in Grandma’s handwriting.

The nativity itself was purchased around 1970 in Germany on a trip that my grandparents had long anticipated and planned. They were visiting my Aunt Kathy who was serving in the military and stationed in Germany. Grandma bought it at Berchtesgaden, Hitler’s mountain retreat, and carried it home on the plane.

Just as an aside, Berchtesgaden is a really neat place to visit if you every have the chance. I’m just sayin’.

At any rate. I open up the box. I take the time to look at my grandmother’s handwriting and remember her. And then I contemplate all the mummified remains that I have to unwrap. Really, they sort of look like something that I dug out of King Tut’s tomb, only with a bit more plastic than he might have had.

The tags for each of the pieces are also in Grandma’s hand writing although the wrappings inside have changed over the years. 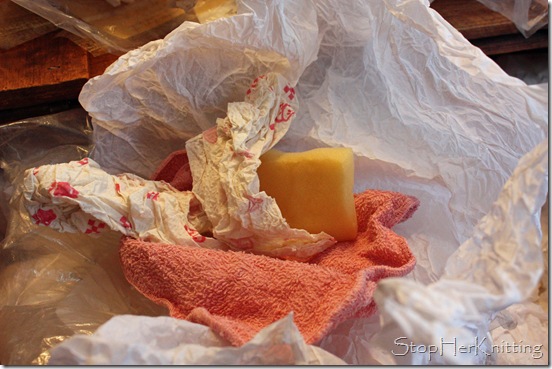 No one ever said that we weren’t inventive in our wrappings. Yes that is a wash cloth. Several years ago the tissue paper and paper cloths that the pieces were wrapped in sort of disintegrated and I needed something to wrap stuff up in. I had just bought a big bunch of cheapy washcloths for something else. Voila!

I take the time to unwrap and inspect each of the pieces. Some of them have had little “mishaps” over the years though not on my watch. 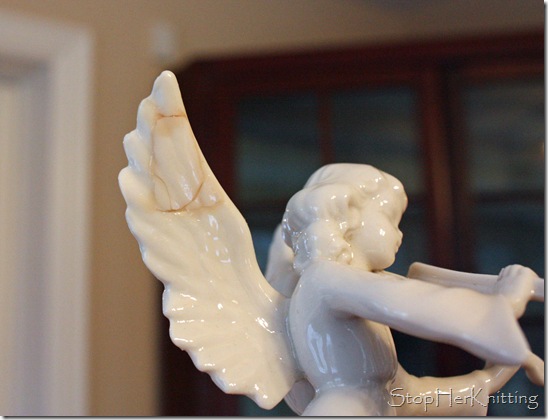 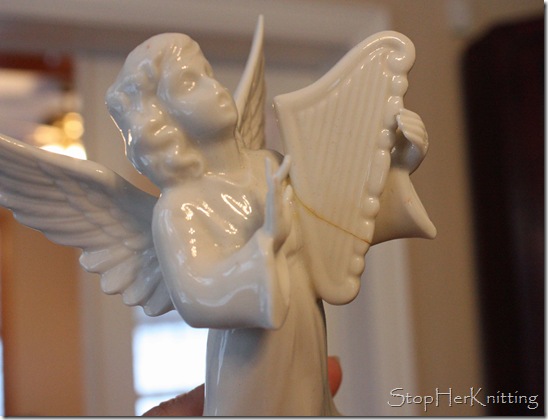 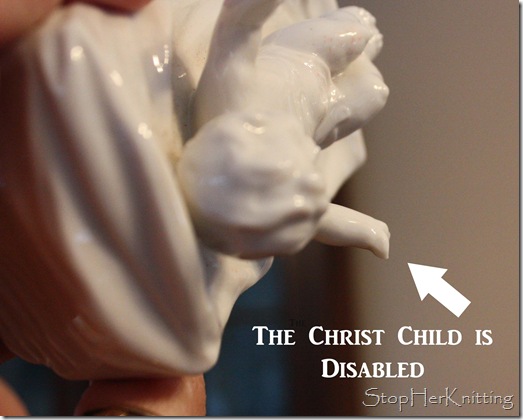 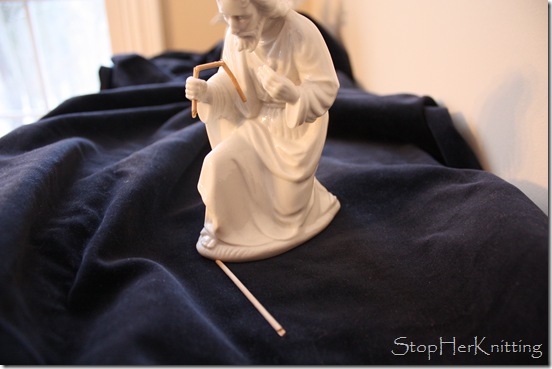 I will admit that Joseph’s broken staff might have been during my tenure as Nativity keeper.

It is amazing that all the pieces aren’t smashed to smithereens because several years ago, when I was taking the box back to the basement after Christmas, I caught my slipper on the step going down. You know that moment when you know something really bad is going to happen and there is nothing that you can do to stop it.

Yup, I was right there, precious box in hand and still three steps up from the floor. I had a choice to make. I could drop the box, grab the railing and save myself.

Or I could hold onto the box and go down like the Hindenburg.

I chose the later. The Nativity was saved…..but the ligaments in my left ankle were not.

But the Nativity was saved.

After everything is unwrapped and inspected then I have to set the proper placement of the pieces. That involves things like a string of lights, a piece of navy blue velvet. And these…. 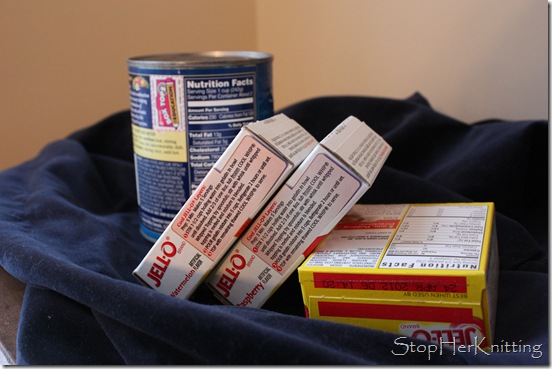 Well the angels have to stand on something don’t they?

Didn’t I have another camel?

Finally everything is set. 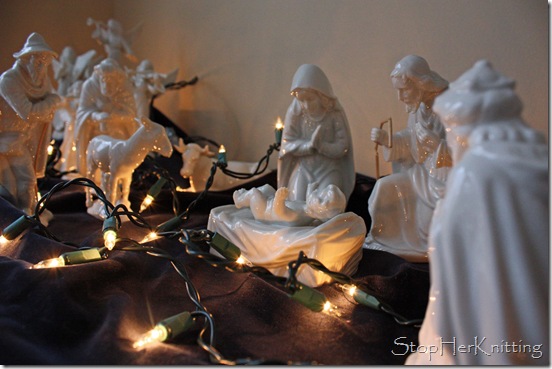 I think I need a cup of Elixir, a piece of Christmas Candy Crack and some peace and quiet.

Email ThisBlogThis!Share to TwitterShare to FacebookShare to Pinterest
Labels: Holidays, Things that make me happy