A Nice Way to Spend an Evening

Ah summer how I love you.

Well, I am not to happy with you today because it is hotter than heck around here at the moment and that means air conditioning and I really hate A/C. I am odd that way.

But one of the things that I love best about summer, besides BLTs of course, is baseball.

I might have mentioned my love of baseball before. Maybe here…..

So Friday night HHBL and I wandered down to The Jake, OK OK Progressive Field to see the Indians inevitably lose play. The daughter of some friends was singing the National Anthem and the weather was beautiful and it seemed like just the right thing to do to start the holiday weekend. 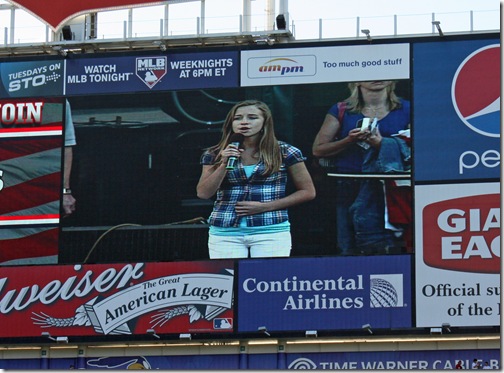 Tori did an awesome job singing the National Anthem. You can bet your bottom dollar I wouldn’t have done as well. And I don’t think that the Indians are going to be calling me any time soon.

HHBL and I decided that we were going to sit in the bleacher seats for this game. We have been attending games at the stadium since it opened in 1994. We have sat in just about every portion of the stadium at one time or another, except the bleachers. 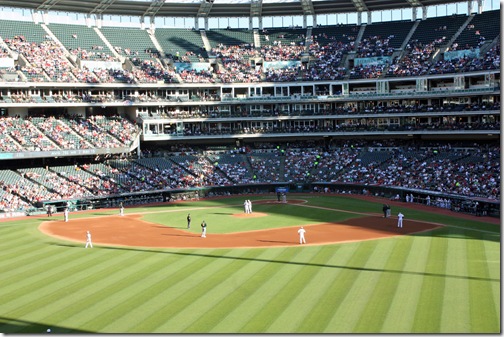 Not bad for bleachers. The thing that was always nice when we had season tickets was you got to know the people that sat around you. For many years we had seats in the upper deck, sort of in the left upper corner of this picture. 20 games which was more than enough. And the same people were always sitting around us. There was the father and son team who always brought deli sandwiches with them. And then there was the husband and wife who sat in front of us and always had a huge bag of peanuts in the shell. They spent the whole game eating peanuts. But in recent years we have decided that 20 games are just too many for us to attend, 3-5 games a season is the perfect number. This would be game #2 for us this season.

So we purchased our tickets at the ballpark, indulging in the “pre-loaded” tickets which means that you pay $8 extra and they load $10 on your tickets for food. Great marketing strategy that makes you think that you have gotten a good deal. It would be a good deal if they weren’t charging $9 for their “premium superdooper bratwurst”. I might have added the “superdooper” to that description. But I wasn’t joking about the cost. Just because someone in a white chef’s coat cooked the thing doesn’t make it worth the arm and leg that they charged me. 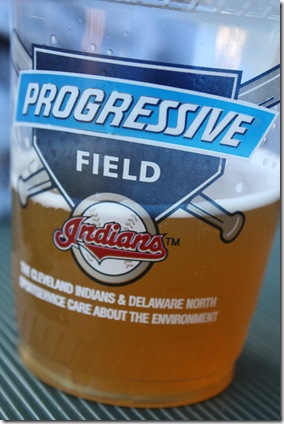 I got over it with a good beer. If only I could remember the name of it. It was very much like Blue Moon. Really, life is just too short to drink bad beer. 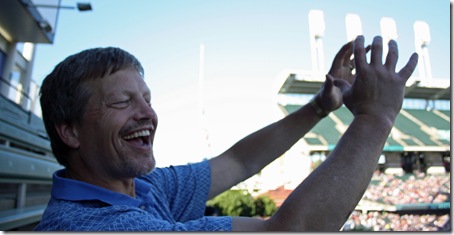 HHBL was hoping to catch some spectacularly hit ball……but that didn’t happen. The only ball that came our way was thrown up into the stands by the outfielder. It sailed right up to where HHBL was sitting……or where he would have been sitting…..if he hadn’t been someplace else getting something to eat. So the kid that was sitting next to us had the good fortune to catch the ball.

But I almost took it away from him later because he kept taping it against the metal seats and he was driving me bonkers. 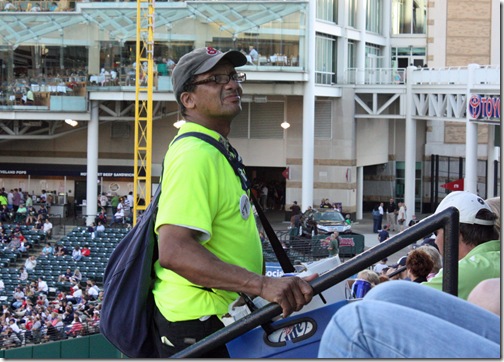 This is “The Beer Man”. Everyone who goes to games regularly knows him. You can hear him all over the ballpark with line, “It’s not the Tax Man! It’s the Beer Man!” He has been selling beer as long as we have been going to the ballpark. It really wouldn’t be quite the same experience if we didn’t see him. 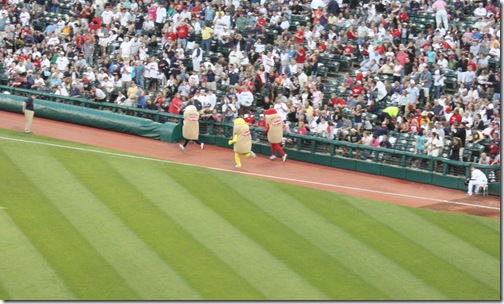 Ah yes, usually around the 5th inning Ketchup, Mustard and Onions run their “race”. Ketchup always cheats and Mustard usually wins. I am not sure what purpose this serves but I always root for Onion.

And then I got bored.

And I am so sorry.

We have been to some games that were absolutely electric with everyone on their feet and yelling almost the entire game.

This was not one of those games. Usually I keep myself in the game by scoring. But I didn’t do that this night and so my little gray cells started to wander down highways and byways.

And I had my camera with me…. 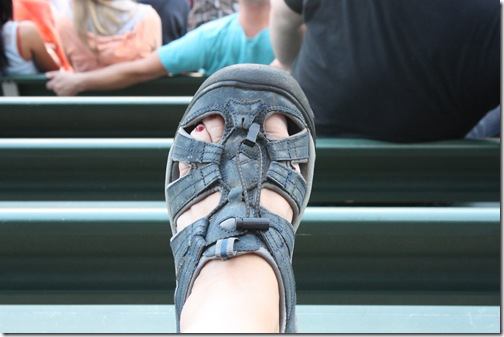 You know it’s bad when I start taking pictures of my feet. Cuz my feet aren’t the most beautiful things in the world, especially in my traveling and tramping shoes.

If I had had the chance I would have taken a picture of the young fellow walking up the bleacher stairs with the ultimate “Refrigerator Repairman Pants”. Not only did we get a particularly clear look at his boxers we all got a particularly spectacular view of most of his buttocks. A tad drafty there son?

And finally we decided that we had had enough and left after the 8th inning and drove home, stopping on the way to get ice cream at Mitchells.

We needed something to help us get over the pathetic and lack luster performance of the Indians.
Posted by Debbie at 4:24 PM