The Paint Fumes Have Pickled My Brains

I get up in the morning and review the list of things that need to be done that day…..

I re-write the list of things that need to be accomplished today and tomorrow and this week and…..you get the picture.

Life is upheaval around here. I overslept by an hour this morning! Yeah Deb but that means that you got up at 6a rather than 5a, what’s the big deal. It is still too dark o’clock early for sane people. Well, I like 5a and when I get up an hour late it puts me behind an hour.

The counter tops will be done today, post on that coming next week. I want to extol the virtues of my “counter top ladies” so they get their own post.

What do you do when you need to cook and feed your hubby and you don’t have use of the kitchen? 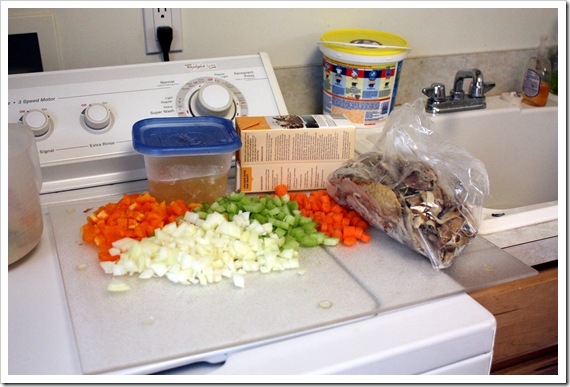 Why you do your cooking in the laundry room of course. The washing machine makes a fairly good counter top if you need it. Adaptability thou art my middle name. Turkey soup is on the menu for tonight. I have to say that I am not really sure how old that package of turkey is. It was in the freezer but there is no date on it so…….into the soup it goes.

Also today the painting guys, Kevin and Dewie, start on a bunch of walls. A LOT of walls. 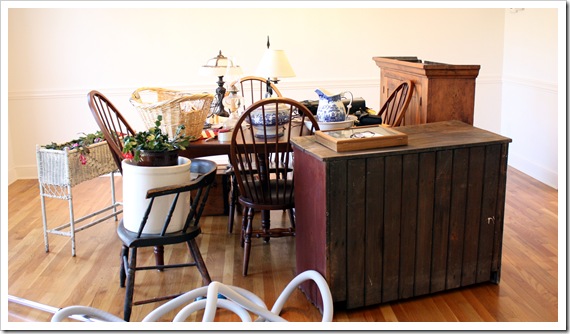 Chaos reigns in the dining room which is also box packing central. Everything is pushed into the center of the room so that they can get to the walls. Stuff is packed. This is sort of what the family room and sun room look like too as well as Dan’s office and at least two bedrooms. Like there was a giant black hole that opened up in the middle of the room and sucked everything to the center.

I have been watching too much Star Trek. 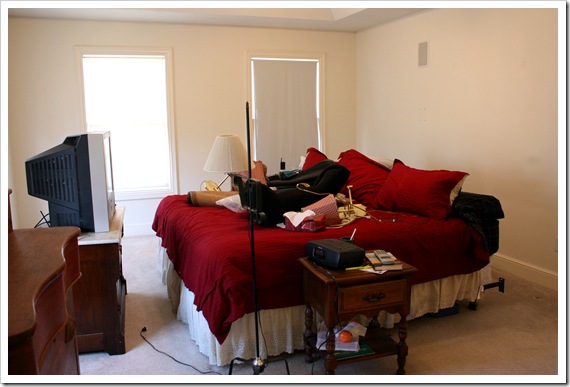 Chaos reigns in my bedroom too. You see, I didn’t discuss with Kevin which rooms we would be doing first. Usually I like to have all my ducks in a row for these kinds of things. I like to know what my day is going to be like. I like to know the flow of things.

I JUST NEED TO KNOW

But I forgot to ask until this morning when they were standing in my front hall.

Debbie: Um, Kevin, where do you think you will be starting?

Kevin: Dewie I think you can start upstairs and work your way down. Does that work for you Deb? That way we can get the bedroom done and you can sleep in there tonight.

Debbie: Oh yes Kevin, that is fine with me. I will just go and move that furniture and make sure that everything is ready

And all the time I am thinking, Crap, crap, crap (sorry for that), I didn’t think they would start there and I am not ready there and this just isn’t how I planned out my day.

Tug, tug, tug. Grunt, grunt, grunt. I finally get it to move…and one of the casters promptly comes out of the frame. Which means that I have to lift the king size mattress up to get it back in. Finally mission accomplished on that although my back was saying nasty things to me.

Then it is quick into the bathroom to take all the stuff of the counters….

And that is when my day really went off the rails.

Remember this particular post when my ridiculousness came to full attention? Yes, well it happened again.

Take the stuff off the counter and stuff it underneath the sinks, along with all the other stuff that always gets put under the sinks and promptly forgotten about. But then, I have to clean the counters because, you know, they are going to be in the bathroom and they might be grossed out because the counters aren’t as clean as could be today. 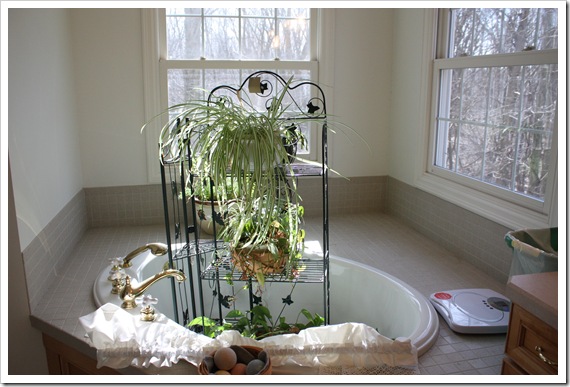 Then I had to move on to the tub area. I couldn’t just move the plants and vacuum around the tile. No, I had to give the plants a trim and refresh. And then I had to vacuum and scrub the tile because….you know the whole it might look dirty and reflect badly on my housekeeping skills thing. 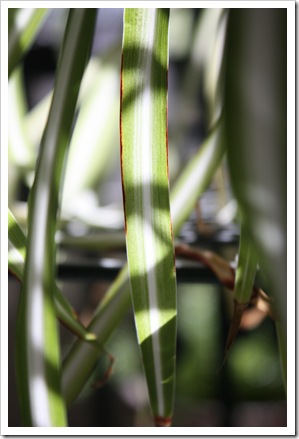 Then I had to stop and take some pictures of the pretty leaves on the spider plant. I spent way too much time doing this. But are you really surprised?

And then I got to this…. 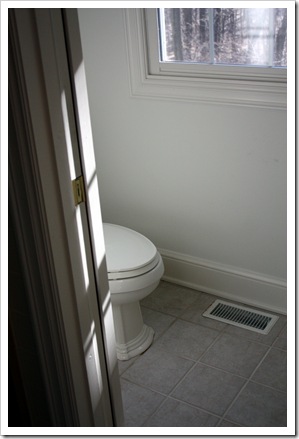 Take up the rug, move out the shelf, trim up the plants. All is good….

Then I realized that Dewie would be painting in here. And that he would have to get right down on the floor to get behind the toilet….and…and….and

And then I wished that I could have a glass of wine or three.

So I had more coffee….which might not have been a good idea either.

Man I can hardly wait for all this to be done.