One year ago today I was doing this. Yes, I was having a hysterectomy. Boy how time flies when you are having fun. I have been thinking about what the year has been like for me since that time and I have observed some things. This will probably be boring but….

It’s my blog and I’ll be boring if I want to.

Now, where was I? Oh yes, oneyearposthysterectomyobservations…….

1. Despite the removal of my ovaries and hence the removal of hormones I have not grown a mustache that rivals Burt Reynolds in the 1970’s. That is not to say that I don’t participate in the occasional use of Nair for the lip. But that predated the surgery. Are you grossed out yet?

2. Overall I have felt better this year then I have in many a past year. You honestly don’t know, sometimes, how bad you felt until you have fixed whatever the problem is. I had been so tired and worn down for so long with the anemia that it had just become normal. And the atrocious periods were just what happened every month. I was confined to the house. By 2008 I was even confined to travel in the US only. It was too difficult to be overseas with the thought that I might come upon “that time of the month” and be confined to a hotel room. I definitely couldn’t be traipsing around slums and the wilds of Africa.

3. Hot flashes are really…..hot. And not in an “Ooooo that’s really HOT” kind of way, like a teenager looking at Justin Bieber (HA, you didn’t think I would know who that is did you). No it’s more like “OOOOOOO I’m really HOT” like in Tucson in July kind of hot only with added dampness. But, they are manageable with Black Cohash.

4. I have always suffered from the occasional canker sore on my gums for as long as I can remember. Nothing major. But several years ago it seemed that they became incredibly severe, long lasting and continuous. Nothing that I did, or eliminated from my diet, seemed to really help. But what I didn’t know is that mouth ulcers are sometimes a symptom of severe anemia. Since the surgery, I still occasionally get a mouth sore or perhaps a small bunch of them but never as severely and never as big and they don’t last long.

5. I would experience, on an almost daily basis, heart palpitations. It would feel like my heart was doing back flips in my chest and then running fast. It was really scary at times. Again, it was a symptom of severe anemia evidently. Now, no more heart palpitations….unless of course I am gazing on HHBL in a suit. Hoo Boy, now that is a sight to give me a racing heart.

Oh yes, having HOT FLASH now. Palms sweating, face flushing. Remember this little ditty that I wrote to commemorate it. 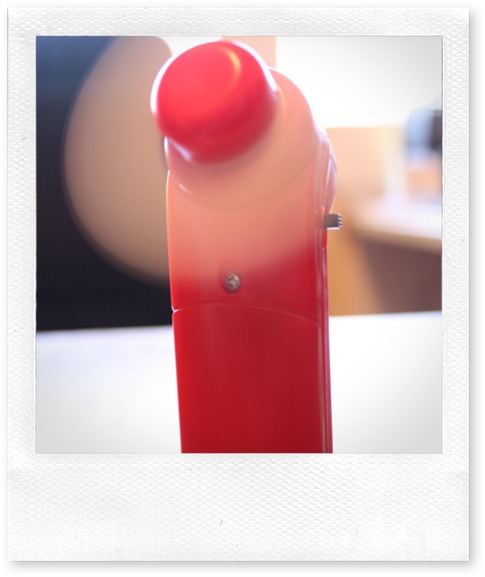 My knitting buddies gave me this niffty little item. I can see that it is going to get a lot of use in the days to come.

But one thing to remember with this highly sophisticated wind device. You should not use it too close to you if you have long hair…..