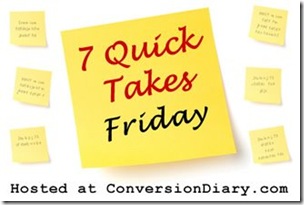 Lookee, Lookee. I have actually done 60 volumes of 7 Quick Takes. Can you believe it?? Remember to click on the picture to zip through the internet over to Conversion Diary and read all the other Quick Takes. I just love Fridays.

1.
Let us not forget to continue to pray for Haiti and those who were, and continue to be, affected by the terrible earthquake. We are such short sighted people with limited ability to concentrate on anything for long periods. We flit from one major news event to the next, leaving the old news behind without a second thought. We think, “Oh how terrible!” But then we move on to the next glittering story.

People continue to suffer in Haiti. Please go to Ben and Katie in Haiti to keep up with what is going on “boots on the ground” as it were. Remember to pray.

2.
So we are going to be selling our house. There will be more posts on this I am sure but for the moment I will tell you that my days are mostly consumed with going through my house and weeding out everything that we don’t use, that we haven’t used and that we don’t want to move when the time comes. I have been, over the last few years, working hard to overcome my rather sever case of BIMNIDS (But I Might Need It Some Day Syndrome). And believe me when I tell you that I regularly clean out cabinets and drawers and closets. But, this is a massive job. Where did all this stuff come from. Does it breed in the dark recesses when I am not looking? Has there been salacious junk hook ups going on behind my back? I will take control.

Volunteers of America is coming this afternoon to pick up a truck load and I do mean a truck load.

3.
HHBL has given me his old iphone because he got a brand spankin’ new 3GS. My ipoop, as I am affectionately calling it, is a most wonderful device. Or it would be if the wifi hadn’t stopped working on it. I have to tell you that it isn’t functioning as a phone because I already have a cell phone with service on Verizon. I like Verizon. I don’t like AT&T. But that doesn’t mean that my little device isn’t still most useful. I have downloaded several apps that I am just loving. But, the whole wifi thing is really annoying. I have spent several hours reading message boards and resetting things and all that stuff. Nada, zilch, zippola. So, this morning I will journey over to the Apple Store for an appointment at the Genius Bar. Hopefully they can help.

4.
The dog has been at it again this week. Last night HHBL and I had Blueberry Pancakes for dinner along with nice, crispy bacon and for me several slices of cheddar cheese. Cheddar cheese with your pancakes?? Well of course, isn’t that the way everyone does it? You know, salty and sweet. It’s good!

At any rate, HHBL and I got to moving some furniture and stuff after dinner and I started to do that before I had finished doing the dishes and putting away any leftovers. I totally forgot about the hunk of cheese that was sitting on the counter. We finish moving stuff, I go off to do something and I hear HHBL say, “Max! What are you doing?”  He had caught the dog slinking through the family room and looking really guilty.

And then HHBL asks if there was anything on the counter. I quickly check the rest of the  bacon, which was still there. We had eaten all the pancakes so I knew it wasn’t that. And I thought we were fine. And then I saw the empty piece of foil that had been wrapped around the cheese. But there was no cheese. Max had absconded with it to the family room. He immediately slunk into his house looking very guilty.

5.
Here it is , the first week of March and we still have at least 15 inches of snow on the deck. How depressing. Can’t see any grass anywhere yet. We need a string of 50F days to get some of this snow to say bye bye. The stuff has been melting but not fast enough for my tastes.

6.
You know what has been really hard about cleaning out….making the decision on which books go with me and which books go to the library book sale. That may not sound like a difficult decision for you but it is really tough for me.

Remember I have “Bibliographic Obesity”. And even though I have put myself on a bibliographic diet this year, pledging to myself that I will not purchase any books unless they are reference related, it is hard to get rid of those book pounds. But I am making strides. You should see the boat load of books that are being dropped off at the library this morning. And yet, there are so many still here.

It is a tough thing to be suffering from BIMRIA (But I Might Read It Again). That is a close cousin to my other condition that is rearing it’s ugly head these days. BIMNISDS (But I Might Need It Some Day Syndrome).

7.
How do you feel about politics? HHBL will tell you that I am rather passionate about them in my own way. I have had to reinstitue my “8 o’clock” rule which I put in place during the 2008 election. If it has anything to do with politics, whether for or against the way that I lean politically, I don’t watch it or read about it after 8p. It just gets me riled up and then I can’t sleep. If HHBL is watching something on the TV when we are lying in bed I will actually put my earplugs in and read.

Does that seem like an “ostrich with it’s head in the sand” thing to do? I don’t think so. I figure if it is something to do with politics I have probably already heard about it during the day and have thought about it. I value my sleep and thinking about politics after 8p interferes with my sleep. And we don’t want that. Ask HHBL. WE DON’T WANT THAT.