She's Obsessed I Tell You!

So, for your Saturday enjoyment. And because I have a busy day today and so the words must be few. I thought I would regale you with all the pictures that I took in Africa of the things that people carry on their heads. I am always obsessed with taking pictures of these things because I am just fascinated by it. I am always amazed by the variety of things that people transport on their craniums. So, without further ado........my obsessive pictures of people with things on their heads. With commentary of course. 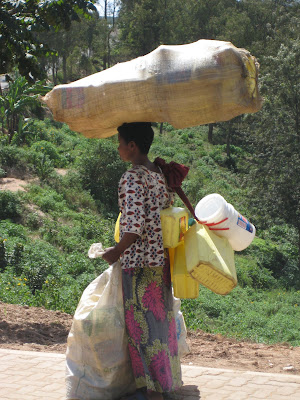 The yellow plastic jugs are what people seem to use to haul water in. I have absolutely no idea what was in the bag on her head. 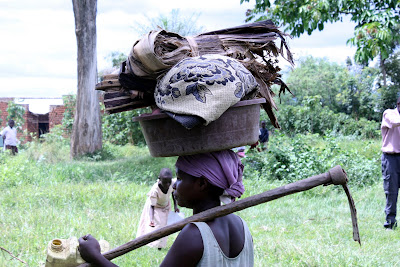 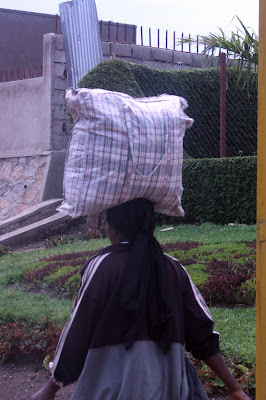 Hey! I have one of those bags. I bought it at the Flea Market a bunch of years ago. But I don't think I have ever attempted to stuff it full of things and carry it on my head. 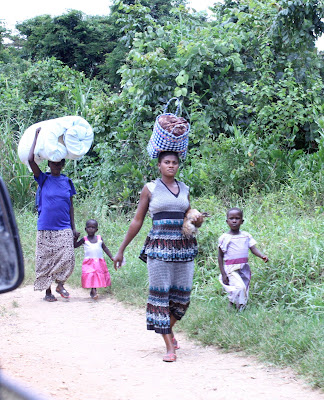 Yes, that crazy Muzugu woman is taking a picture of you from the window of the Land Rover. 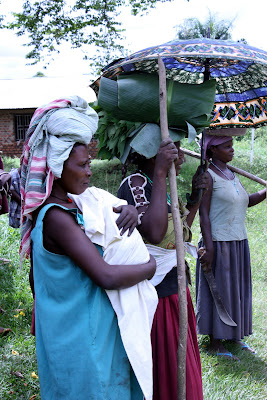 Don't you just ache to know what that woman is going to do with all of those rolled up banana leaves. I am still thinking of the possibilities. 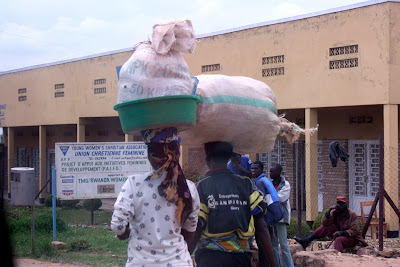 Can I tell you that sometimes these big bags contain potatoes. Lots of potatoes. We estimated that a bag that size, filled with good sized potatoes is most likely over 100 pounds. And they carry them on their heads. Think about it. 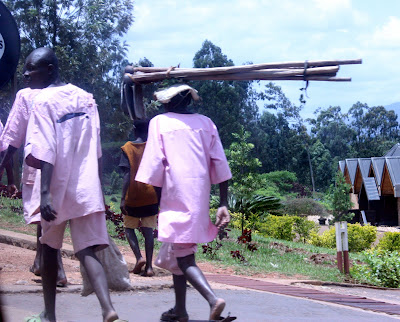 I most likely should explain that pink attire is not the norm for men in Rwanda. These men are wearing pink because they are prisoners. Specifically they are men who participated in the 1994 genocide in Rwanda. I will be writing more about that at another time.

Wow, everyone has something on their heads! And notice how they aren't just at the side of the road. No, this is a "multiple use paved surface" i.e. a road. And people like to walk in it as well as beside it. You just honk to tell them that you are there. But you don't slow down. I have more gray hair after riding in a car in Uganda and Rwanda.

Are you bored yet? Don't worry there are only a few more left to go. Although these are just a representation of all the pictures that I took of people carrying things on their heads. 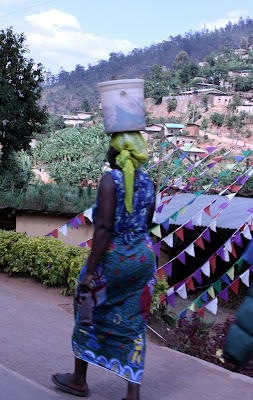 I don't want to know what is in the bucket. 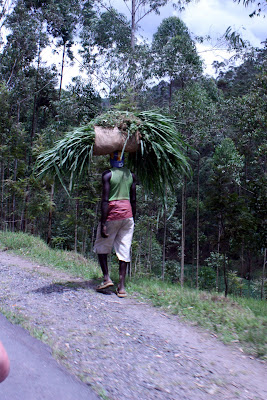 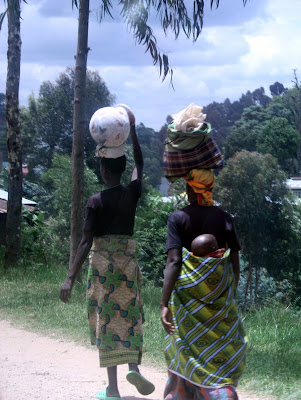 The woman on the left is carrying an upside down pot. Oh, I would have loved to buy one of those pots and bring it home. I saw them for sale at the side of the road. But, I had already forced HHBL and our driver, Issac, to visit several markets in order to get a specific colored wrap that I had seen on the a bunch of women and I thought it might be pushing it to make them stop for the pot too. 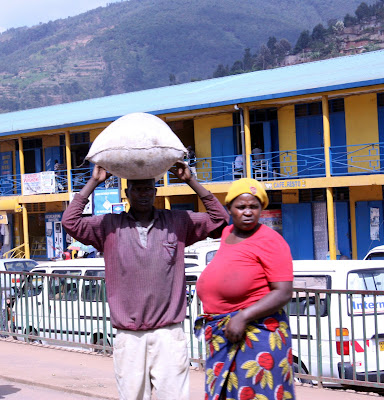 And to finish things off on a high note. I had really taken this picture because the man was carrying something on his head. I didn't think anything more of it until I arrived home and started processing the pictures and saw the woman standing next to him. All I could think was, "Wow, I bet she could stretch those things up and carry them on her head! But she might not be able to see where she was going."