This is a LONG post with pictures I promise. But there are some words first. Bear with me.

Also, later today in the sidebar will be a place where you can find all the posts relating to our Africa trip. I have had several people ask to be able to read all of the posts in one place. I will leave it up for a time.

So, you don't just up and one day look at each other and say, "Hey, I think we should go to Rwanda! That sounds like a fun trip." No, people generally go to Rwanda for a very small number of reasons. The main reason at the moment is to see the gorillas in Volcano National Park. Rwanda currently makes more money from "Gorilla Tourism" than it does with it's next largest export which is their excellent coffee.

We were not in Rwanda for the gorillas.

I probably should give you a bit of back "story" on this. Quite a few years ago now we made the decision to sponsor a child through World Vision. We had young children and we could not imagine what it would be like to be so poor that you had to have help from a total stranger in another country to help cloth and educate your child. We had enough and we wanted to help. It is super easy, you just ask to sponsor a child (click on the link above) and they send you the info, you say yes and away you go. Our child was in Brazil, we had her picture up on our refrigerator, we felt like this was something we could do to make a small difference.

Then in 2005 we added a second child, Francois, who was in Rwanda. I will be honest and say that at time I had almost no knowledge of Rwanda, other than knowing that it was somewhere in Africa. I couldn't have found it on the map to save my life. In June of 2005, when HHBL was given the opportunity to travel to Rwanda with World Vision, to see the work there and to meet Francois he jumped at the chance (wouldn't you?). I was unable to go but I lived the experience through HHBL's eyes.

And then the Lord laid a burden on our hearts. We had the resources and we could do more. So we decided to sponsor a few more children. We selected two countries, Peru because that is where HHBL's stepdad is from and Rwanda because we felt a pull for that country.

And since HHBL was in Rwanda in June '05 we have been trying to get back there to see our "children". It hasn't been as easy as you might think. We had the trip in the process of planning in 2007 when things fell through. It was a disappointment. Then in August '08 we were a month away from the trip when HHBL had his little medical "incident". Call me picky but I wasn't going to take HHBL to a third world country 4 weeks after a stay in ICU. So the trip was cancelled. But then this spring we got to thinking about The Engaged One studying in Uganda and that Rwanda is right next door (um sort of) and we really felt that this might be the time when the Lord would open the doors for us to go. So we started planning. A trip like this takes some coordination because World Vision has to give the OK and then you need a background check and lots of other things have to happen. You can't just show up and ask to see your "child", the child or children in our case need to be brought to a central location.

This is our story of our day with our children...

We were picked up early in the morning buy our driver who would transport us the three hours that it takes to get form Kiglai to the ADP (agricultural development project) where our children are located. It was a long trip and we were excited and anxious. Would the kids be excited to see us? Would the gifts that we had brought be the right thing (we lugged two suitcases full of backpacks with us). Would all the kids be there? 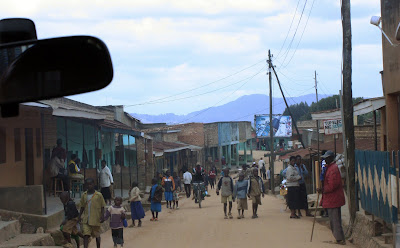 Eventually we made the final turns from the highway (a LOOSE term for the road) onto the unpaved village street and up a very bumpy and rutted road to a local community center that has been built by World Vision. 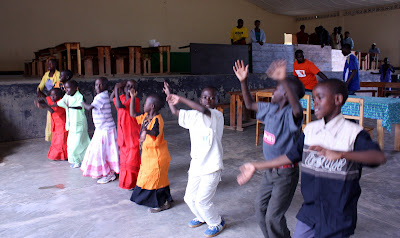 We could hear singing as we pulled up to the building. And when we walked in.....oh my! They were singing for us!!! One of these days soon I will put up the video but for now you will have to look at the pictures. There was a group to greet us with singing and dancing and the rest of the children were seated in a semi-circle of desks.

I can't begin to tell you what it meant to HHBL and I to see these children whose faces we look at every day (all their pictures are on a board in our back hallway), these children and their families who we pray for every day. It was almost overwhelming really. 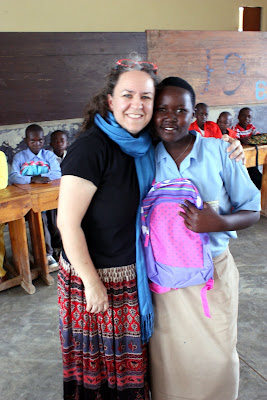 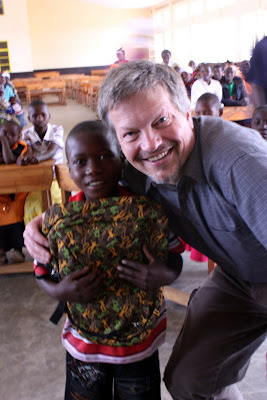 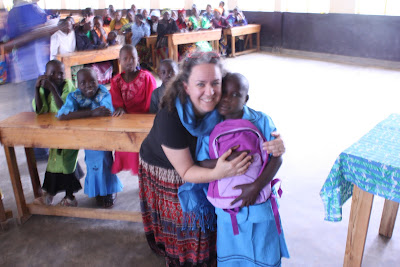 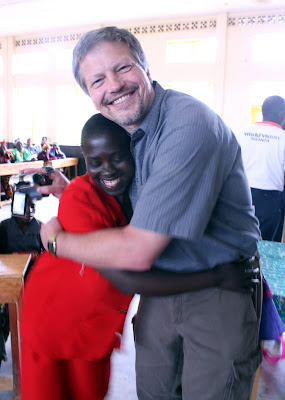 These faces, these children are so dear to us. We got hugs, lots of hugs. We got kisses, lots of kisses. And it would seem that the backpacks were just the right thing. 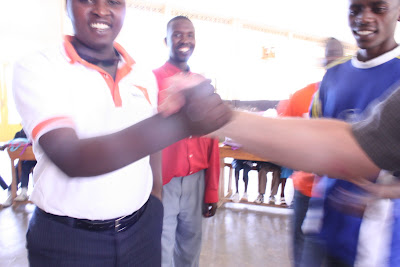 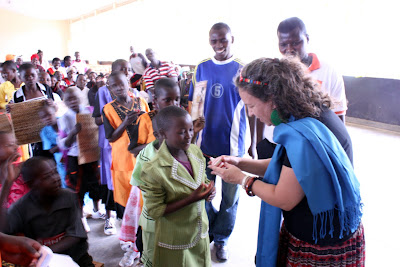 We had brought the kids gifts but we weren't expecting that they would each have a gift for us! Good thing that I brought a small bag with me. Can you see my really cool and REALLY big woven green earrings. I am going to be so cool at Christmas time. 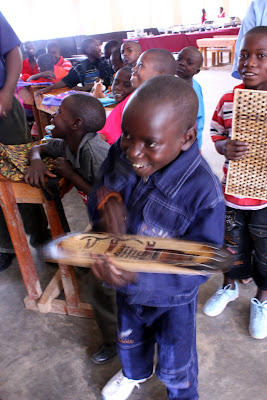 This is JMV and if there is a favorite among the kids he is it. He was my jeans outfit dude who was all smiles all the time. 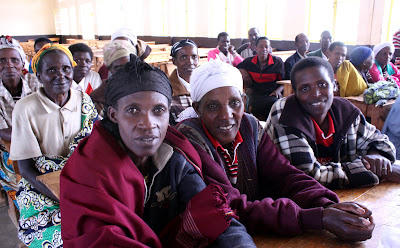 One of the other special things about the day was meeting some of the parents of our kids. They each brought one parent with them. In many cases they only have on parent in the home. I don't speak any Kinyarwandan and they don't speak any English but that just didn't matter. We met over a mother's heart. 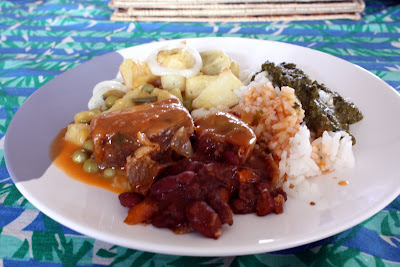 After all the gift giving and hugging and meeting parents and stuff we were able to share a meal with the kids. For many this was probably the largest, or only, meal that they would have today. It was a typical meal of rice, potatoes, beans, some kind of meat (not sure but it may have been pork) and a bunch of other things. It all goes on one plate and you dig in. Carb overload.

And then it was outside to get some pictures. This part was sort of like herding cats. Everyone wants to have their picture taken and then they want to see the picture that was taken and if it is a group picture then they all have to look to find themselves. Like I said, herding cats. 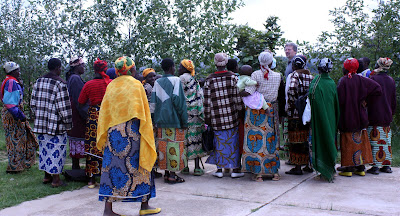 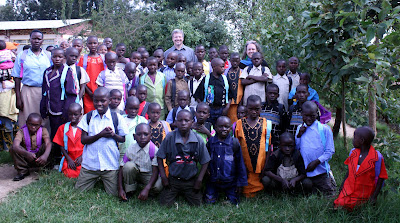 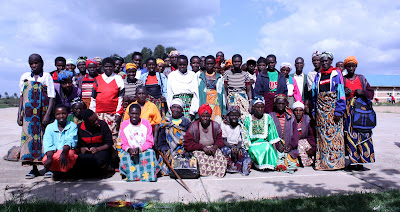 Their wonderful parents. How come we can't have colorful clothes too? 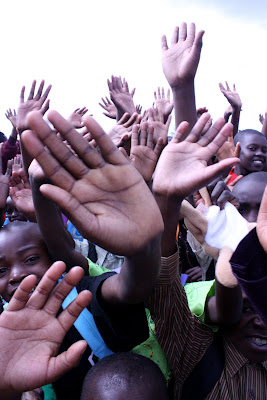 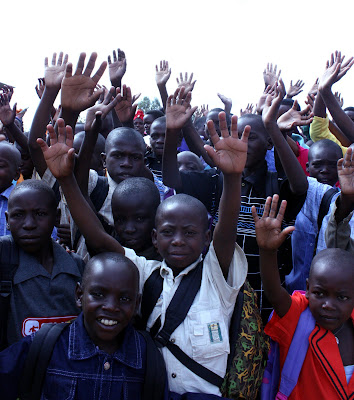 And so this is the reason that we were in Rwanda. To see our children. We may sponsor more that one child but in the end it doesn't matter if you sponsor one or fifty-one. What matters is that you take that step and sponsor. You will never be sorry that you did. We certainly haven't been.
Posted by Debbie at 11:34 AM