I have struggled with this post I will tell you right off the bat. It has been a hard post to write, harder than most others. Usually what I want to tell you seems to just flow from my brain straight down my arms to my fingertips and out onto the keyboard. But not this time.

Probably a bit of history is in order so that you can have some context for the pictures. I have written about the Genocide here so I won't cover that territory again but I want to tell you specifically what happened at Murambi between April 16, 1994 and April 21, 1994. In this one small place, in a small town, in a small country the size of Vermont.

By the time April 16, 1994 arrived the country of Rwanda was fully in the grip of the genocide. In previous genocides people had flocked to churches to claim sanctuary, a time honored tradition. This time it was no different. What was different was that often the clergy were in league with the killers. This time was no exception. 65,000 Tutsis were told that the church at Nyamata was unsafe for them, that they would be safe if they fled to the Murambi Technical School which was nearing completion at the top of the hill. That they would be safe up there because the French army would protect them there. So there they fled. But it was a trap. For you see, the purpetrators of the genocide had learned that people were easier to kill if they were trapped in one place. Almost immediately the water and electricity was cut off leaving people without food, without electricity and with only contaminated water to drink. And when they were weakened, on April 21, 1994, the Interahamwe sturck. 15,000 people were able to flee the school and took refuge in the church at Nyamata only to be discovered the next day and slaughtered. But the bulk of the Tutsis, 45,000 of them, were slaughtered there at the technical school on one day. The French troops disappeared, the Interahamwe arrived and brought death with it. Out of 45,000 people contained in that small space only four survived. And when the killing was done bulldozers from the town were brought in to bury the bodies. And then the French army came in and built a soccer field overtop to cover up the crime.

This is a stark place, visited by only about 4000 people a year. It isn't like you just drive by, you have to know that you want to go there. It is at the top of a hill at the end of a winding road. There is a large building out front where you are greeted by someone but there are few people around. We arrived on a Wednesday afternoon and the only people there were the cleaning lady, an assitant and the director of the memorial. We walked around the main building, over a brick pathway that is uneven, beside buildings that were obviously close to completion but now sit, frozen in time. 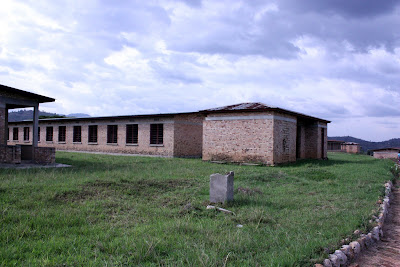 This is a silent place. There is a lack of sound here. The birds do not sing. There are no noises of bugs or people. The wind rushes through the long grass and there is the far off sound of children's voices but, on the top of the hill there is no sound. It is as if the earth knows what happened in this place. That it is a place of unspeakable horror and death and that the normal sounds of every day life have no place there.

HHBL had explained what I would see here, he had been here before. But even armed with that knowledge I was unprepared. I was unprepared to be upclose and personal with the face and reality of genocide. For you see, in these building are bodies. 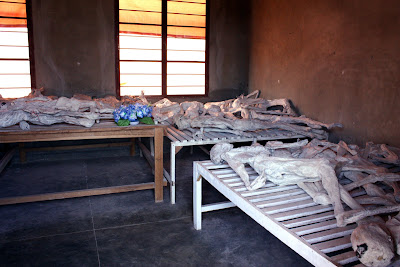 1800 bodies to be exact. In September 1995 the mass graves were dug up and the bodies were reburied all but 1800 of them. Those bodies were treated with lime and put on display here at the memorial. Put on display so that those of us who come to this spot will see and perhaps even slightly understand what happened here. 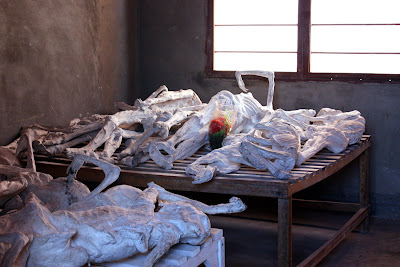 There is room after room of this. Room after room. The assistant opens the locked doors and walks on. The rooms are dimly lit with light coming from the windows that covered with tarps to keep the light out. At first my brain wanted to comprehend what I was seeing as representations of the bodies that were pulled out of the ground. But fairly quickly that is thought is dispelled. These are bodies, contorted in the agony of death. They bear the marks of the death that they suffered, machete marks. Hands, arms, feet are missing. These deaths were upclose and personal. You are struck by the smell. There is no amount of lime that is going to totally cover up the smell. You stand there and it begins to sink in that these were parents, grandparents, siblings, husbands, wives, children. These are recognizable as bodies, as people. Some have hair still on their heads or perhaps a piece of clothing.

I took two pictures and then I had to stop. I just couldn't take any more pictures. Two was enough. Because I won't ever forget what I saw. I don't need a picture to remember.

After viewing room upon room of bodies you can go over to a large room where all the clothing is stored. 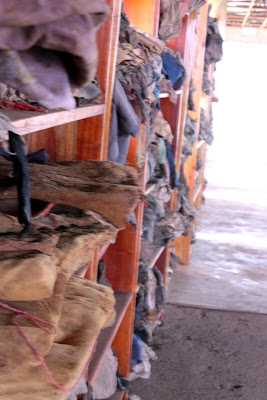 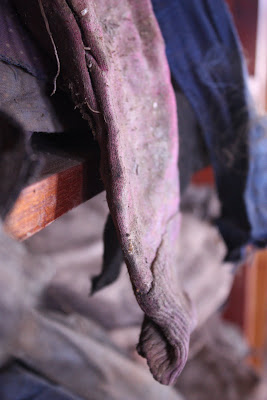 I have been to Murambi. I have seen a small, small glimpse of genocide. I will never forget. I will never be the same.
Posted by Debbie at 1:45 PM