Well, you are going to have to put up with more posts about Africa, I have a bunch more in me so be prepared. I am just warning you.

So, we spent some time on the Western edge of Uganda, specifically in Bundibugyo and Nyahuka.

Where is Bundibugyo you are asking yourself (you know you were). Well it is here 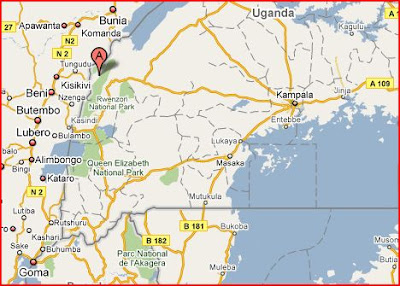 Can you see where the little "A" marker is? That is Bundibugyo. It sits about 10km from the Congo border and Congo isn't necessarily a place that you want to visit at the moment. If you look to the left on the map you will see Kampala and just below that you will see Entebbe. We flew from Entebbe to Bundibugyo. It doesn't look like a long way and reality it isn't, just about 150 miles. But that 150 miles takes you 14+ hours to drive. So we flew, which only took an hour and a half. 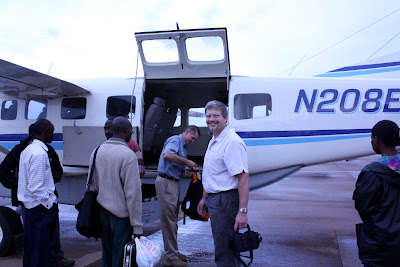 We flew in this. This is a small plane. It is a small plane and you have to have all of your baggage and YOU weighed so that the pilot knows exactly how much...you weigh. I had to step on a scale with my one little carry on bag in front of God and the Entebbe airport staff. Not a good way to start the day. But I digress. 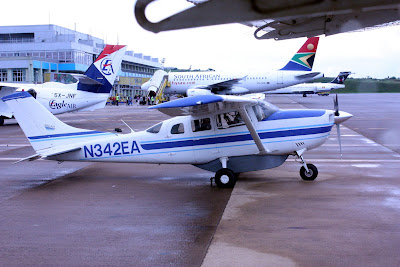 Thankfully we didn't have to fly in this plane. It is REALLY small. And it was going to a place that I don't want to go at the moment. The African Inland Mission plane was taking two young men up to Sudan to do some sort of work. I didn't ask. I didn't want to go to Sudan.

Like I said, it was a small plane operated by African Inland Missions. Our pilot, Ron Pontier, is what I would term a "steely eyed missle man". I don't know Ron well obviously but I am thinking that there is very little that phases him. Once you have spent two weeks as a captive of rebels in Sudan then um, other things that might happen aren't quite as bad. He has a very dry sense of humor. 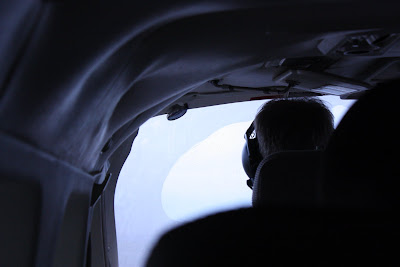 Ummmmm, I am not sure that you are going to see the pilot of a big commercial airliner wiping the condensation off of the windshield so that he can see to taxi...and fly... 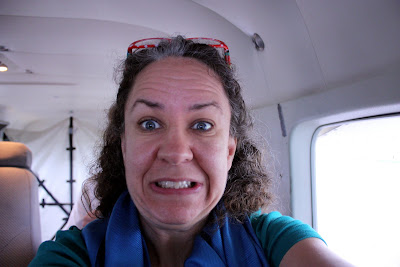 This is me thinking about Ron wiping the condensation off of the windshield. Is it too late to drive to Bundi? 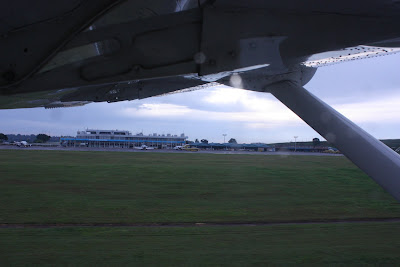 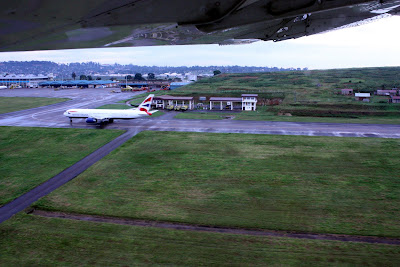 But after that we were off. This isn't my first ride in a really small plane but I am always surprised at how quickly these things get off the ground. And how close you feel to that ground as you are flying above it. 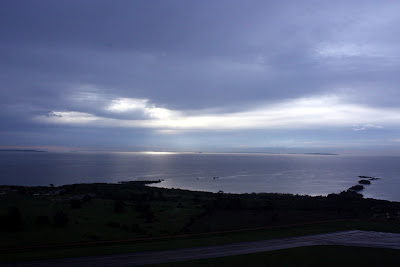 We zoomed past Lake Victoria as the sun was rising. Oh was it pretty. 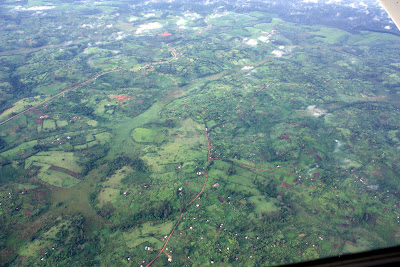 We zoomed over the greenness that is Uganda. 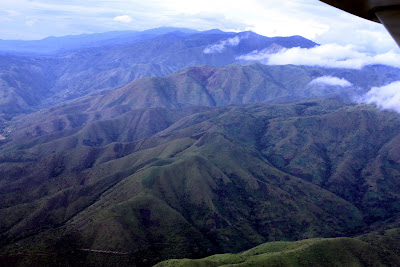 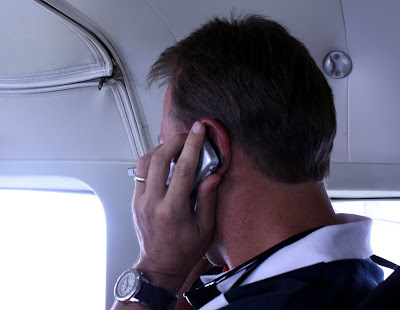 Ummm Doug, I don't think that jives with FAA regulations 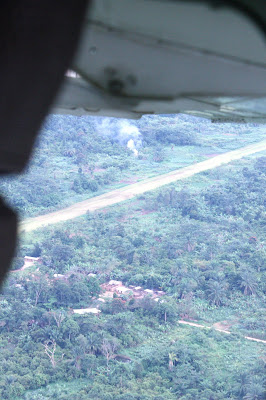 See that little thing that looks like a road? It isn't. It is a small grass airstrip, the Bundibugyo airstrip. That is where we are going to land. Fun times! 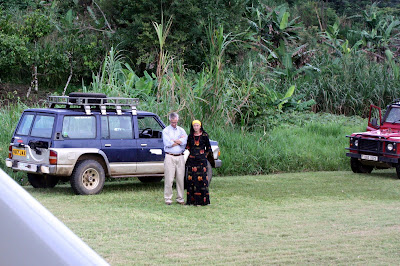 We were met by Pat Abbott and the Drs Myhre (Scott and Jennifer). The Myhres are connected with World Harvest Mission and in late 2007/early 2008 were at the center of the last outbreak of Ebola virus. A scary thing to be sure that you can read about on their blog paradoxuganda. 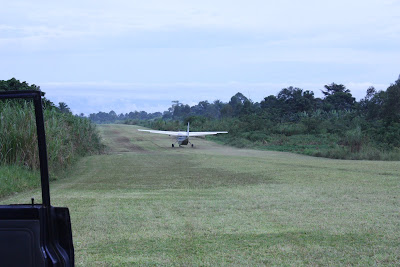 We were on the ground, unloaded the plane and then Ron was right back down the runway and off to several other stops including one in Sudan. We want him to come back safe and sound because he is our ride!

So then, the next day, we had to do the flight all over again only in reverse. Not really reverse because, as far as I know planes don't fly backwards. I will ask Pilot Man about that though just to be sure. So the next morning, after a "restful" evening at the Hotel Vanilla ( a story all it's own), it was back on the plane and back to Entebbe. 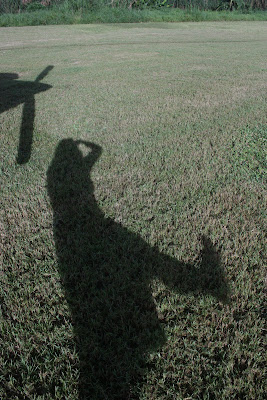 I was bored while waiting for the plane to get ready 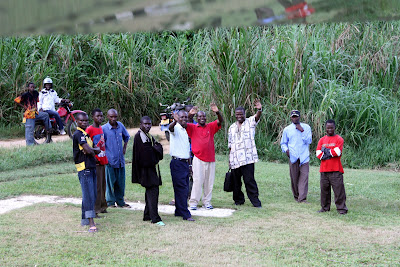 Goodbye silly Muzungu people who are flying in that very small plane. 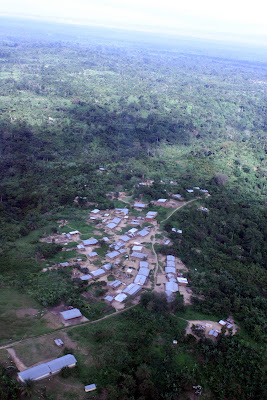 Look! That is where we stayed last night. 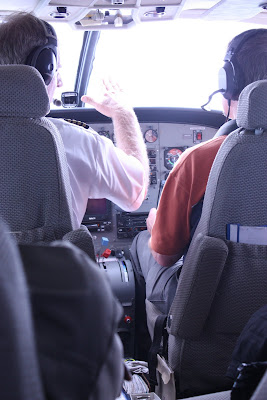 "So when you see the runway you just keep the wings level and you should be just fine"
I'm just kidding on that part. HHBL didn't land the plane. I love him with all my heart but.... 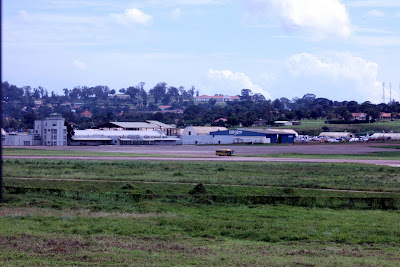 And finally, we were landing back in Entebbe. All in one piece with another story to tell.
And to make it just a perfect day, as we were leaving we drove past the old building in the distance where the Raid on Entebbe happened. Man I love history. But that is for another post I think.

Stop by tomorrow so that I can tell you about the main reason why we spent some time in Rwanda. You are going to love it.
Posted by Debbie at 7:14 AM