I KNEW I Would Use It Someday!

I think I have mentioned, somewhere along the way, the fact that there is a street lamp positioned perhaps 30 feet from our bedroom here at Chez Knit. It is something that we didn’t really notice when we purchased our little home on the hill. Why would we notice it other than to say, “Oh look at the lovely lamp posts!”. We always came to view the house during the day. The fact that the bulb situated at the top of the lamp post puts out about a million candle watt of light ALL. NIGHT. LONG. would not have been apparent to us until we actually slept here. And it wasn’t really apparent right at first even then. We had just begun to wonder about the overly bright appearance of our bedroom at 2 am every night when…..the bulb in the lamp post gave a fizzle and a wink and went out.

Oh how lovely it was to NOT have that lamp burning as a bright beacon of the insecurity of others in the neighborhood. When the annual meeting rolled around and others were complaining about the street lamp that was out…..we stayed silent. We had hopes that it would be permanently out. A dark hole in the overbrightness in our neighborhood that can probably be seen from space.

We reveled in the dark. We smiled fondly on the street lamp that wasn’t. We hoped in vain. Come summer, they fixed it and again the beacon of interrupted sleep shown into our window and lit up our bedroom like a Roman candle on the 4th of July.

And we did not sleep well.

And we were cranky…or more cranky than usual in my case.

In case you are wondering, there was a shade already on the window otherwise we would often be giving the neighbors who walk in the evenings a very rude shock. But that shade only cut the light somewhat. There was still light and plenty of it. What to do…what to do…other than taking the air rifle and shooting the lamp bulb out like some Light Activist Anne Oakley. The police station is just down the road. HHBL could visit me regularly. And it is probably dark enough there to get some sleep.

I struggled with what I wanted to do as far as window treatments were concerned. And lets be really honest here, I am a frugal person (Stop looking at the yarn stash! Nothing to see there!) and I didn’t want to just go out and buy something that I hated in order to cover the window and get some sleep. But it got to the point in December where I threw up my ample digits in frustration, went and got a blanket from the closet (a Mexican “throw” that had been in the family for years) and nailed it up all around the window to block some of the light. Our bedroom window looked like something from a frat house. And it cut the light…..somewhat…..and bought me a bit of time to figure out what to do.

The question still remained what to actually put up. As I was wandering around Target I came upon a curtain rod that I liked so that question was answered. But a curtain rod is not all that efficient without a curtain. And this curtain needed to be fairly light limiting. I was rooting around in my work space and what should I spy but a quilt top that I have had forever. It was pieced by my Great Grandma Maggie Pringle. 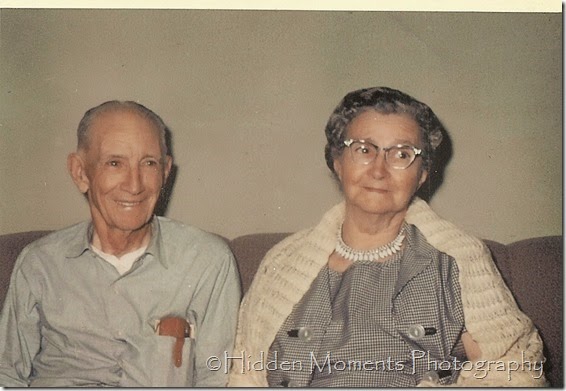 Gosh aren’t they just the cutest. This is AJ and Maggie. She had the cutest little chuckle you have ever heard. Have I ever told you about the time they tried to teach her how to drive the car? She had only ever driven horse and buggy. She was behind the wheel of the car and attempting to put it into the garage and couldn’t remember how to stop the thing. She kept saying, “WHOA! WHOA!” …..as she and the car proceeded to go into the garage and then continued out the garage through the back wall. She never drove a car again.

I digressed didn’t I?

At any rate, when Maggie died several months before HHBL and I were married the family traveled out to Iowa for the funeral. After that was all done we wandered around her little place for a time just picking up mementoes to take home with us. I am sure if this happened NOW I would go for pictures and any diaries but then I just wandered around until I spied a quilt top sitting in a corner. It was sad and bedraggled and it was obvious that it had been finished but then someone had, for some reason I cannot fathom, cut a large chunk out of one corner. Really? But I took it and stored it away. It has been carted from Iowa to Illinois to the Frozen Northeast Ohio. It has been stored in one apartment and four different houses. Numerous times I have almost just given it to Goodwill but something always stopped me. And I knew that now was the time to use it. So I sashayed over to Goodwill and bought two very dark and heavy sheets to line the quilt top and give it some extra thickness. I sandwiched them all together and did a bit of sewing magic and…….. 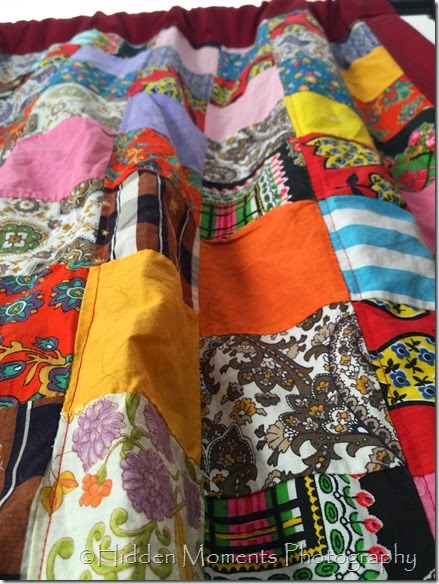 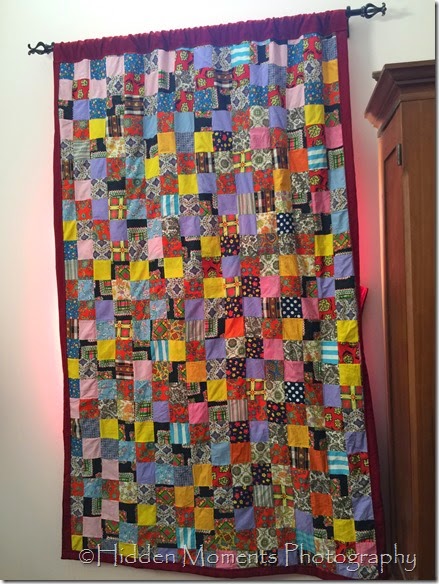 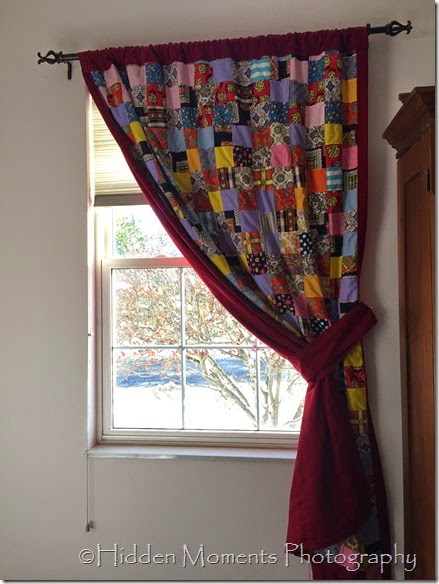 I am completely in love with my heavy curtain. I would so love to be able to ask Maggie about all the squares and where the fabric came from. Can the dark come just a bit earlier today so I can see how well it cuts the light.