Now back to my Saturday. I had cleaned the floor. I had done a bit of work. I had answered emails and inventoried the freezer and the canning goods. And then it was on to harvesting some of my basil. I had several basil plants growing on the patio this summer and they have been all happy and please pick more leaves for your pizza. But we are making our way towards Fall and they are getting a bit tired. I figured that I would just "top them off" and see if I can force a bit more growth out of them before the end.

Out to top off the basil I go. Look at the pretty sky. Happy sunshine shining down. All is right with my gardening world.

In I come with the basil in hand, putting it down on the counter. Lovely green basil. SO happy. I get all my stuff prepped for drying. Paper towels? Check. Old and clunky but still functional microwave? Check. I go to pick off the leaves so that I can dry them in the microwave.......

And something flies out of the basil at me.

I should probably tell you that there will now be some bad language. You have been warned.

Where were we? Ah yes, something green and possibly the size of a 747 flies out of the basil at me.

At this point I might have screamed just a bit. Or more than a little bit. And, even though I will deny it if you mention it, I might have done a little jig in the kitchen. Sort of a jumping around and waving my hands in terror kind of thing. My biggest fear, other than the fact that I wasn't exactly sure what had scared the ever long poopoo out of me, was the fact that I didn't know where the offending green flying agent of insect doom had actually landed. I stood there for a moment in quivering fear, waiting for little insecty feet to start climbing on me. It has happened before and I have never quite gotten over it.

And then there was movement. Right there on the lip of my clean coffee travel mug. I drew a deep breath and moved closer. 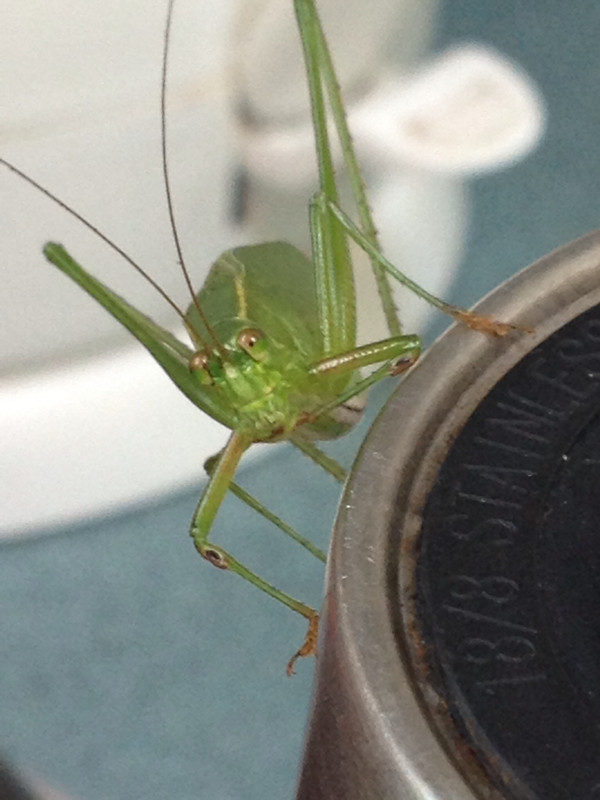 I looked at him. He looked at me and had the audacity to rub his little front feet together as if in anticipation of doing something awful to my psyche.

And then I thought, "I have to take a picture!"

You know I would. How could I not. Thank goodness I had my iPhone in my pocket because I didn't want to actually step away from him in case he decided to go walk about. Several pictures later I was then confronted with what to actually do now. The easiest thing, it would seem to me, was to just carefully pick up my coffee mug and transport the offender to the outside. He was big. I wasn't going to actually smack him with anything because that would then cause a major exposion of bug guts and i just didn't think I could handle the clean up. Call me squeamish. I picked up the mug. I took two steps.....

And he flew at me with evil intent.

I might have dropped my mug, screamed a bit more and yelled some words that even I cannot put up on the blog.

I didn't feel any evil buggy feet crawling on me so I figured, correctly, that he had flown somehwere else. There he was, walking along my cabinet, bold as you please.

What to do now??? I SO wasn't going to actually pick him up. I am brave but not stupid. Then the lightbulb went on. I will get a plastic container and put it over him, slip a piece of paper under to slide between Mr. Locust and the cabinet, thereby trapping him in my homemade cage and then I will transport him outside. The first part worked like a charm until I realized I had forgotten to get a piece of paper.

I removed the plastic container and Evil Locust moved on to climb around on my window. By this time I had both plastic container and paper in hand and I managed to trap him. But even at this time he was still trying to fly out and kill me. He kept throwing himself at the paper as I quickly and gingerly carried him to the sliding screen door.

And then another problem arose. How to get the dang door open. My hands were very much tied up in keeping the killer from getting out. I stuck my little pinky out like I was at High English tea, slid the door open, and just as I did that....... the paper slipped away from the plastic container and Evil Locust made a break for it.

I screamed yet again, loud enough that the neighbors might have thought to call the police. I didn't see where he flew to but I decided to take it on faith that he didn't want to be inside any more than I wanted him to be. I quickly shut the screen door and retreated to my woman cave to survive.

If I act this way with just ONE Evil Locust can you imagine how the Egyptians felt!

Posted with Blogsy
Posted by Debbie at 9:34 PM