I Look For The Thing That No One Else Sees 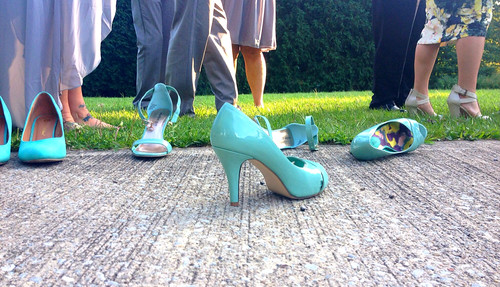 Even when I am not the wedding photographer I still have to take the odd photo. The wedding was finished. The Bride and Groom were beaming with joy. I was frantically trying to get the rest of the wedding party gathered in one place all the while directing the guests to go a different way around so that they could enter the building where the reception was being held. Dani and Dan had specifically asked me to make sure that they had 10 minutes to themselves after they walked back up the aisle so that they could spend those first minutes as husband and wife alone together.

I was determined to make that happen and I did.

Everyone was gathered in the right place. I was here. I was there. Telling people what to do.

And then I saw the shoes.

I wanted to grab the photographer and make her take a picture of the shoes. The way that they were scatterd on the concrete just spoke to me of the relief that the girls must have felt as the took off those agents of toe manglement. They were a beacon of the happy event.

But I didn't. She was a young photographer who had never shot a wedding before and had barely had time to take her camera and kit lens out of the box. She was working hard and I wasn't going to break her concentration. I am not sure she would have even seen the beauty fo the shoes. Perhaps I am selling her short on that, she might have seen what I did.

But photography wasn't my job that evening. I really did have to remind myself of that several times as I might have stood in a different place or crouched to take a photo at a different angle. I had to content myself with taking out the trusty iPhone, crouching down and trying to translate what I was seeing in my head. A unknown family member was standing there as I took the time to take a picture of the happy shoes. He looked at me quizzically and inquired as to what I was doing.

I am a photographer and I look for the thing that no one else sees.

He will just have to be content with that.

Posted with Blogsy
Posted by Debbie at 8:34 PM